A Would-be Elusive Site in Paris... 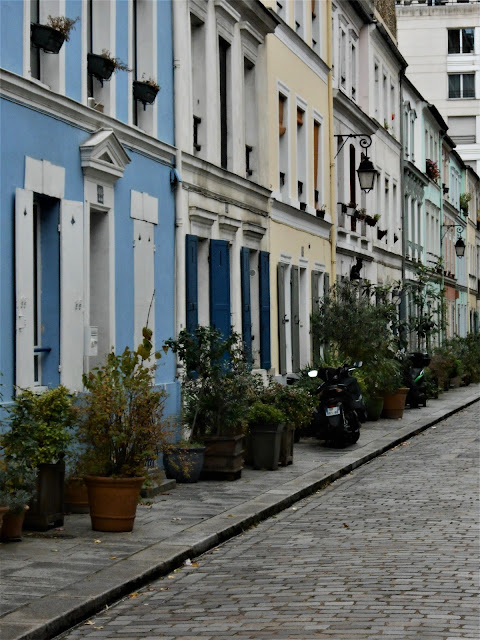 Over the past few trips to Paris, I have been experimenting with a self-imposed 'no-purchase' policy. No, that does not mean that I've branched out into bouts of shop-lifting... 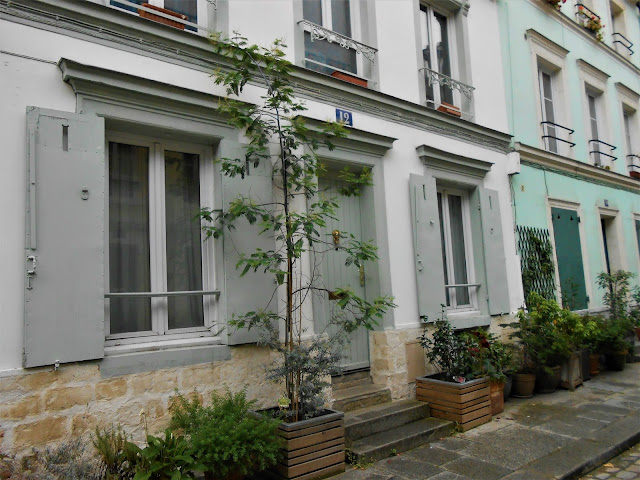 Instead of spending a large part of my time shuffling in and out of a random selection of shops and stores, I have been passing the hours wandering around the streets, sites and spaces that make up the city. 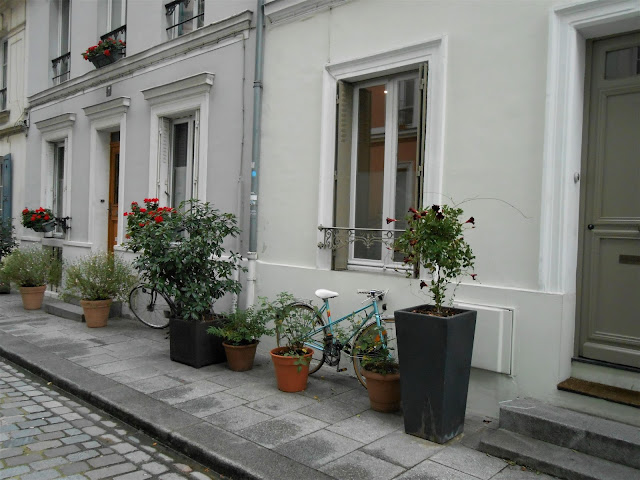 This rule of roaming has not, however, ruled out cafés. The bright autumn light this year seems to lend itself to this particular activity. 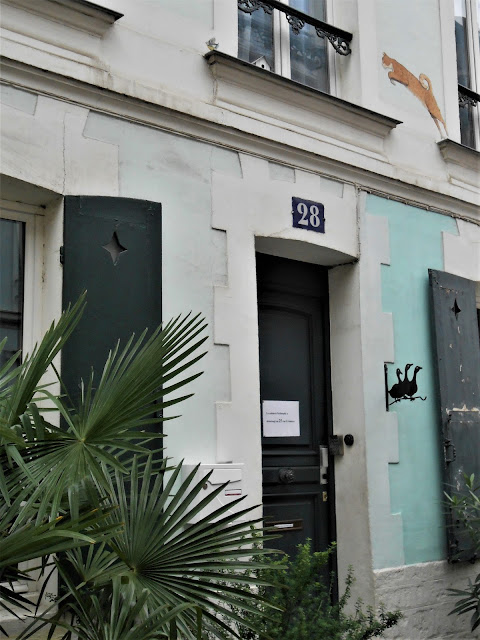 On one visit, whilst making my way through an oddly unattractive area in Bercy, I looked up a side street to see a weirdly incongruous sight that appeared to be a throw-back to the 19th century. 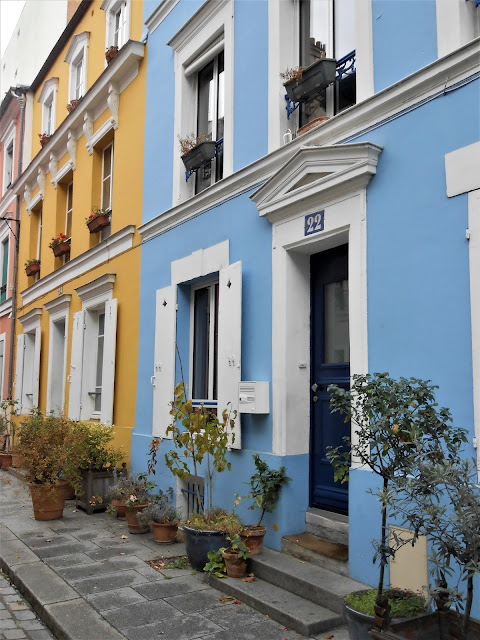 This place is in a strange part of the 12th arrondissement, near the majestic Gare de Lyon surrounded by a muddle of mismatched buildings that span almost two centuries. 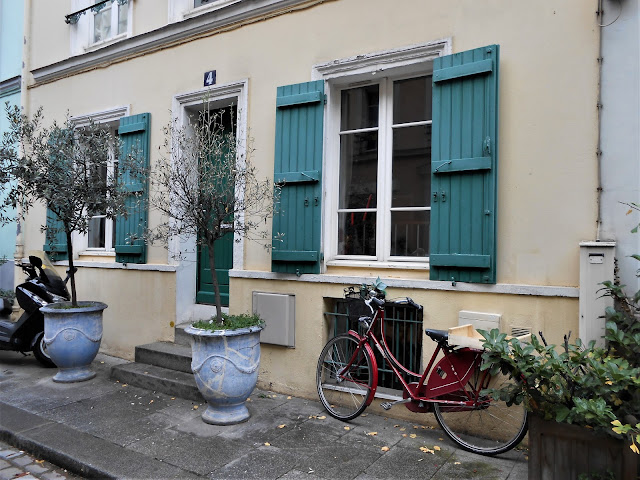 Imposing Haussmann boulevards are dissected by construction work that seems to be constantly underway, with scaffolding, cranes and board fencing clogging the skyline and ground level alike. 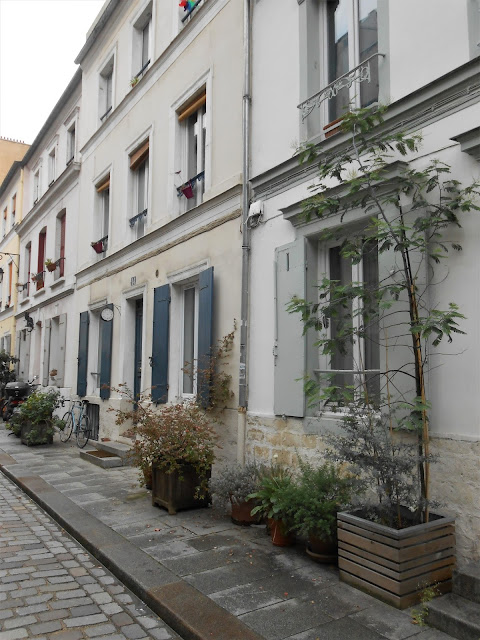 I naively thought that I had made quite a discovery, amazed as I was to find a street, deserted of cars and crowds. 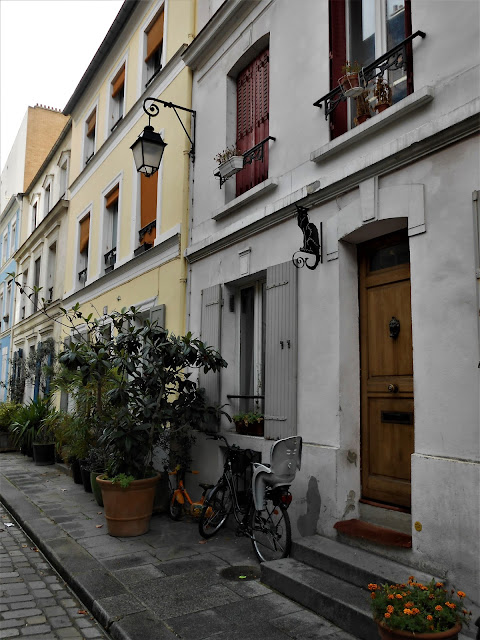 The inhabitants actually sit out on their door step, reading, smoking and watching the world go by. 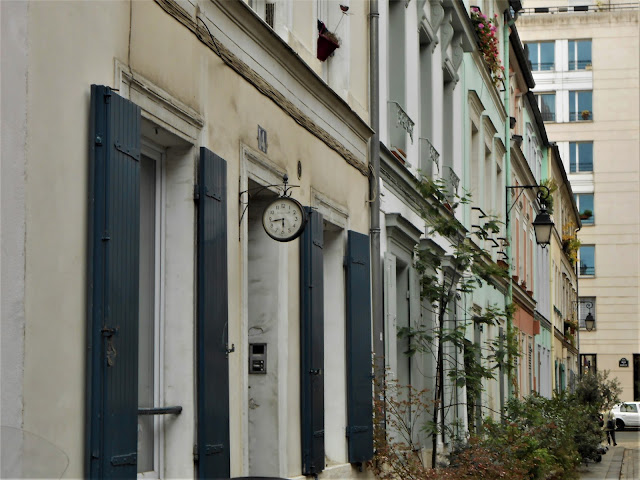 A few cats even stroll by with great nonchalance, indifferent to the interest they incite, and whilst not camera-shy are not up for any photo call - with me at least! 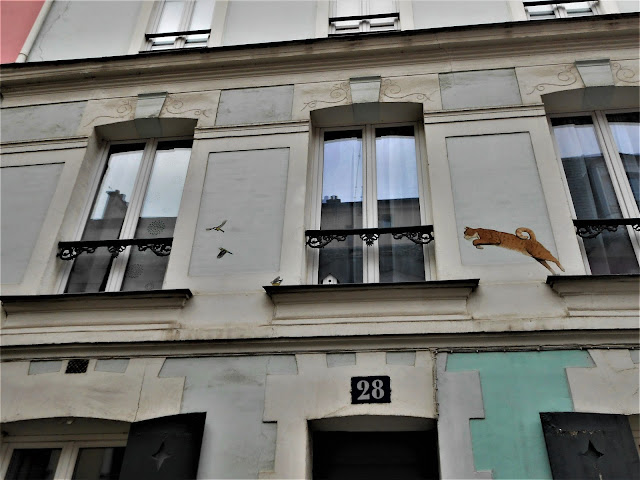 Looking into its history, I realised that this street has a certain notoreity, especially over these last few years… 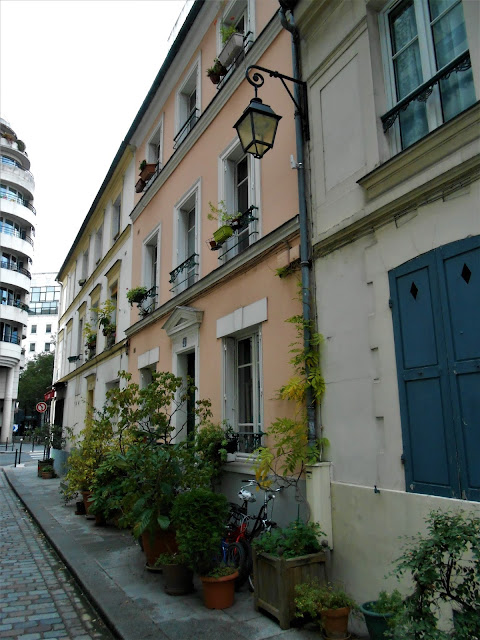 The atmosphere that reigns in this relatively small street is not simply down to the lack of cars... 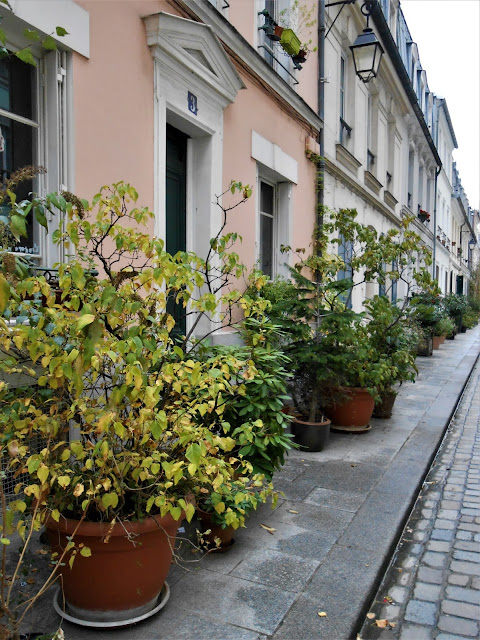 The architecture itself, of modest 19th century construction, has been uniformly preserved. 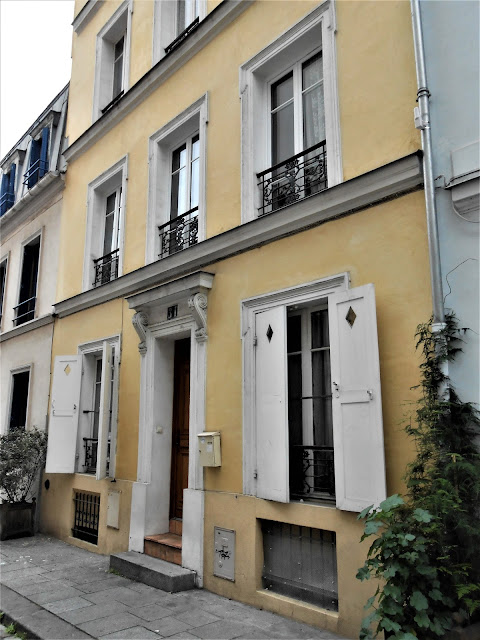 The buildings stretch out without any visual instrusion of the 20th century, thus creating a certain harmony. 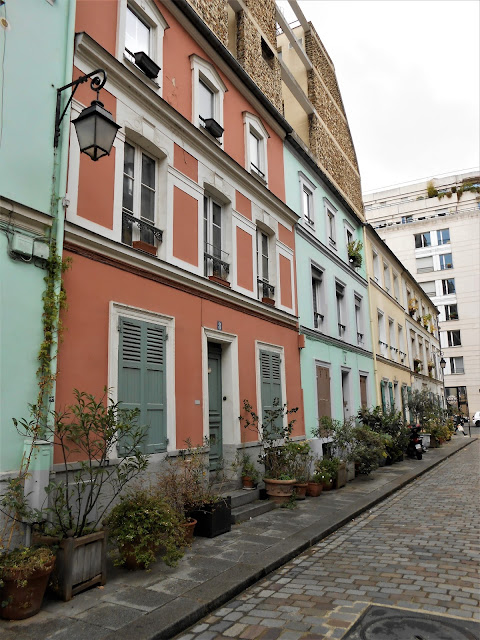 The paintwork of the façades, meanwhile, creates another effect again. 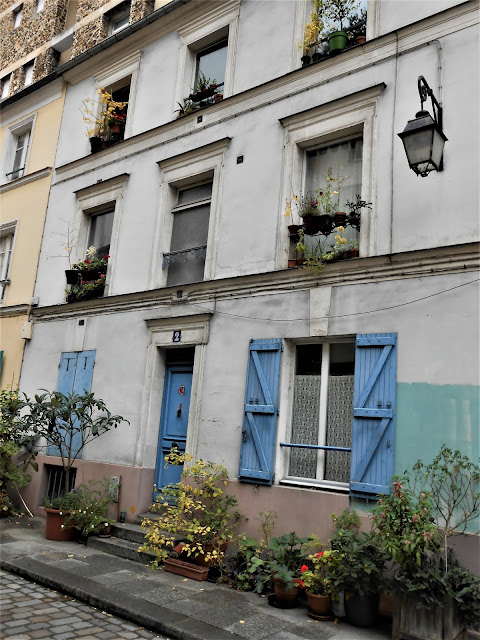 Here, delicate pastels are set next to more vibrant colours – all of which produces a vitality and warmth amongst the grey – la grisaille -  of the surroundings. 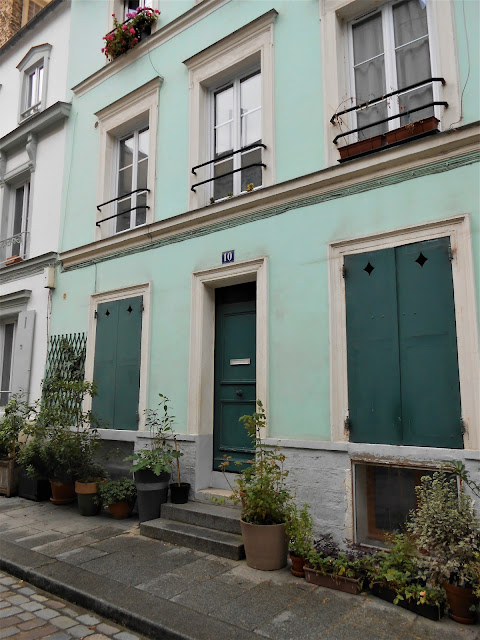 In addition to this, a few quirky mural features have been added. As painted magpies display stolen jewellery on one façade, a cat leaps from one window sill to another in pursuit of blue tits, lizards scurry across shutters, whilst in the background the branches and blooms of a wisteria vine gently droop down... 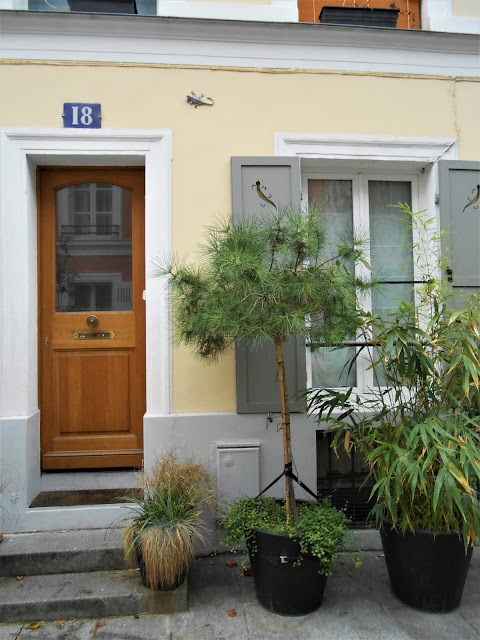 Not only have the residents paid attention to the aesthetics of their façades, they have also taken care to ‘dress’ the pavements accordingly... 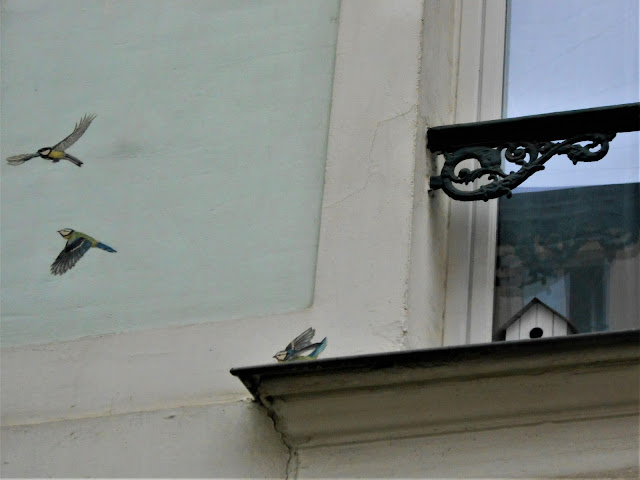 Large potted scrubs, bushes and flowering plants run along the street. Instead of banal urban tarmac, the street has kept its jigsaw of paving stones. 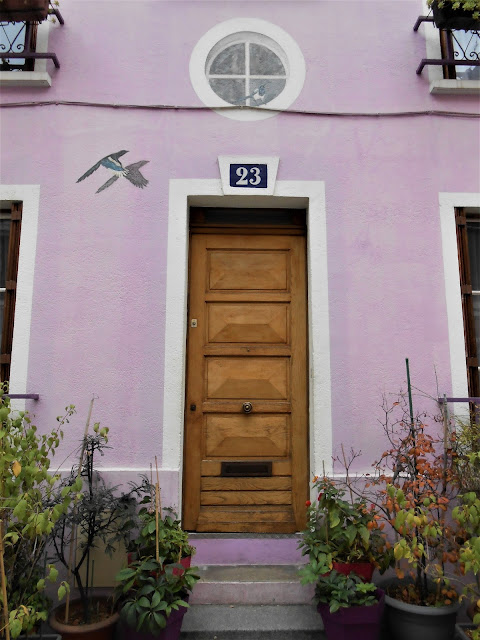 Speaking to one gentlemen resident, I heard that part of the ‘deal’ set up with the council in 1993 was that the street would be pedestrian, on condition that the locals respected the character of the place. The CHRC (Comité des Habitants de la Rue Crémieux) have certainly done so. Created on the site of the ancient Arènes Impériales, this cité ouvrière was opened in 1865 by the Compagnie Générale Immobolière. 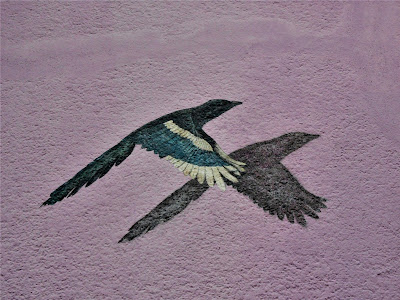 It was built to house workers, and as such follows the design of other workers’quarters – thirty-five dwellings composed of six rooms, set over two floors. It reminded me a little of the fishermen’s quarter at  the seaside resort of Le Tréport. 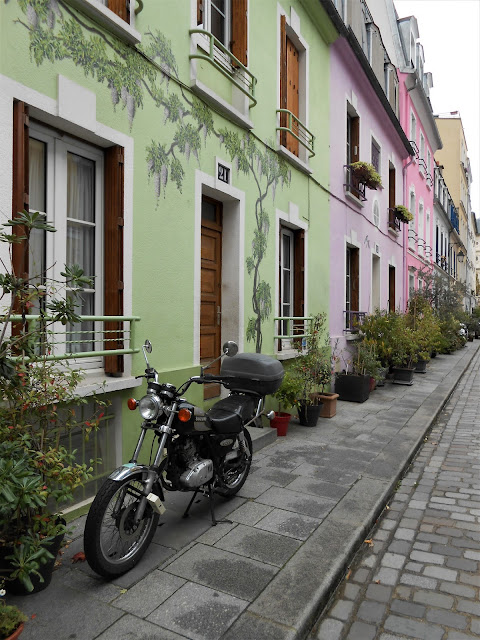 One resident in the 19th century noted that ‘Chacun est maître chez lui’, which could be translated by 'Home, sweet home’, as it highlights the fact that the homes offered a life free of landladies, tenants and the dreaded concierges. 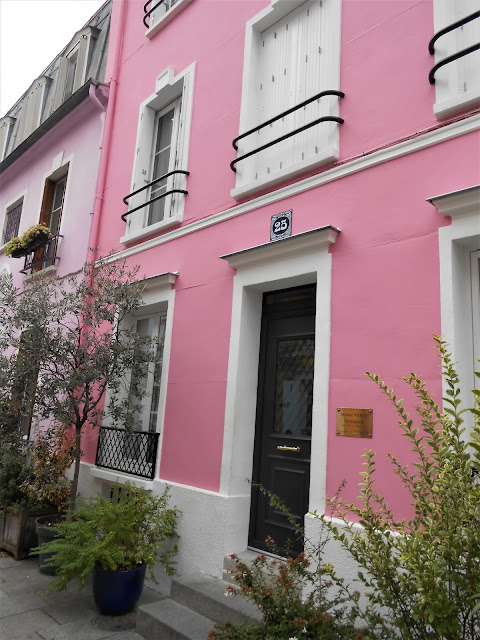 Little did he know, however, that one hundred and fifty years later, the street would be subject to another threat, poised, or rather posed, to wreck its peace and tranquility. 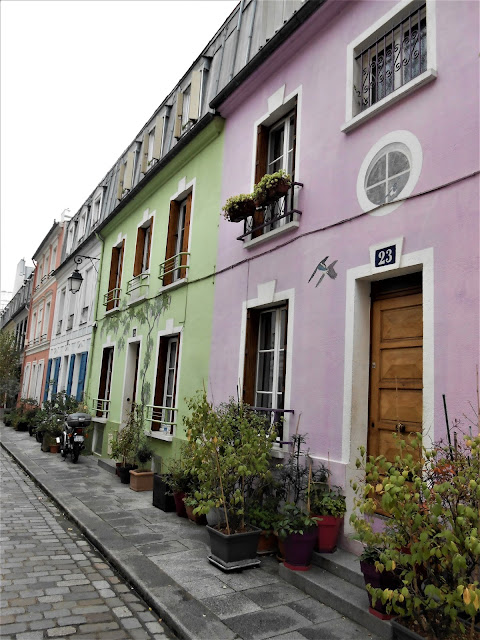 With the advent of the smartphone, social media and the selfie, this beautiful haven of pedestrian calm has become the backdrop of choice for hordes of young girls - fashion vloggeuses and bloggeuses for the most part. 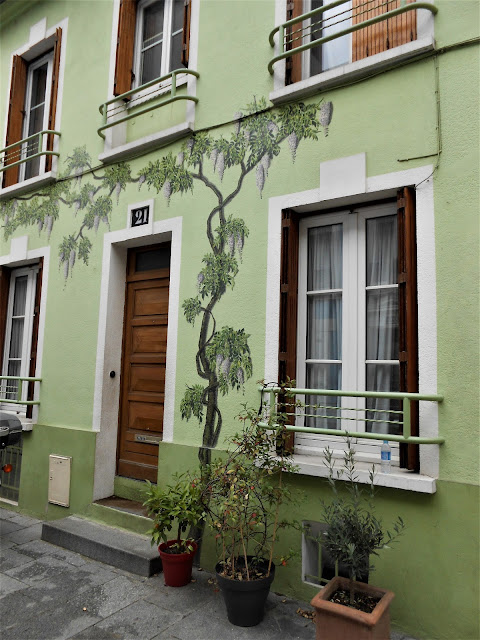 Although early mornings on grey, overcast days seem to dampen enthusiasm, these visitors frequent the place in considerable numbers, eager to have 'leur look’ trendily ‘shooté’ in the street, ready to post online. This goes from scatterings of solitary girls, or sweet giggly pairs, who come along for a few innocent souvenir shots, to others prepared and fully equipped for a veritable marketing mission for the merchandise promotion of some magazine or other. 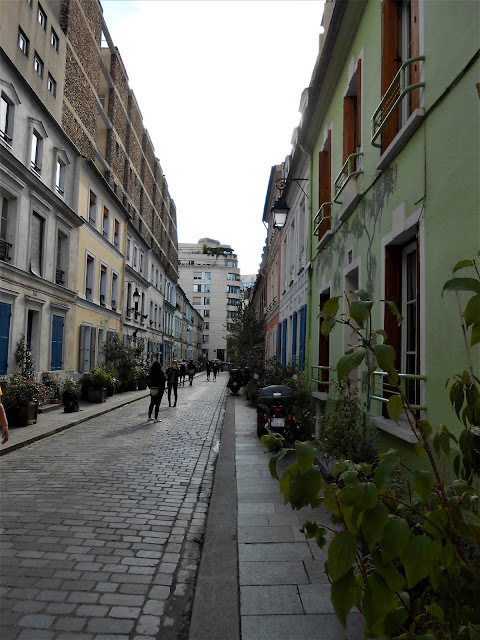 The most determined young ladies crowd the site, traipsing along the paving stones in their latest outfit, pouting, preening and prancing for the camera. In order to get ‘La' Photo, they readily squat doorsteps, drape themselves in front of window ledges and prop up against the potted bushes, even queuing up for the privilege of doing so! Apparently the residents have had enough of this teenage tsunami, literally treading on their toes. Aware of this second-time round, I did indeed feel guilty and hypocritical turning up again, even if I had absolutely no intention of taking any selfie shots and am fully conscious of the fact that I passed the ‘spring chicken’ sell-by date quite some time ago! 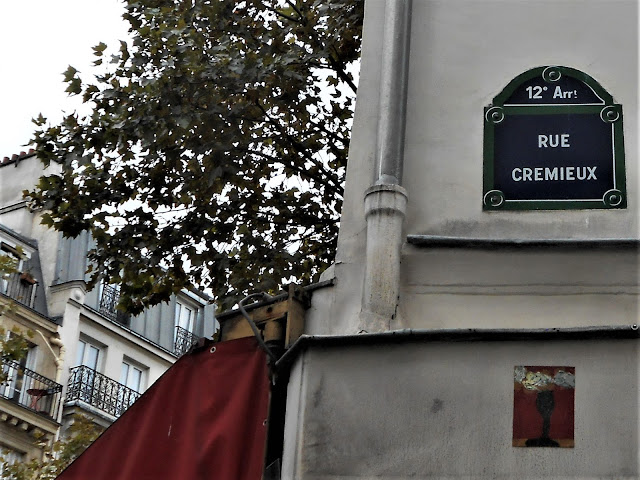 Aside this wave of 21st century follies and foibles, there are indicators that the street has been victim to other floods in its history. Indeed, it was largely submerged by the alarming waters of the River Seine in 1910 that reached an impressive height of 1m 75. By this time, it had already shed its intial name, Avenue Millaud, to take on that of a famous politician, journalist and lawyer…
Sssh - keep that name a secret ! 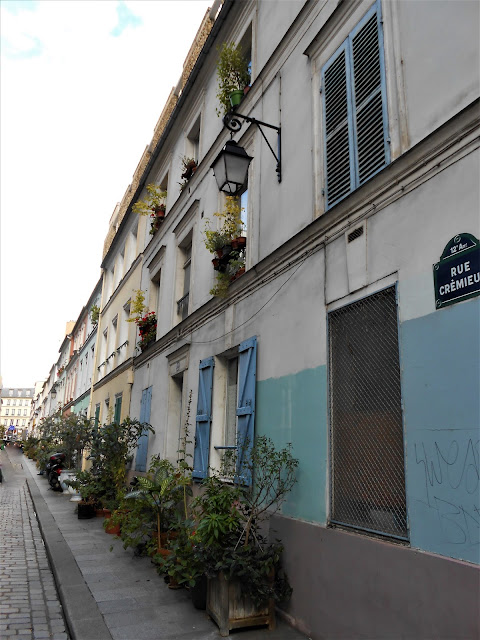 Above all, this site shows how much can be achieved with relatively little; no need to revamp excessively, just ditch the vehicles and you are half-way there. Likewise, no need to seek fulfilment in shops, just get out and walk. A leap of faith! 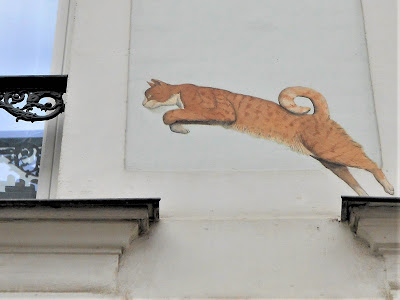 Email ThisBlogThis!Share to TwitterShare to FacebookShare to Pinterest
Labels: Doorways