A Solitary Satyr in the Streets of Reims - Les Bacchantes d'Euripide... 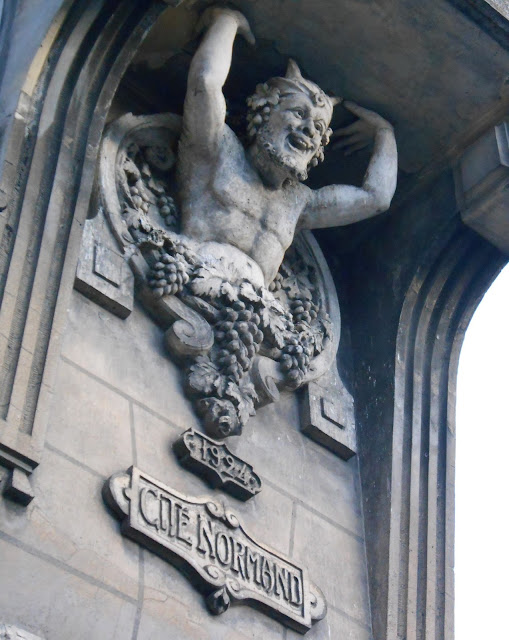 I caught sight of this figure from the corner of my eye during my driving lesson but I didn’t dare lift my gaze from the road ahead and thought it was the sculpture of the devil, bursting out from the façade ! That probably says a great deal about my state of mind when behind the wheel, as I still go into freaky panic mode at unpredictable moments. As the road in question is just perpendicular to my street, I tracked down the building to have a better look. Although the character is less diabolical than initially thought, the statue itself seemed to be quite mysterious. This jovial-looking character is set on the angular façade of this post-First-World War building. Like Atlas, it appears to prop up the balcony, yet does so with ease and merriment, surrounded by the vine leaves and grapes. The latter are an obvious allusion to some form of bacchanalia – the ancient Roman festivals that were characterized by boisterous, drunken revelry, and also to the status of Reims itself, at the heart of the champagne region. Why this particular figure had been chosen to decorate modest early-20th century architecture was not apparent. However, as it turned out, the name of the street, Rue Geruzez, was an indicator for the choice of theme. 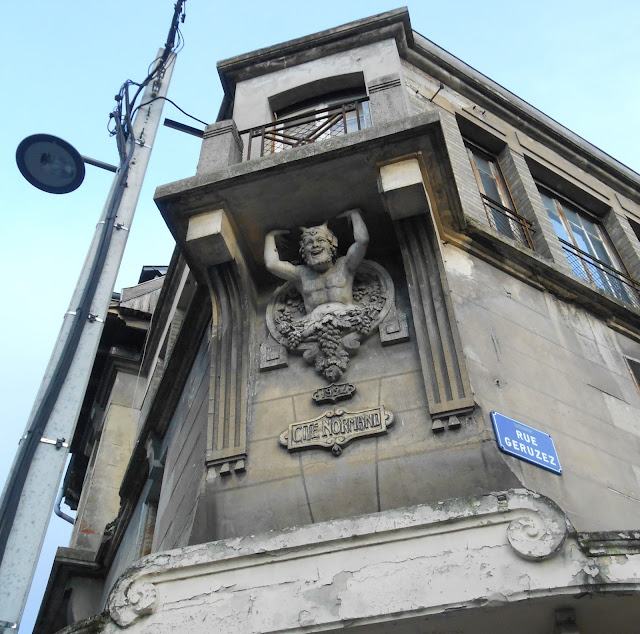 The building is one of a great many that were erected during the Reconstruction de Reims in the aftermath of the Great War. In this case, the date is clearly indicated as 1924. At this period of rebirth many ambitious social housing schemes - les cités-jardins - were realised. These were destined to accommodate the citizens who had fled Reims during the war years and had found themselves homeless on their return. Many of these quarters still exist today, and their bands of garden and park-squares offer welcome greenery in an ever-expanding urban landscape. Furthermore, there was a certain recherche in the aesthetic design and decoration of this post-war architecture ; much of the work was carried out by men ‘de l’art’. Thus Reims has numerous Art Deco buildings and an ecclectic selection of façade work that means that it really is worth your while to look up as you stroll around the city now, just as much as when these were first unveiled. Unfortunately, such extensive programmes came at a cost. By 1926, the budget could no longer support such demand and construction came to an abrupt end. The inscription Cité Normand, on the façade here, refers to one of the several quarters built for the workers employed in the local factories around the canal area. At first, I wondered if ‘Normand’ referred to the style of architecture that figures on the seaside resorts in Normandy, for example, but in fact, it simply comes from the name of the entrepreneur. Much of the original architecture in this part of town has been lost or altered greatly. The two streets of which this façade forms the corner are a joyless affair. There are non-descript rows of houses that may or may not have been attractive once upon a time, before being stripped of their original features. Then there are the series of blocks of flats, not unlike the one that I live in, that continue to sprout up out of the concrete. Therefore this building, with its last fine Art Deco details, really is a little treasure, set in a 21st century sprawl. 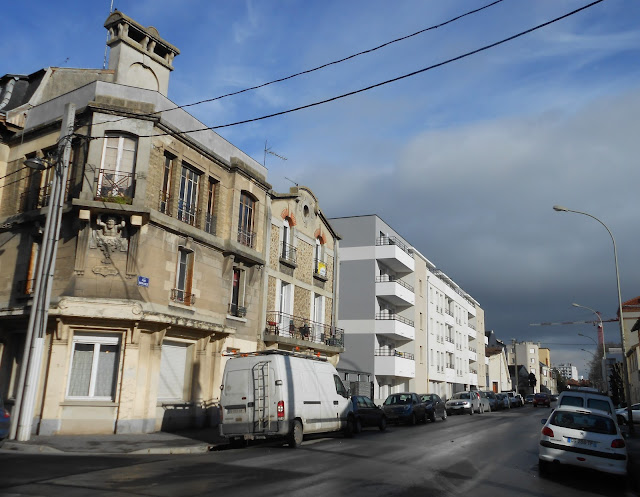 As many of the streets in Reims, this one bears the name of a once well-known writer. In this case, it commemorates the literary professor, Nicolas Eugène Geruzez (1799-1865), born and bred in Reims itself. The satyr we see on the street corner is a reference to one of his works, Les Bacchantes d’Euripide (1832), which offered an analysis of the ancient Greek tragedy of the Athenian playwright. The central figure of the play was Dionysus, god of Greek mythology, also known as Bacchus. Today, we generally think of this figure as a portly, jovial type, draped in animal skins and ivy, ever content to slug back his wine, like a rather inebriated version of Father Christmas. In the same way, his attendants, like this half-man, half-beast, generally look quite amenable too – this one certainly does, with his broad smile. However, the origins of this god are somewhat darker, linking him to the wild, the weird and the wanton. The worship of Dionysus involved rituals that were performed by the ecstatic, intoxicated revelers of the thiasus – his retinue. This was largely composed of bearded satyrs, such as this one, and female attendants, known as the bacchantes or maenads – literally meaning the ‘raving ones’. These would all participate in the Bacchic festivals during which wine would flow freely. The creativity, free expression, mystic revelation, enthusiasm and enjoyment that such limitless imbibing favourised soon veered to something far shadier. Unfettered follies led onto madness, instinctive drives brought brutal acts and excited singing and dancing would slide into frenzied chanting and transe-like states. Far from being gently-flowing female figures praying in marble temples, the bacchantes were bloodthirsty hunters, running wild in the woods, ready to slaughter their prey and devore their quarry raw. 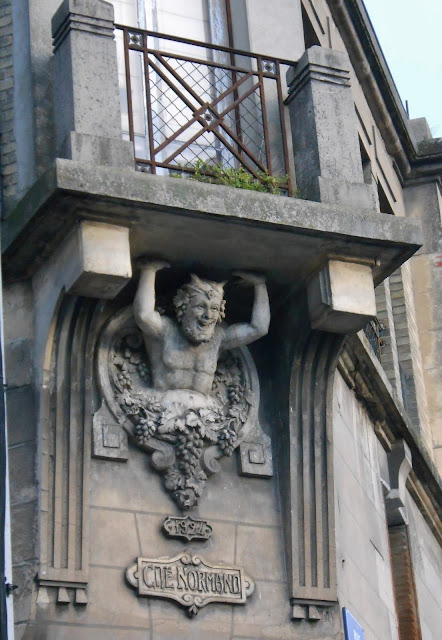 Les Bacchantes d’Euripide demonstrates the duality of human nature as we observe the two facets of Dionysus. Within the play, the cultivated, mystical ‘human’ attributes of the protagonist cohabit with the raging, feral, ‘animal’ aspects. Dionysus is described by the chorus as god of festivity and creativity, yet he appears as a character on stage, driven by ‘mortal’ weaknesses, of anger and desire for revenge. Indeed, he represents duplexity and polarity on many levels. If the free, creative, spiritual qualities of the individual are fully repressed, this will thwart his growth. However, should the untamed, limitless and licentious be given free rein, this will lead to debasement and debauchery. The play of opposites needs to be balanced ; one cannot outweigh the other for extremes will always bring havoc. Throughout the play, we see the intertwining of what is godly and/or human; beastly and/or divine; masculine/feminine; virile/impotent; real/irrational; authoritarian/anarchic; blind/clear-sighted. 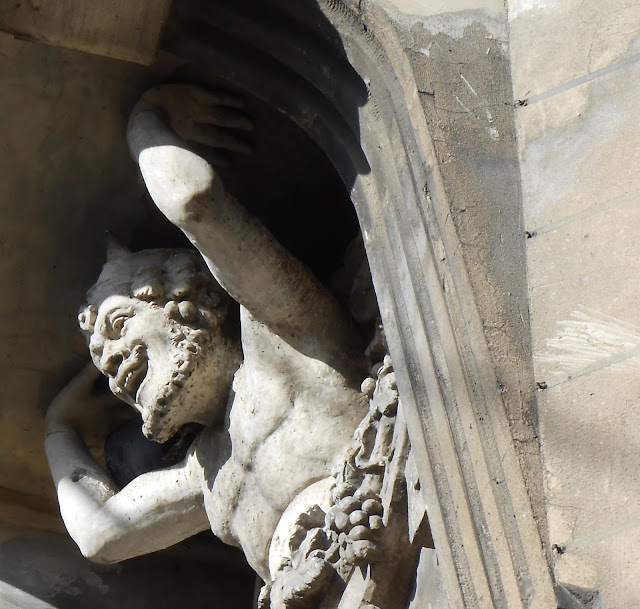 Dionysus has come to wreak vengeance upon family relatives, in the place of his birth, Thebes. King Pentheus of Thebes and Agave, Pentheus’ mother, will be made to pay for their slanderous remarks about his line of descent. They deny his divinitiy and yet his blood line links him to Zeus, king of the gods, and a mortal mother – Semele – the sister of Agave. Dionysus survived the rage and wrath of Hera, Zeus’ wife, who wished to eliminate this living proof of her husband’s infidelities. Having being ripped to shreds by the Titans, at Hera’s request, Dionysus was brought back to life, and was born forth from Zeus’ thigh. He was then raised by mountain nymphs and centaurs, which helped him forge a bond with the magical and mystical and to follow the natural cycles of life and death. Dionysus was indeed one of the few gods who was able to bring back the dead from Hades, the Underworld and moreover, creation and rebirth are symbolized by his symbol; the vine plant.
The unwielding refusal of Pentheus to accept Bacchic festivals in Thebes, and thus his blunt rejection of Dionysus as a god leads the revengeful deity to take action. Like a strange Pied Piper, a disguised Dionysus lures the womenfolk into Mount Cithaeron to devote themselves to a cult in his honour. Similarly, the king’s dogged adherence to masculine politics in order to crush this flouting of his authority represents the suppression of his own femininity and leads to his own destruction at the hands of the ultimate female figure; his very mother. The voyeuristic desire to watch the activities of the Bacchantes, including Agave herself, render Pentheus blind to his own reality and unable to see ahead. His retentive nature has given rise to impulses that drive him towards irrational, insane behaviour. Had Pentheus been more flexible, less extreme in his stance, he would surely have survived, but through dramatic guise and performance, Dionysus plans to teach him a lesson. Here indeed is the art of Dionysus being played out to the full, as he toys with the fate of Pentheus, staging the king's death as a ritual sacrifice of the Bacchantes. As we follow Euripides’ tragic play, we too are taught a lesson through watching this god of the theatre as he acts out his life role. To quote this playwright from another of his tragedies, Medea, “Not too little, not too much: there safety lies.” In response to Pentheus' refusal to lessen his tight grip over the status quo, Dionysus meted out the most extreme of punishments; death by the person who had initially given life; Agave. Yet surely Dionysus' cruelty is another proof of the dangers of the extreme? Cadmus - the father of Agave and Semele - remarks to him "We have learned. But your sentence is too harsh". The sentence does not just concern the 'punished', but the 'punisher' too. Slaughter affects the prey and the hunter. It is not clear if Dionysus himself has learnt to read the full significance of his behaviour. It is left to Cadmus to conclude that "Angry gods should not act just like humans." Dionysus seems to have employed the full extremes of the polar opposites within him - he has indeed used his ultimate god-head to wreak havoc in order to satify his mortal emotions. 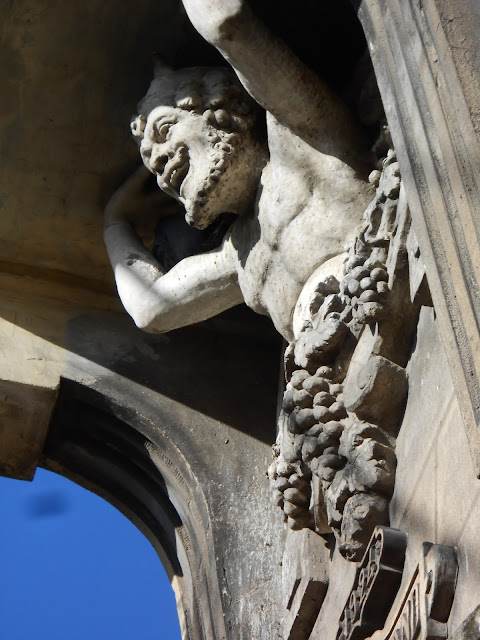 Perhaps the most incredible aspect of Greek mythology is how relevant its observations on human nature still are today. How little Man has changed over the centuries. I just can’t work out if that is tragic or comic! 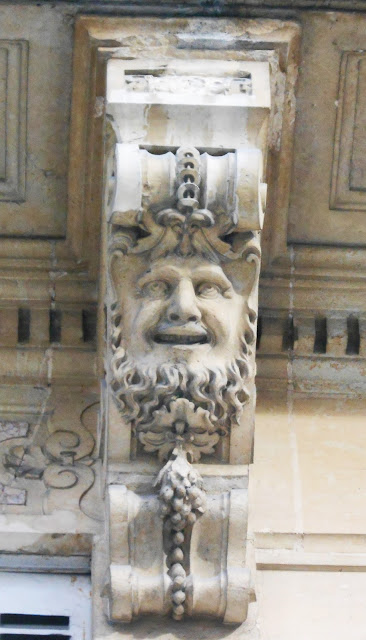