St Peter's Cathedral at Beauvais - The Struggle of Architecture over Gravity... 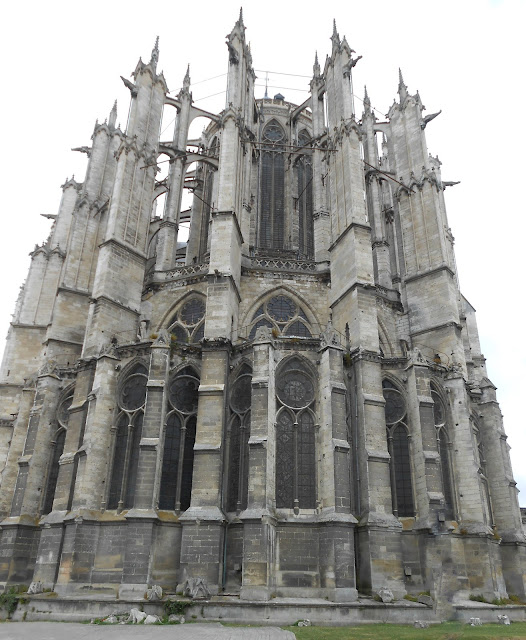 After visiting some of the great early cathedrals – St Denis, Noyon, Laon – I was eager to see what makes the incredible edifice at Beauvais so unique. Well, remarkable it certainly is. 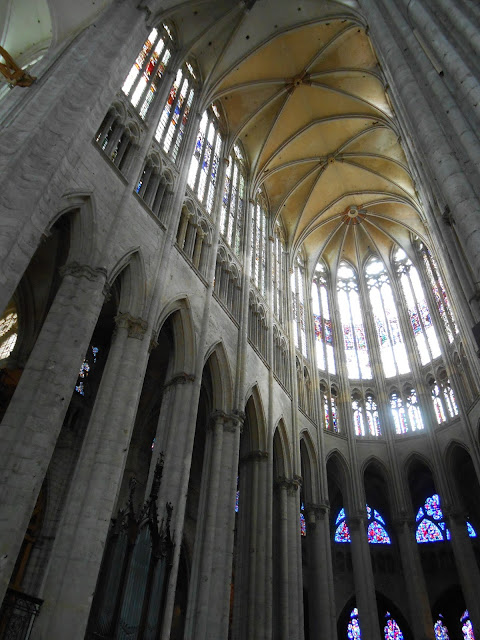 The vaulted interior of the choir of the cathedral of St Peter of Beauvais, soaring up some 48.50metres means that it is the highest in the world. This was in no way incidental or accidental, but was part of an aim to leave a mark by constructing a spire «so tall, that once finished, those who see it will think that we were insane». Until the collapse of a vertiginous central tower of 153metres in 1573, this cathedral had been the tallest human construction anywhere, even overshadowing St Peter’s in Rome. 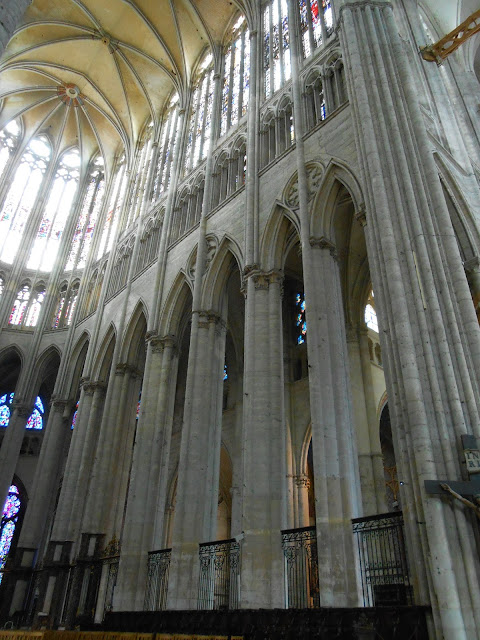 The price to pay for such an act of hubris would be high and the sum due has still not been fully paid off. Beauvais cathedral is proof that pride does indeed come before a fall This crazy desire to build a divine edifice on a foundation of almost sinful worldly ambition has affected every single aspect of its architecture and fate to this very day. 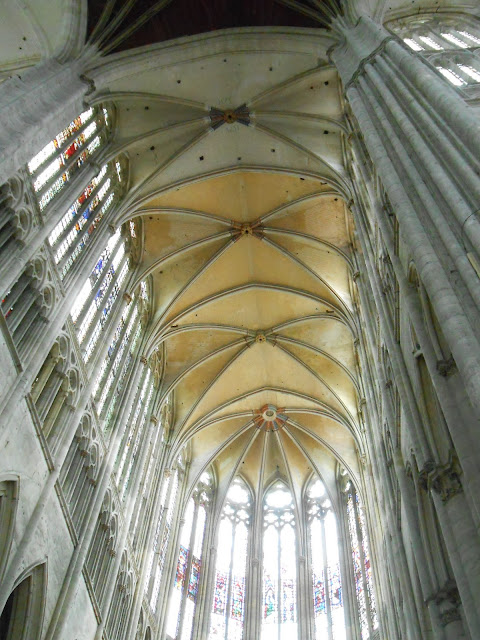 When approaching the cathedral today, you are obviously struck by its sheer size. The elaborate chevet on the eastern side of the edifice, housing the apse, choir and radiating chapels, has an imposing structure that looks like some weird sci-fi Gothic rocket launcher, if such a thing could exist! 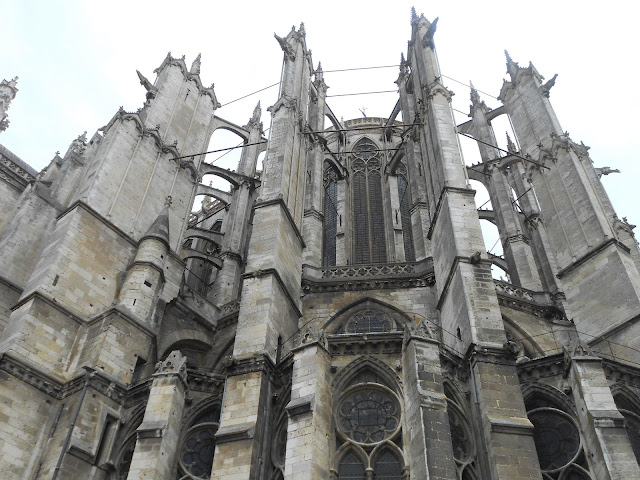 Your eyes are drawn to the metal rods that criss-cross and span the buttresses , which themselves resemble strange blades of stone. The whole seems to release a strange tension, as these vertical spears rise into the skies straight above, yet seem to curl inward slightly towards the summit. 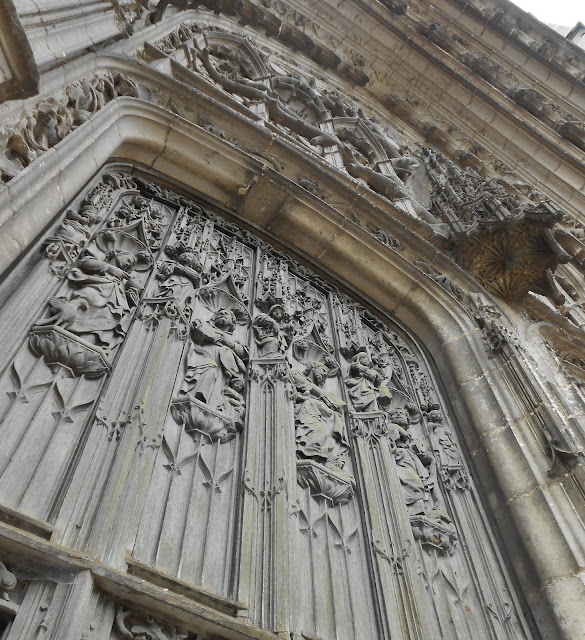 Walking on around the perimeter of the cathedral, the striking Gothic and Renaissance features catch your attention, with the beautiful carved wooden doors on the northern side and with the magnificent sculpture of main entrance on the southern facade. 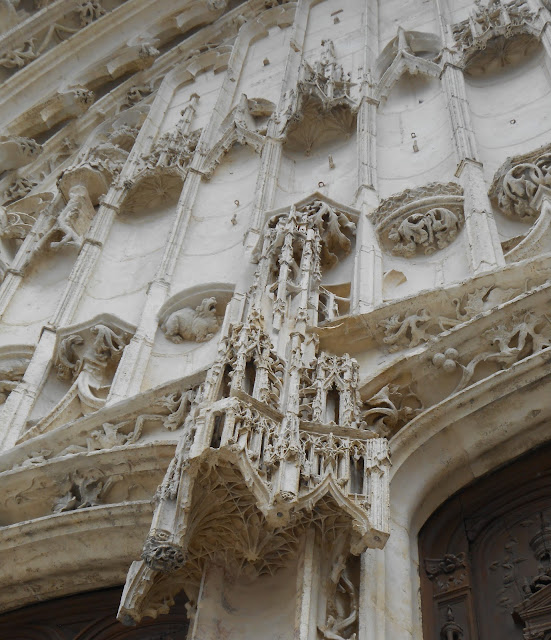 It seems odd to see a 10th century Romanesque church attached to the western flank of the cathedral itself, but it is the architectural structure just beyond this, trussed up by vast wooden joists and partly covered in slate that gives the distinct impression that something is somehow amiss. You can say that again… 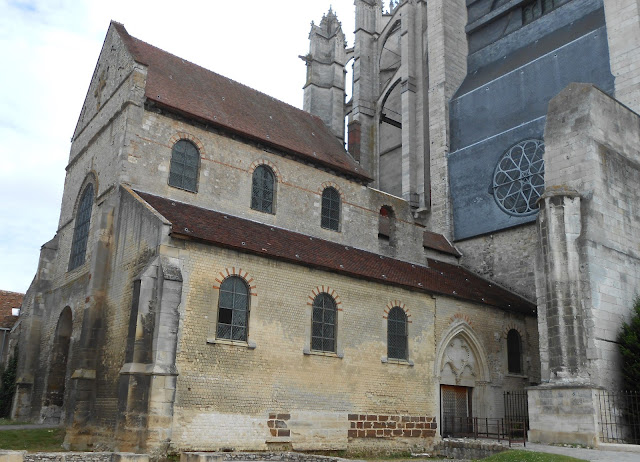 If we are still able to see the old Romanesque edifice today -the Notre-Dame de la Basse Œuvre - this is due to the fact that the Gothic cathedral of the Haute Œuvre was never fully completed. The nave of the later work was destined to occupy the site of this early edifice, but lack of sufficient funds meant that the cathedral of Saint Peter is lacking this significant element. 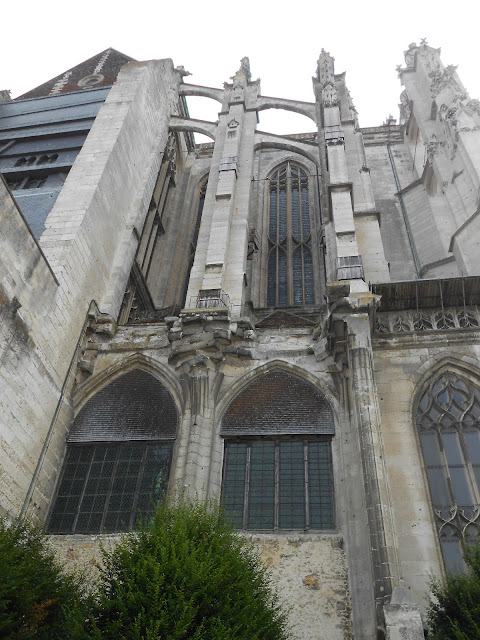 Without a nave, the building is strangely truncated, but the impact of this architectural omission does not just concern spatial aesthetics. Furthermore, the problems that stemmed from this missing link have never been fully resolved. This is an ongoing story and whilst your eye might get distracted from the bigger picture when admiring the architectural details on the exterior facades , a glimpse inside the cathedral soon sets the record straight… 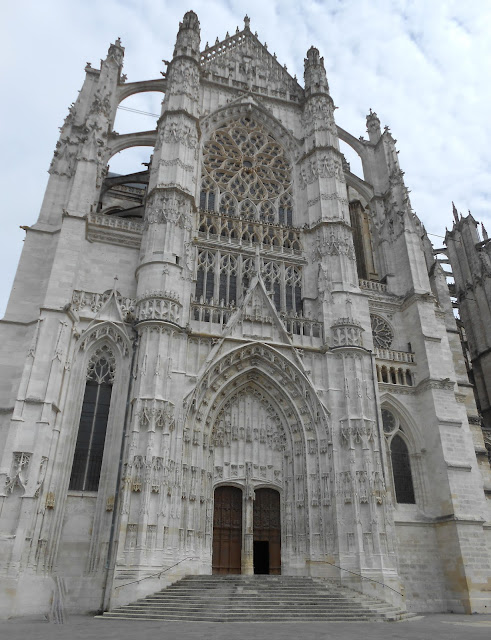 When the Romanesque Basse-Œuvre church was virtually destroyed by fire in 1225, the decision was taken to replace this Carolingian architecture by an ambitious Gothic edifice that would surpass the others of Northern France. In this way, the cathedral would be an appropriate reflection of the prosperity and importance of Beauvais that had grown with flourishing trade and a prestigious diocese that had significant religious and political power. 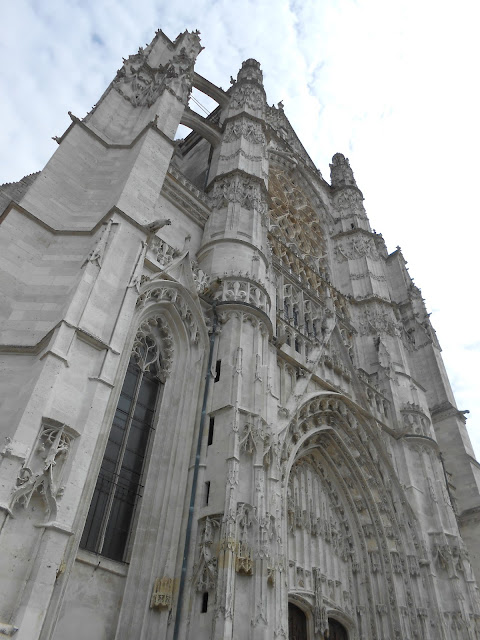 Situated on a crossroads of commercial routes, this ‘ville drapante’ benefitted from the considerable revenue generated by its textile industry. Work commenced on this new edifice, Saint Peter, using the technological experience that had been gleaned from the building of the first generation of Gothic cathedrals. Construction of the building relied on massive blocks of local chalk stone. These were set onto foundations that went down more than 10 metres in order to rest on the solid rock formation below. 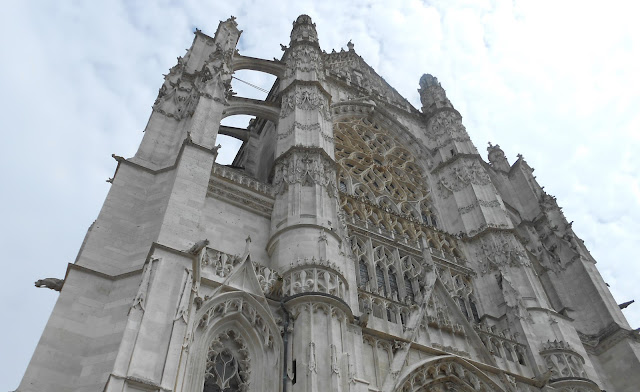 Not only was the Beauvais choir to be far taller than those of its great predecessors, the battresses were to be thinner too, enabling maximum luminosity from the dazzling heights above. This initial construction period was realised relatively smoothly and from 1260 services started to be held in the completed choir area. 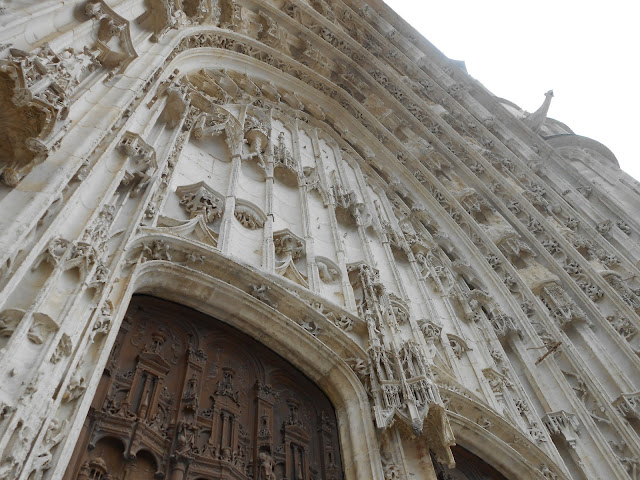 During some 12 years, from the end of work in 1272 until one fateful day in 1284, the Beauvais edifice must have been the glory of the town. Due to its great height, the cathedral rose above the plateau of the surrounding landscape, leaving it exposed to the high winds that would be funnelled towards its massive form and through its structure. 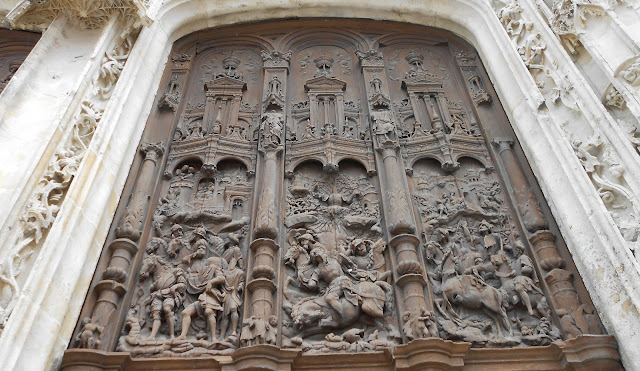 A November storm over 700 years ago saw the collapse of the choir. The fine buttresses buckled under the pressure exerted by the gusts of wind, in turn causing the vaulted ceiling to crash down onto the bays below, shattering the stained-glass windows in the process. Serious structural conclusions were drawn and the whole was rebuilt, to the same dizzy height but this time with walls that were thickened, pillars that were doubled and the inclusion of far more columns and vaulted partitions in the choir and chevet.

Restoration was finally completed around 1347, but the plague and the One Hundred Years War interrupted any further undertakings. It was only in 1500 that work was started on a transept to complete the edifice, some 150 years after the edification of the choir that had proved to be so troublesome. 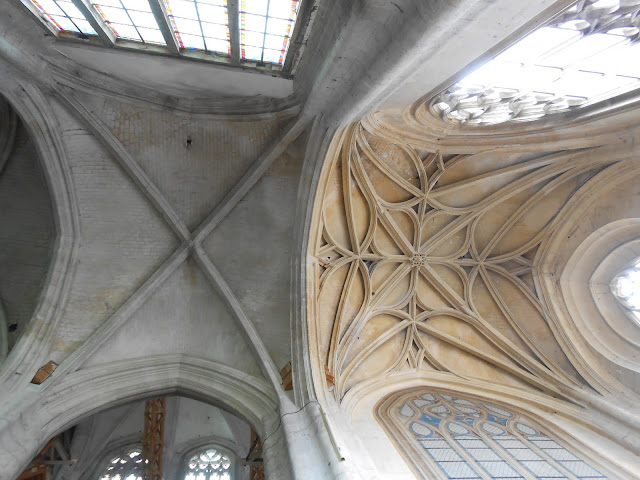 Unfortunately, not all the lessons had been learnt in all those intervening years. The cathedral would continue to be blighted by the same weaknesses in its architectural structure which stemmed from the same old flaws in human nature; blind ambition arising from vanity and pride. 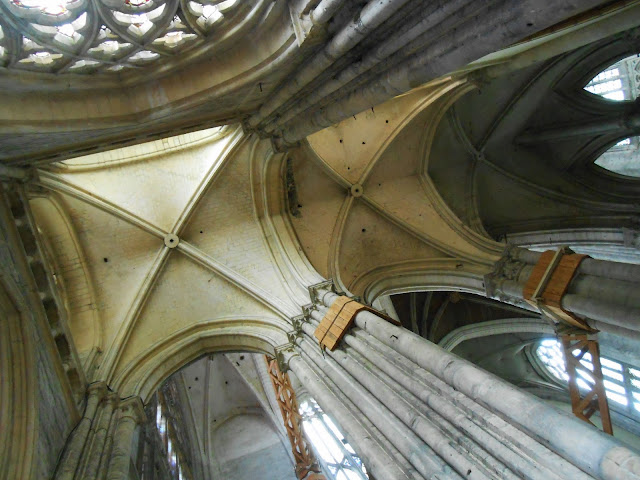 When it was decided that a lantern tower in the Flamboyant style would crown the transept crossing, it went without saying that this would indeed tower over any other similar structure in Christendom. Over 50 years, the spire rose up to reach its final height of 150 metres in 1569. 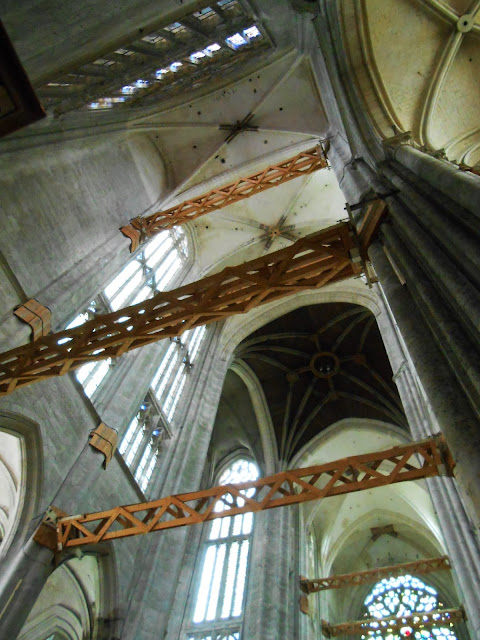 Carrying out this architectural feat demanded great skill and considerable sums of money, so much so that the nave was never actually constructed, for the lack of means. In this way, the weight and force of the spire were not offset by this essential supporting structure which would have stabilized the whole. 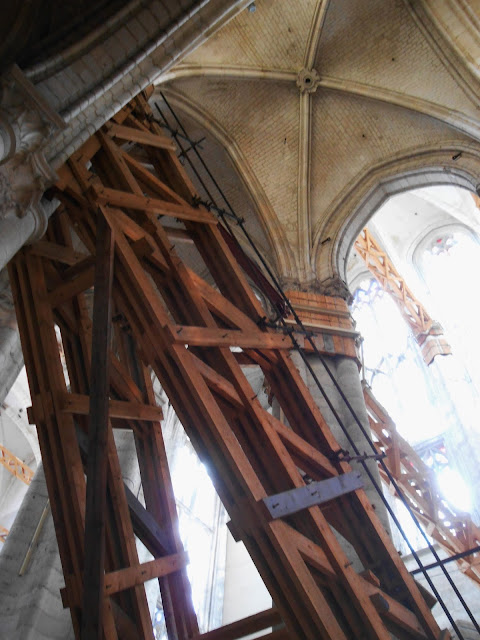 The fragility of the cathedral spire was soon apparent and in 1572 the iron cross that had been mounted on the top of the lantern tower was removed as it was considered to be too heavy. Despite this precaution, nothing could protect the cathedral from the elements. Yet again, the cathedral of Beauvais fell prey to the resonating winds. During Mass on Ascension Day, the whole spire collapsed just four years after completion, bringing down with it the tower, surrounding vaults and parts of the transept. 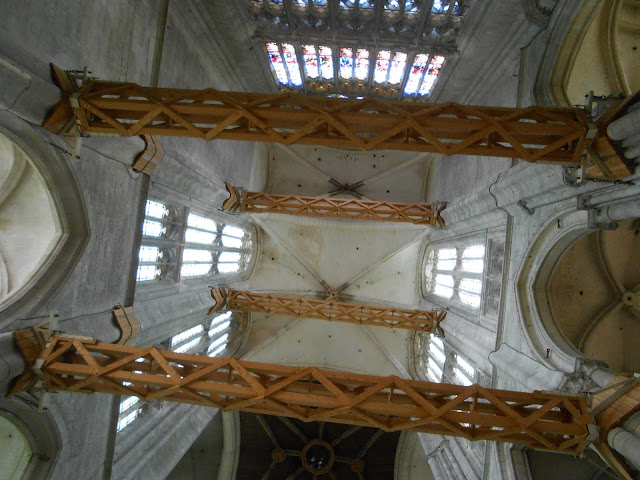 Reconstruction work followed over the next thirty years, but this time there was no spire; the money had run out. A simple wooden vault was put in the place of the tower. The nave itself was never completed and this western facade was later covered by the slates that we see today. 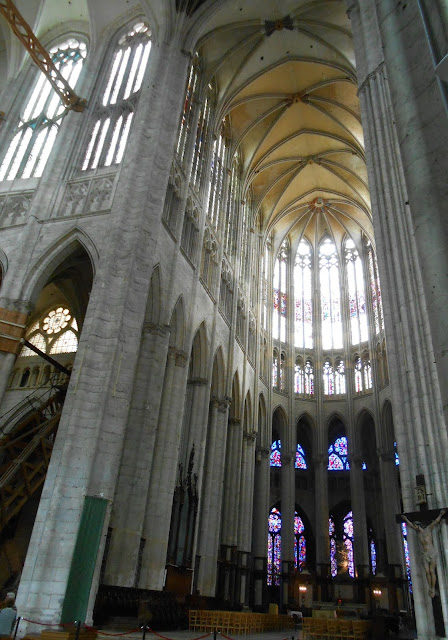 It was the southern facade that housed the main entrance to the cathedral for dignitaries and great processions. Despite the ravages of the Revolutionary years from 1789, this is still very beautiful today. Sadly the statues from the niches of the facade were destroyed and the furniture and artifacts within the cathedral were likewise removed. 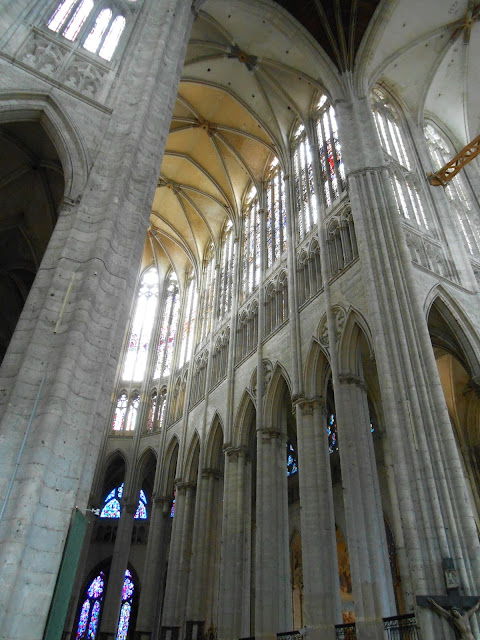 Sans-culottes pillaged the building and for some time St Peter became a temple dedicated to Reason. The sculpted fleur-de-lys, symbol of the French monarchy, was effaced by the revolutionaries but several of the royal salamanders, with their tails coiled into a figure-of-eight, still hide on the facades, as emblems of François I. 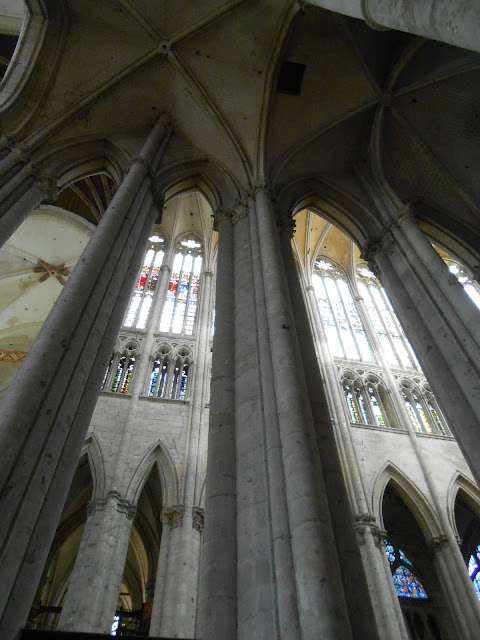 Other parts of the cathedral facades seem to have escaped all damage during the Revolution. On the northern side, there is the richly-sculpted Tree of Life tympanum and just below are the wooden doors of the portal, built in 1530. 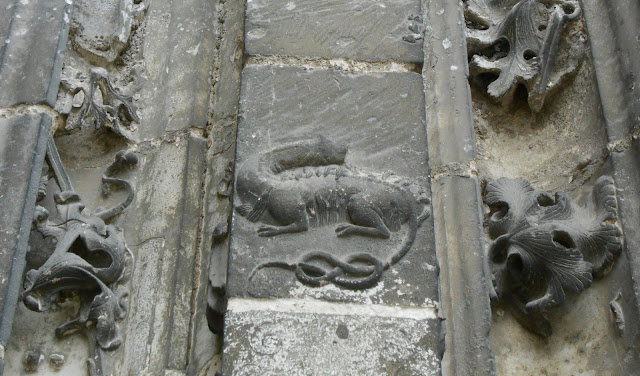 Whilst the style and mood of these are Gothic, the shells that feature below the saints hint to the influence of the Renaissance. Eugène Viollet-le-Duc greatly admired the cathedral for its beauty – especially that of its choir, calling it «The Parthenon of French Gothic». Later in the 19th century, an impressive astronomical clock was introduced, and insured a further influx of visitors. 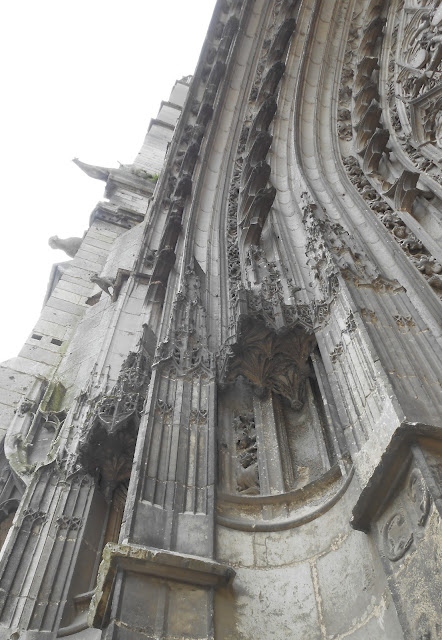 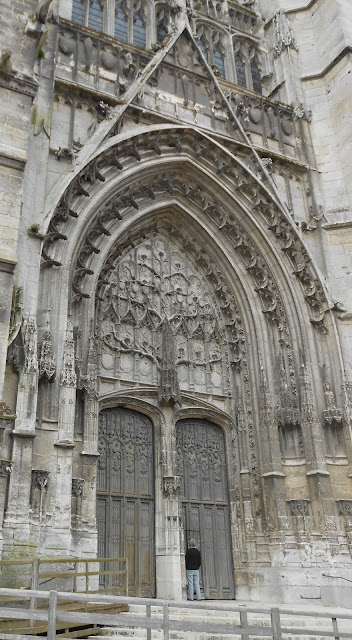 Over the centuries, the risk of collapse has been overlooked, just as it was throughout its construction years. Periodically, the metal supports between the structural features of the cathedral were removed, deemed inaesthetic and unnecessary, but were quickly reinstated, for obvious reasons! 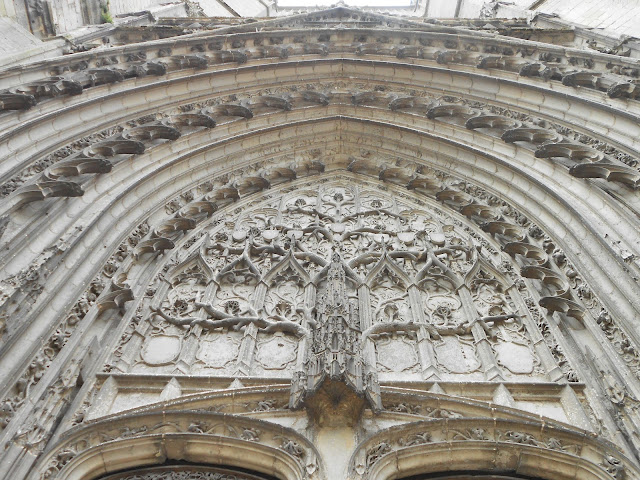 More recently, other structural problems have appeared and solutions duly found, but the presence of huge wood and steel trusses inside the cathedral leave you in no doubt to the gravity of the situation. Without these, the transept would surely have caved in during the 1990s and strange floor braces rise out at 45°, to provide further support, should need be. 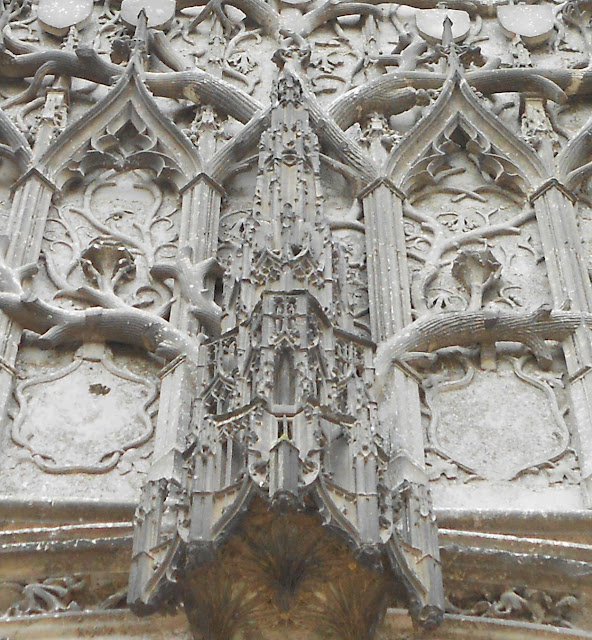 Like the majority of old edifices today, the whole cathedral does look a little run-down, with leaking drains allowing water to stain the stonework and plants to grow from cracks and crevices. 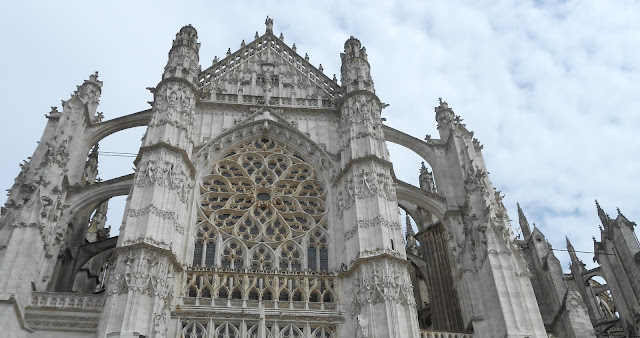 I wish more money could be poured into the upkeep of these fantastic marks of civilisation, even those who have siphoned off so many funds during their lives. The cathedral of Saint Peter must be the ultimate example of a high-maintenance existence! 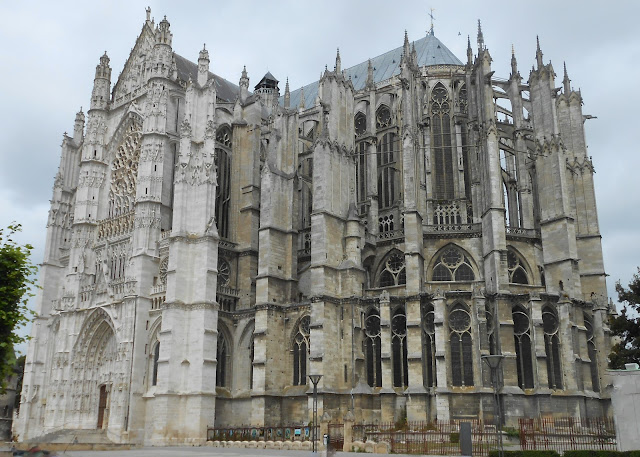 Email ThisBlogThis!Share to TwitterShare to FacebookShare to Pinterest
Labels: Cathedrals