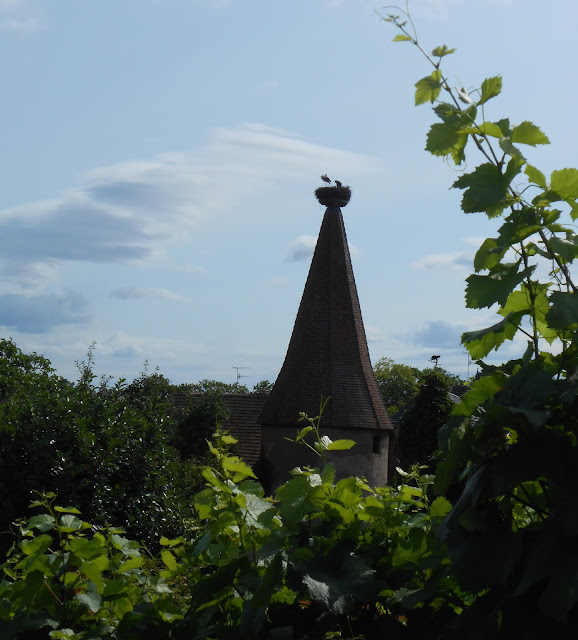 A while ago, I had the chance to visit the Stork Conservation Centre of NaturOparc at Hunawihr, in the Alsace region. Prior to this trip, I had already come across these incredible birds in various locations, but as their typical roosting spots are generally well above eye-level, I had never been able to get up-close-and-personal, so to speak. 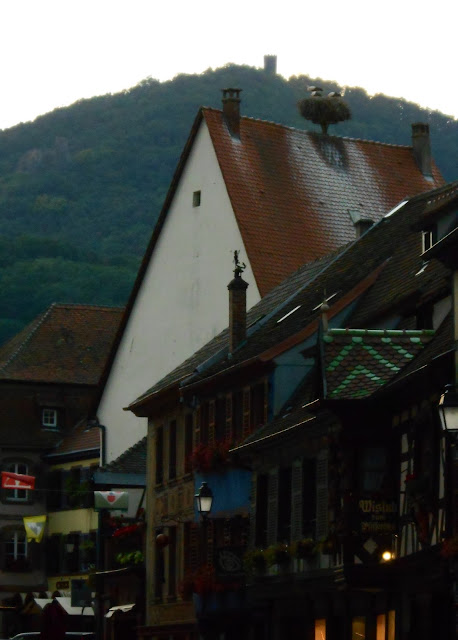 At the centre, adults, fledgings and young chicks are visible, as are a range of other natural inhabitants of water courses and marsh land - otters, coypus and the endangered golden hamster of Alsace, no less. The centre actively works on programmes of reproduction and reintroduction of the various species, and in so doing educates and entertains the general public. 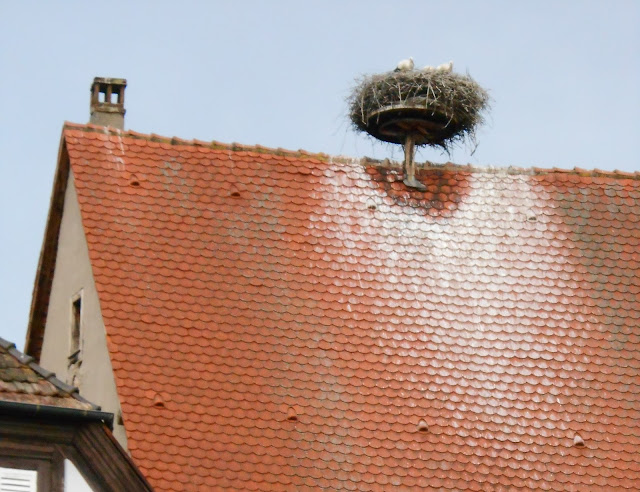 My first sighting of wild storks was around an old palace in Marrakech, Morocco. This was a wonderful image – the terracotta-red of the ancient buildings, streaked white from droppings from the vast stick-and-frond nests perched precariously along walls and rooftops. And then, of course, the storks themselves, like creatures from another age, their huge wing span, the gangly yet strangely elegant legs and that curious clacking noise as they clatter their impressive bills as a means of communication. 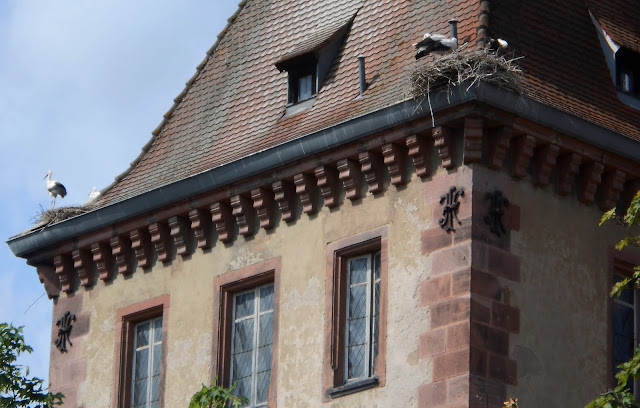 Then, closer to home, I saw the storks that inhabit the north-east area of France. Although I had been aware that storks took up residence in the towns and villages, I hadn’t realized to what extent. I was so excited to notice the first specimen, looking down from one the chocolate-box-pretty buildings that are so typical of Alsace, that I didn’t notice that there were many others, peering down or just indifferent to us humans far below. It really was a Hitchcock kind of moment -  we were encircled by large birds from way above! 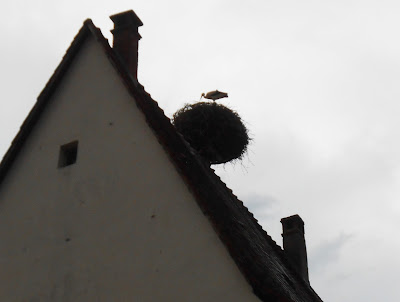 When I last returned to this part of France, I was rather more prepared for the sight, yet not to the point of becoming blasé. The sheer size of these birds strikes you during their bold flight, legs and neck outstretched, or as they preen and pose, perched on their dramatic nests, silhouetted against the sky line. These storks are as much part of the fabric of landscape in Alsace, as they are key to the folklore of the region. It is said that the Alsatians revere the cigogne as much as the Egyptians did the ibis, however this has not necessarily always been the case over the last decades; hence the need for conservation centres to build up declining stork populations. Indeed, changing agricultural practices, the wide-spread use of herbicides and pesticides, electrocution from criss-crossing powerlines and the canalisation of the Rhine has meant that stork numbers diminished considerably from the Second World War. Efficient land management and industrialisation resulted in the loss of traditional habitats as marshy terrain was drained, grassy meadows converted to new crop use, or was overrun by taller vegetation incompatible with stork foraging patterns. Pollution rendered land toxic to these birds and also harboured other hazards. The final outcome served as a wake-up call, not just to the people of Alsace, but also to those of the Netherlands, Belgium, Poland, Switzerland and Sweden who were at risk of losing their emblematic bird. 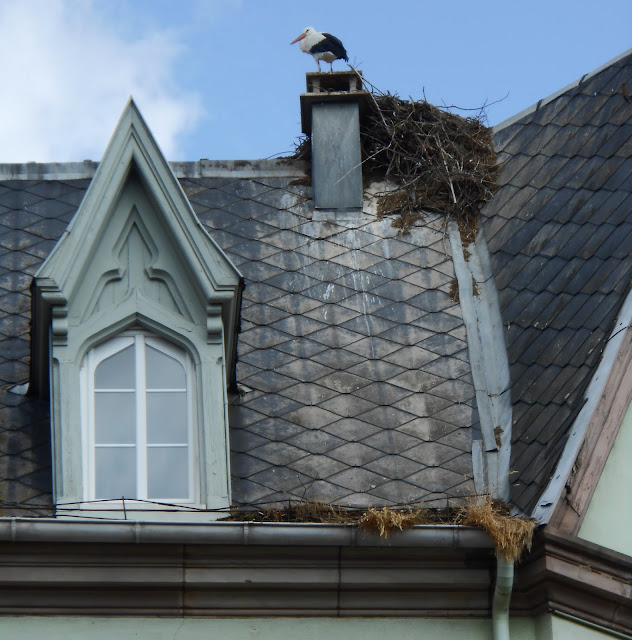 Acting as symbol of fidelity, fertility and good fortune, this migratory creature is integral to cultural heritage around Europe and Africa. Commonly associated with life, rebirth and regeneration, the popular image of the stork is that of Nature's purveyor of bundled offspring. Birthmarks on the head of a newborn were referred to as the stork ‘bites’, the sign of a novice carrier bird! 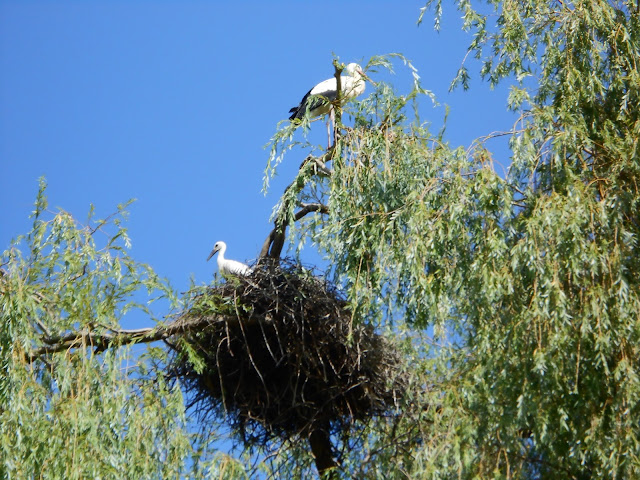 Committed to the family, it was said that no self-respecting stork would nest on a house marked by marital breakdown. In the north-east of France, the image of the stork was tied to the very land itself, following the annexation of Alsace-Lorraine by the Germans, after the French defeat in the Franco-Prussian war of 1871. 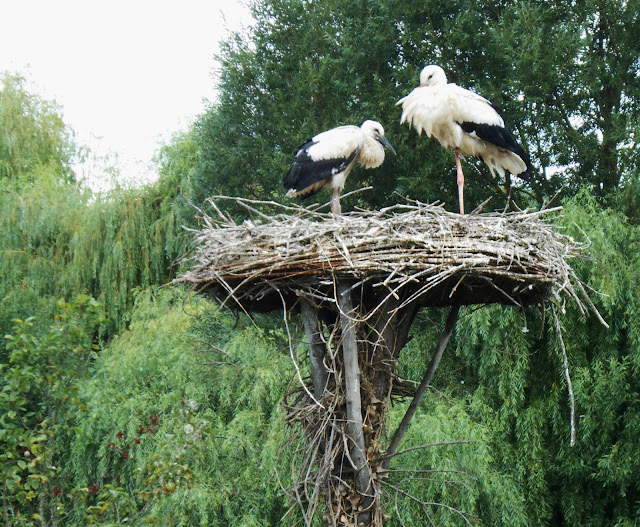 Known by its Latin form in the majority of the Romance languages (eg cigogne in French), the English word 'stork' finds its origins in old German. Although renowned as a creature of habit and instinct, the stork has proved itself able to adapt to circumstances, reinventing itself with surprisingly modern means. For centuries, it has always lived in relatively close proximity to Man, largely protected from the latter’s hunting instinct by its reputation as a beast of good omen. 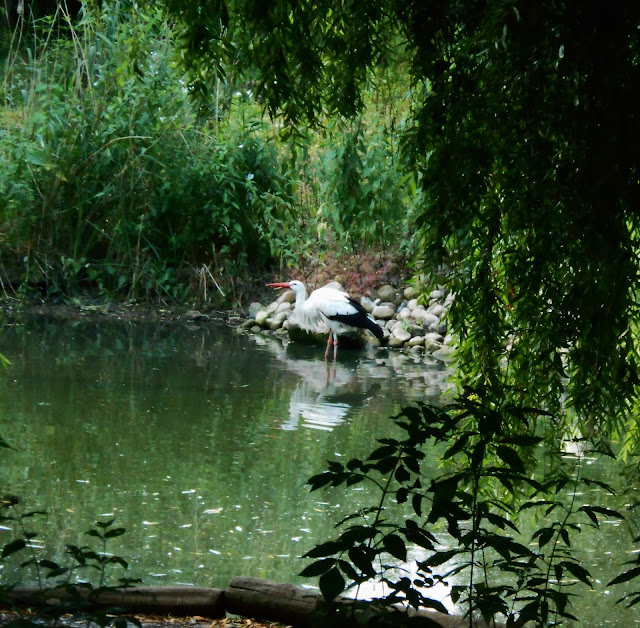 Spired churches and chimneys have always been nesting grounds of predilection for storks, often improved by special structures, such as old cartwheels, to help the building withstand the added load of such weighty nests and to help the bird gain stability. Despite this benevolent human intervention, the stork has chosen to lead its own independent, slightly aloof existence in these shared spaces. 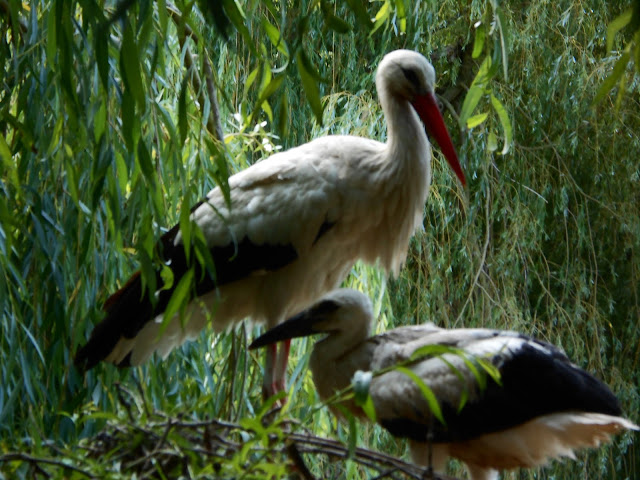 However, over the last decades, the stork, rather like the cool, crafty urban fox, has become more dependant on Man’s activities for its own mode of existence, thus changing ingrained patterns of behaviour that had, until quite recently, formed the basis of its life. 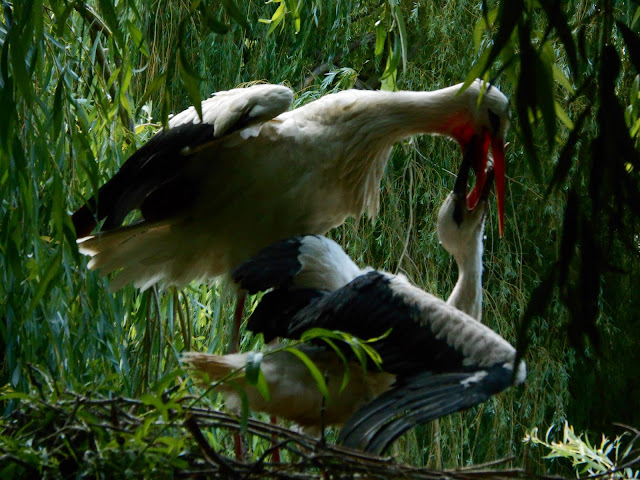 With its powerful wings, tipped with black-fingered feathers, its distinctive flapping and soaring movement when in flight, the stork is perfectly equipped to carry out the migratory marathon from Europe to Africa, for which it is renowned. Leaving the northern territories as the temperatures drop, the stork sets off on a southward journey to wintering locations in the warmer climates, following inherited routes, migration corridors and stopover sites. It uses air thermals to soar and glide, thus economizing wing movement and hence body fat reserves for energy. In fact, the stork avoids crossing over the Mediterranean itself, since the required currents do not form over water... Since the 1980s, however, this migratory movement has been modified, and the stork now appears able to avoid such forms of long-haul travel. 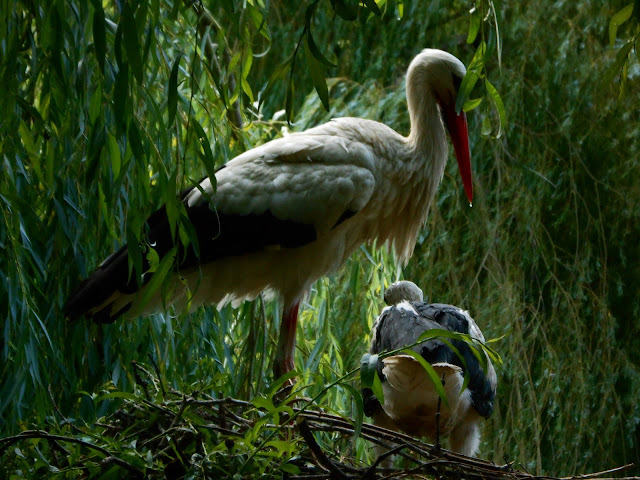 During the programmes to breed storks in captivity in order to boost populations, migratation was suppressed. However, the gradual alteration or complete suppression of migratory movement witnessed over recent years has more diverse causes. The loss or impoverishment of traditional habitat and food sources due to agriculture and/or urbanisation has led the stork to seek other areas in which to forage. 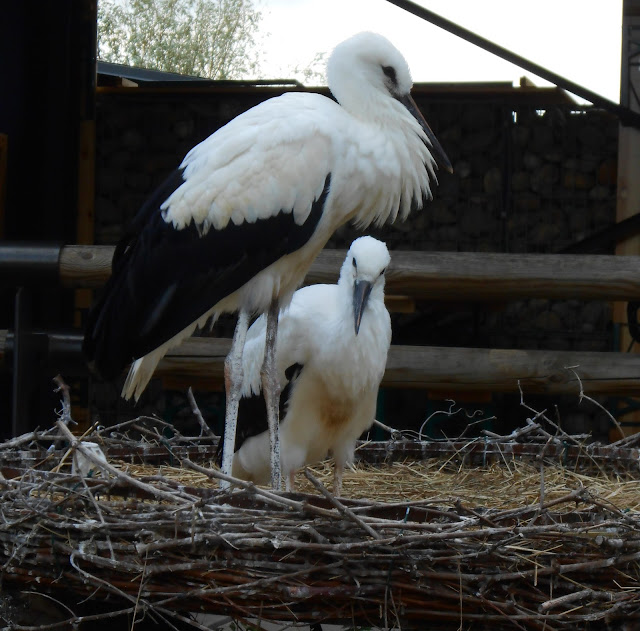 By nature a carnivorous bird, the stork consumes a range of small creatures living around wet zones ;  fish, amphibians, reptiles, insects, birds and mammals. Whilst areas offering such prey are diminishing, vast expanding landfill sites are proposing a wider menu to our feathered friends. Indeed, the stork appears to have developed a taste for junk food that stems from our own and mirrors our appetite in an uncanny manner. 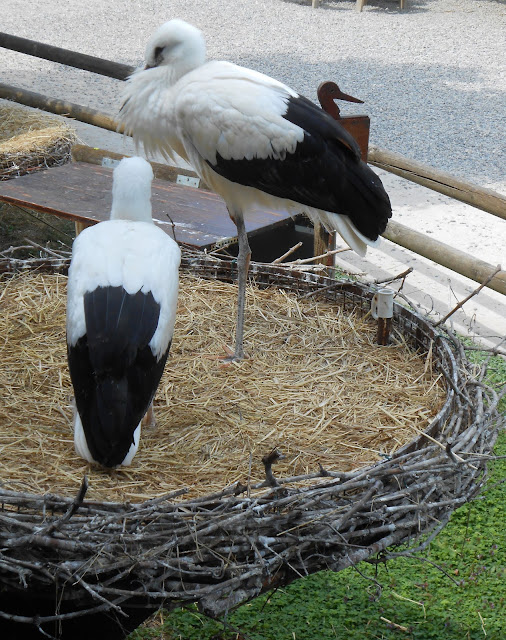 Just as many sun-deprived Brits opt for the sunny climes of Spain and Portugal to overwinter, growing numbers of storks are following suit, and are therefore ditching Africa in favour of closer destinations. These indeed offer a reliable fast-food supply and could even become permanent places of residence to the savvier stork. It should be supposed that there will be a price to pay for this low-cost lifestyle choice ; health issues will surely arise, perhaps even an avian form of obesity. Whilst mortality rates from the arduous trek to the African continent will be less dramatic, over-population and the trickle-down impact on many levels of the eco-system is likely to bring other consequences. The imminent closure of landfills, as requested by EU directives, will suddenly mean that binge-eating storks will be left with nowhere to go. In addition, they will have limited means to fly off to new horizons as their flight ability may well have been weakened by their unhealthy living model. As a gregarious creature, living in colonies, large numbers of storks will have to be relocated, away from these garbage communities. 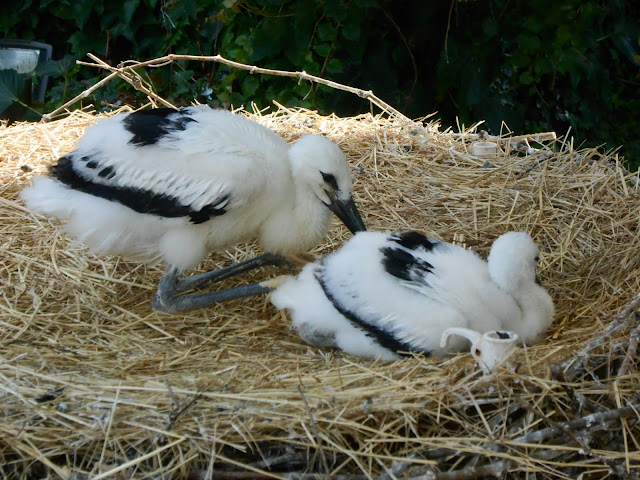 When seeing the cigognes of Hunawihr, I was blissfully unaware of this particular set of man-made problems that has stuck itself onto this animal species. You can only be thankful that such conservation programmes exist today. So, the visitor gets to see the birds going about their business, as they always have, yet from a better vantage point. In this way, you can observe the adults feeding their young by the typical regurgitation process (think ‘fishy Exorcist’), roosting birds preening themselves and grooming fellow nest-dwellers (‘allopreening’), birds communicating by bill clattering and head nodding. 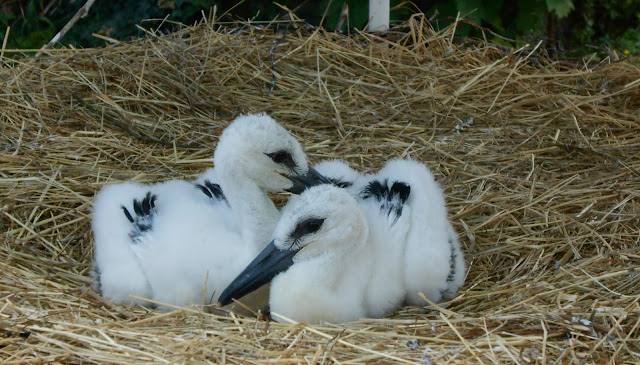 The family unit is fairly close. The breeding adults are monagamous, but do not not necessarily stay paired for life; whilst together they share the parenting tasks. Both adults make the nest, incubate the typical clutch of four eggs for around a month, feed the young hatchlings until they reach fledging stage and leave the nest, approximately two months after emerging from their eggs. The male will return to the same nest for several years, rather like that other great migrant bird, the swallow. Here at the centre, visitors have the privilege of seeing the young birds, and noting their progress in terms of size and plumage development. Adult birds have the white body and ruff feathers, black wing coverts and those striking red legs and bills, whose colour largely derives from their diet, like the flamingo.

And the very young birds are truly very cute – all fluffy, with those unbelievably big feet! 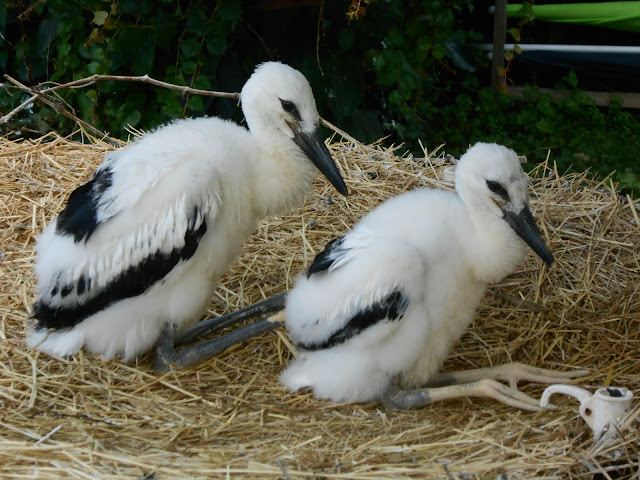