Today I went off to see The Tudors exhibition in Paris and before, during and after the trip I could not stop humming the infuriatingly catchy Sacré Charlemagne sung by France Gall in 1964, It was released after Laisse tomber les filles and shortly before she went on to win the Eurovision Song Contest with Poupée de Cire, Poupée de Son, written by Serge Gainsbourg.


The teenage France Gall did not appreciate Sacré Charlemagne, composed by her musician father to the lyrics of a children's song, but sing it she did and it proved to be a huge success in many countries around the world. I am not quite sure what she must have thought of the original video that accompanied its release, but it certainly has a style that finds no equivalent today. Its odd combination of the weirdest touches makes it unique since you cannot be sure just how far it is actually tongue-in-cheek. France clearly shines out with her clarity of voice and edgy-yet-innocent adolescent air that is hard to define... As for Charlemagne looking down over these young minions, well, what can you say? The statue version of this great imperial figure - the 'King of the Franks' - seems oblivious to such trifling teenage concerns, even if it was indeed he who encouraged reforms in education. 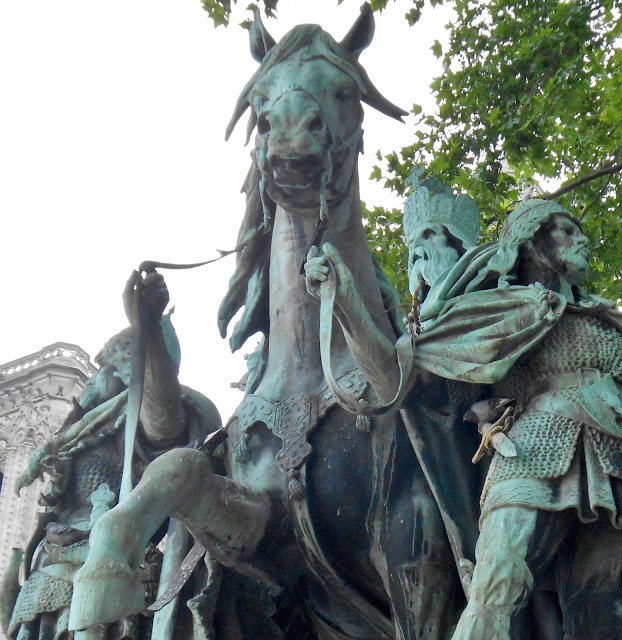 Sacré Charlemagne does seem to fit into a tradition of incredibly catchy French songs inspired by the most unlikely subject matter. Sheila, another singer of the so-called yé-yé generation produced equally infectious music, notably Les Rois Mages. Despite their great success on the Continent, I don't know how many of these yé-yé songs were actually heard of in the UK, but Françoise Hardy certainly appears to have been appreciated, then as now, for her music and physique of those years...

This was supposed to be curing me of my humming, but I'm not sure this has been a great help! Bonne nuit.
Posted by Beach-Combing Magpie at Thursday, June 25, 2015