Parallel world of Puppetry in an old Peugeot garage... Pseudonymo. 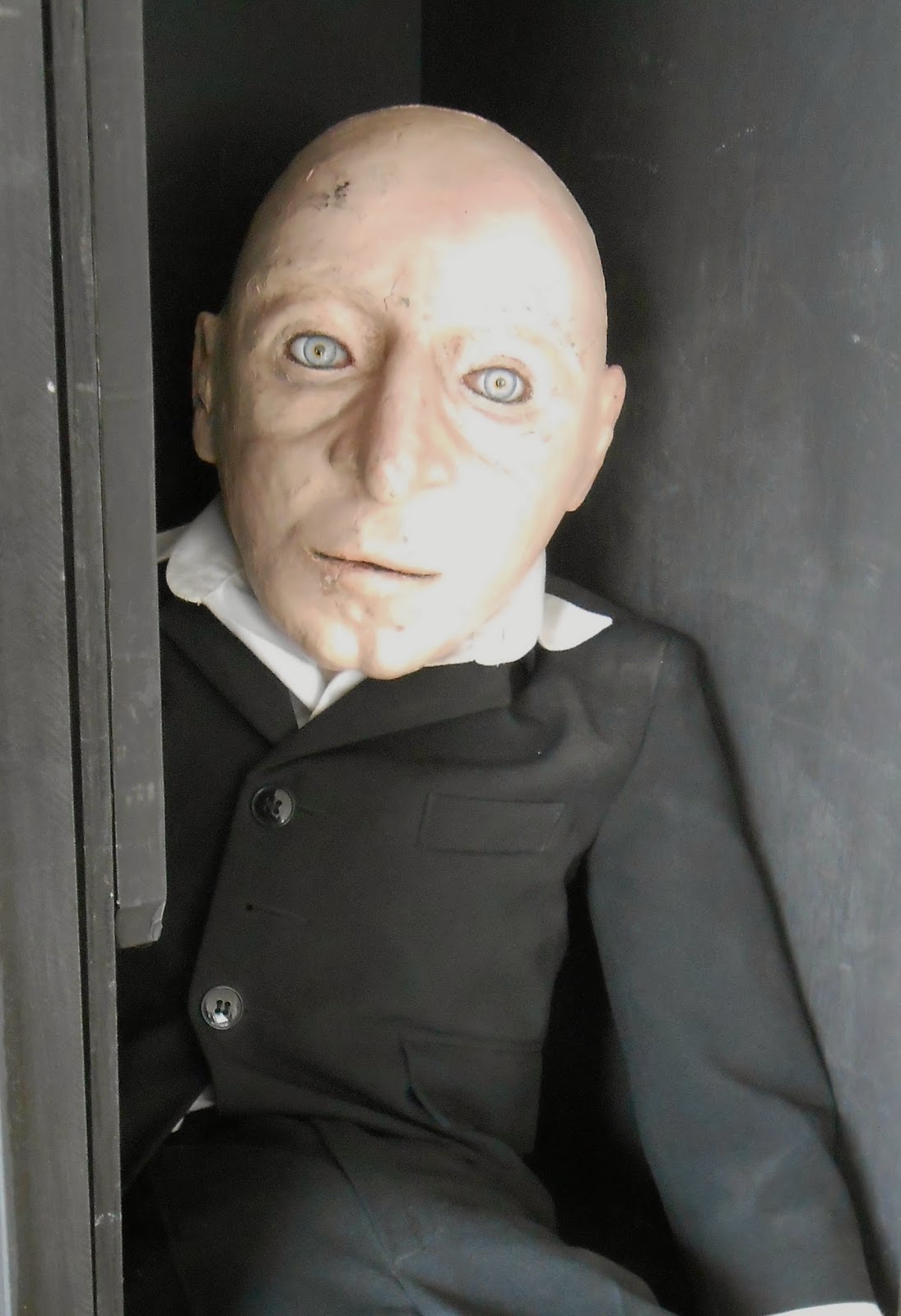 For the past few years I've been to visit artists' ateliers that are open to the general public for one weekend in early Spring. as part of a Journée Portes Ouvertes that the city council organises. This year the name Le Jardin Parallèle caught my attention and so on the grey Sunday afternoon I set off to discover what it was... 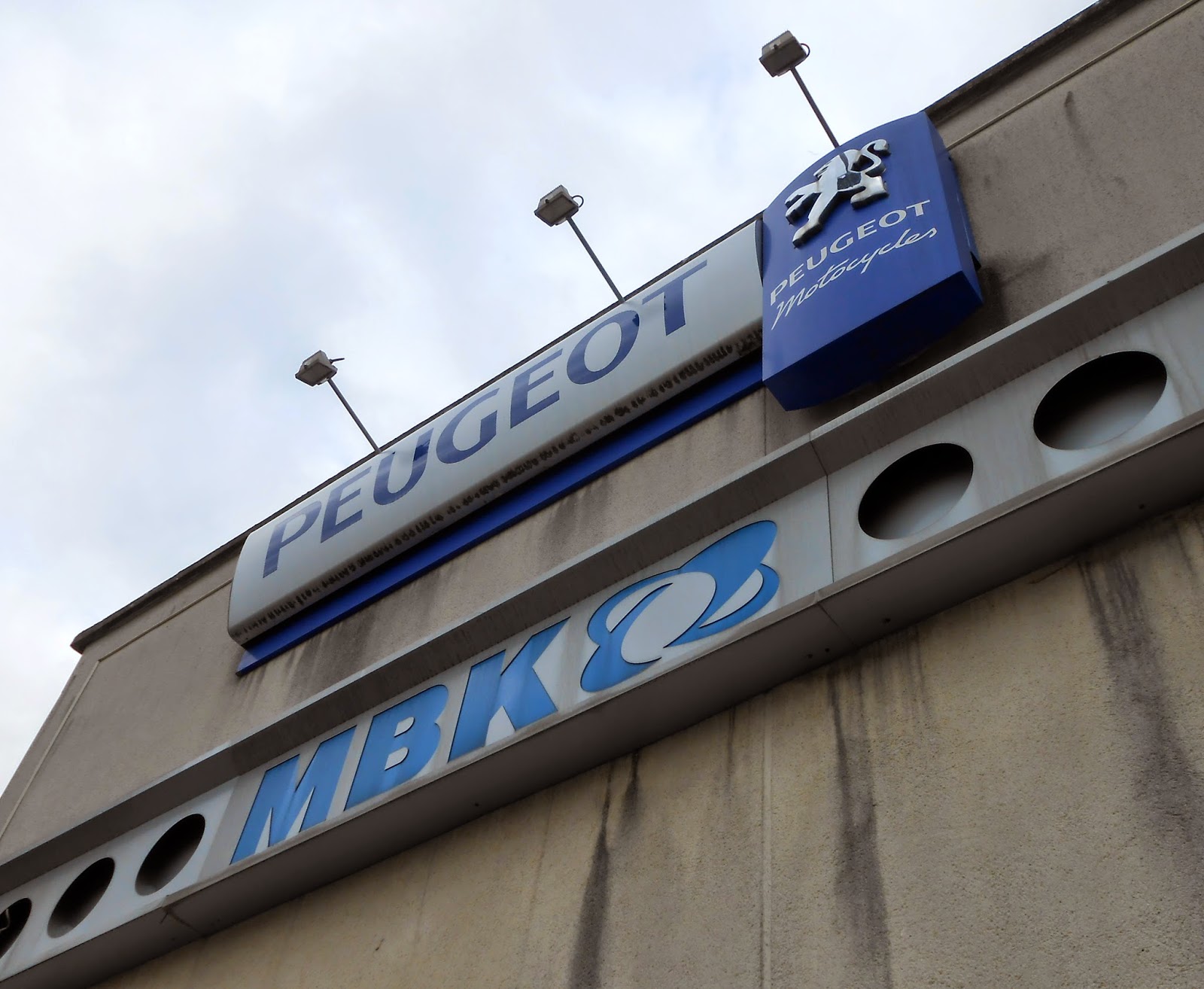 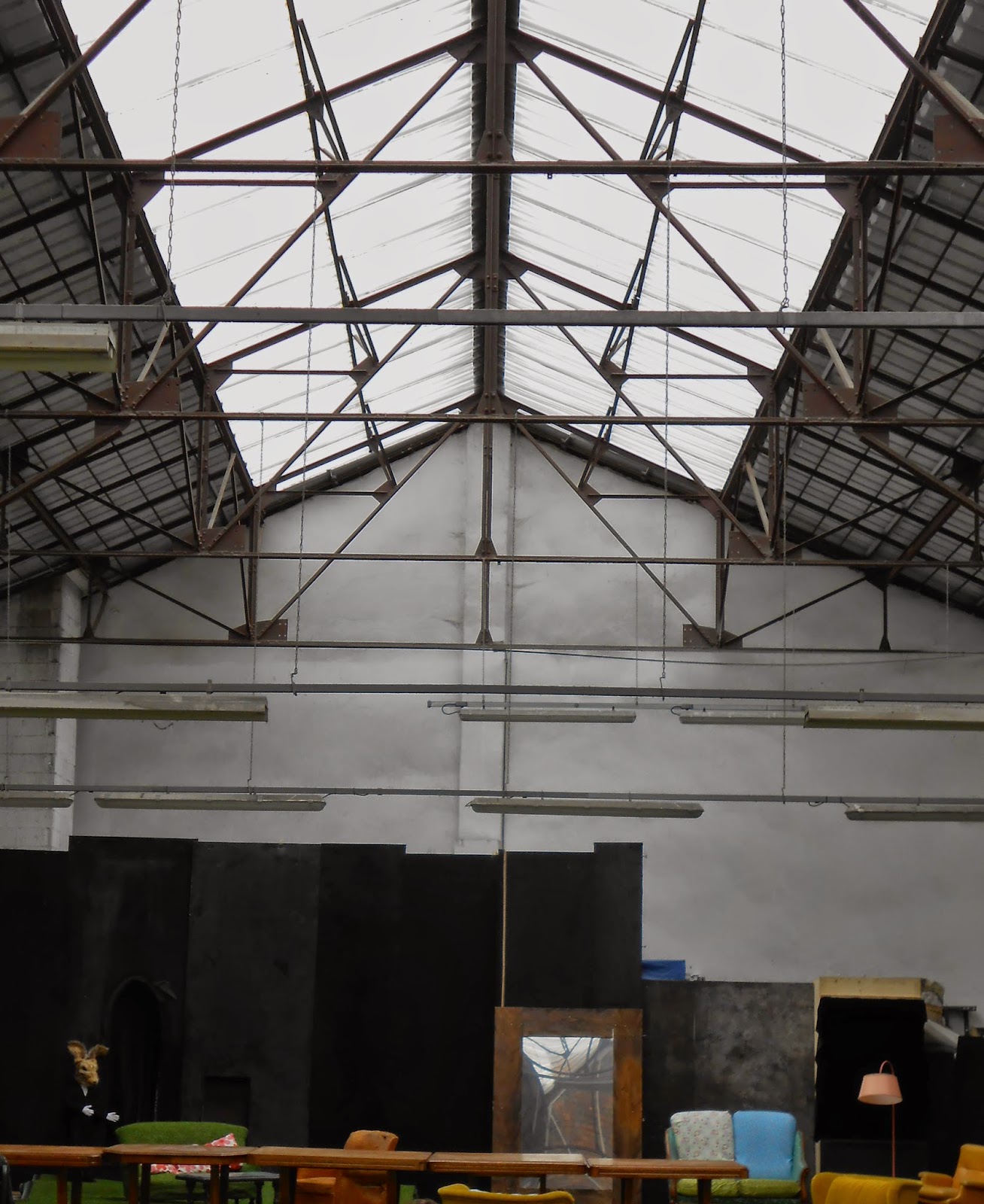 In fact, I hadn't prepared my visit and hadn't really taken in the fact that the atelier was within the old Peugeot premises. I was armed with the address and not much else.

Not surprisingly, the functional grey façade gave little indication of what lay behind.The place was very quiet; it was just after lunchtime, there were no other visitors and I didn't initially encounter any of the artists or organizers. 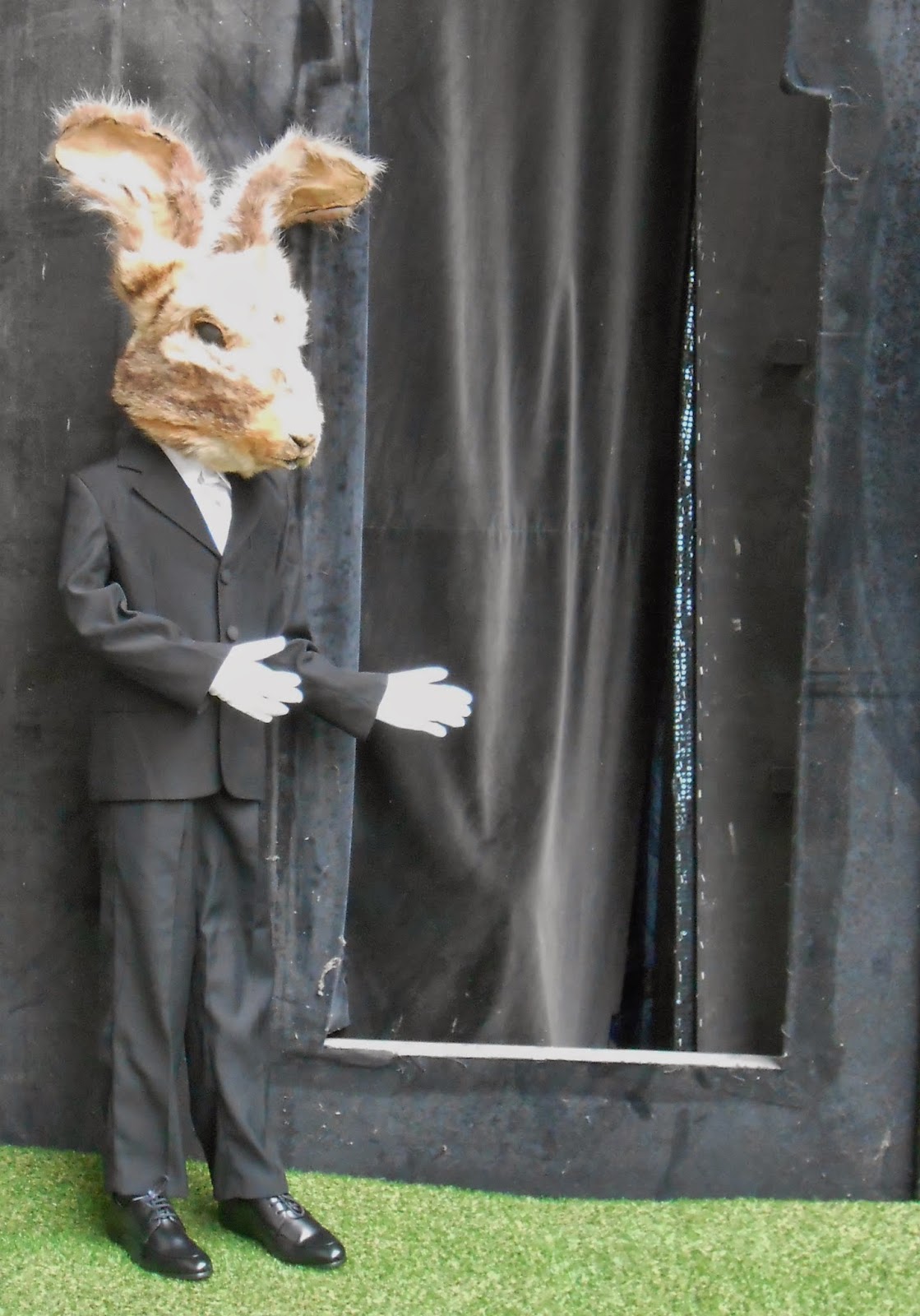 However, I found myself surrounded by a strange group of inhabitants, some of whom appeared eager to greet clueless visitors and lead them onto into this parallel world. Others presided over the events in the main hall of the garage with glassy-eyed haughtiness... 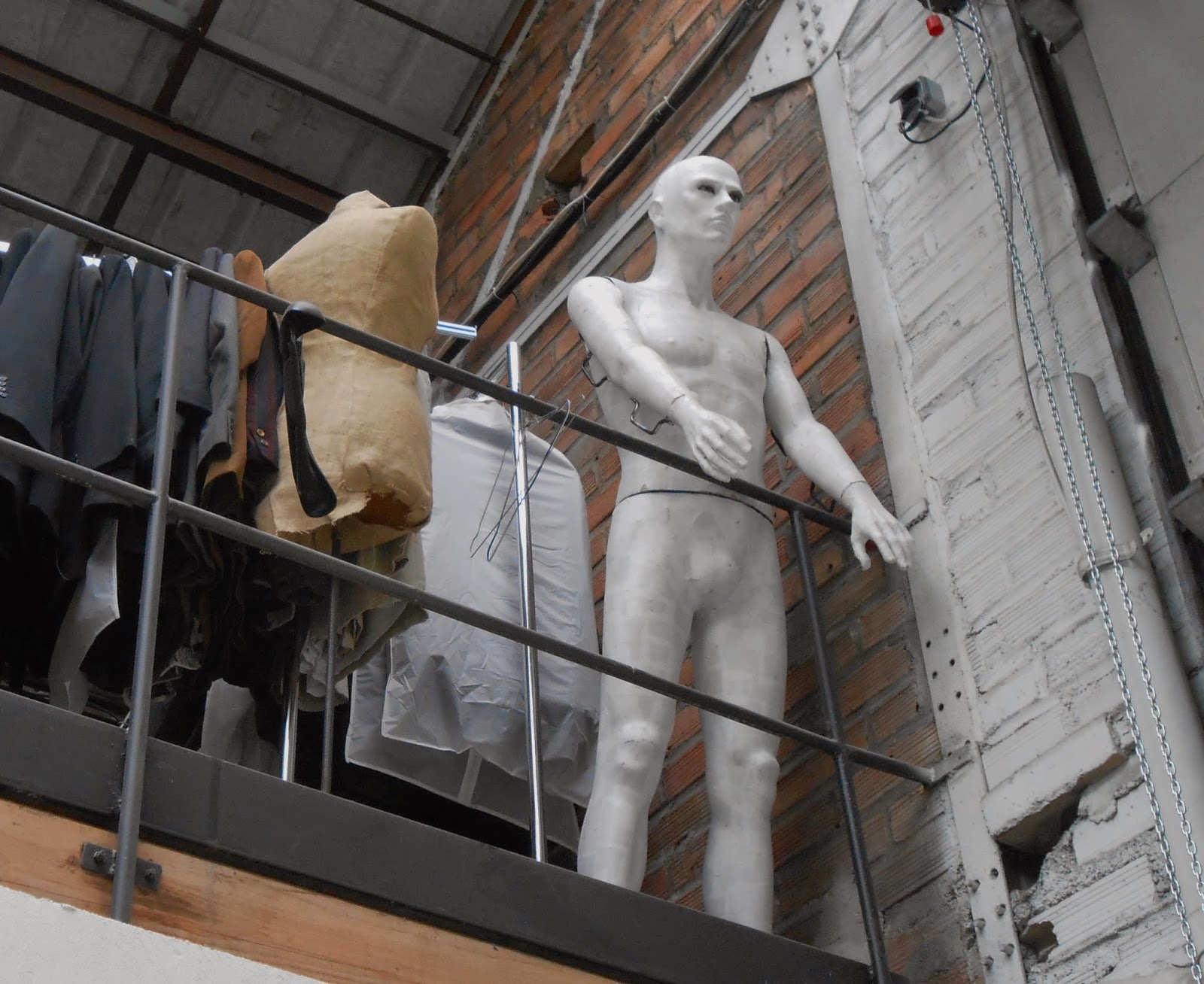 The unsettling tone was set with this mix of bizarre beings, bestial yet eerily human in gesture and attire. Self-conscious mannequins struck poses with greater and lesser grace and sophistication, making the visitor feel more like a voyeur, entering a realm that was familiar yet in no way reassuring. 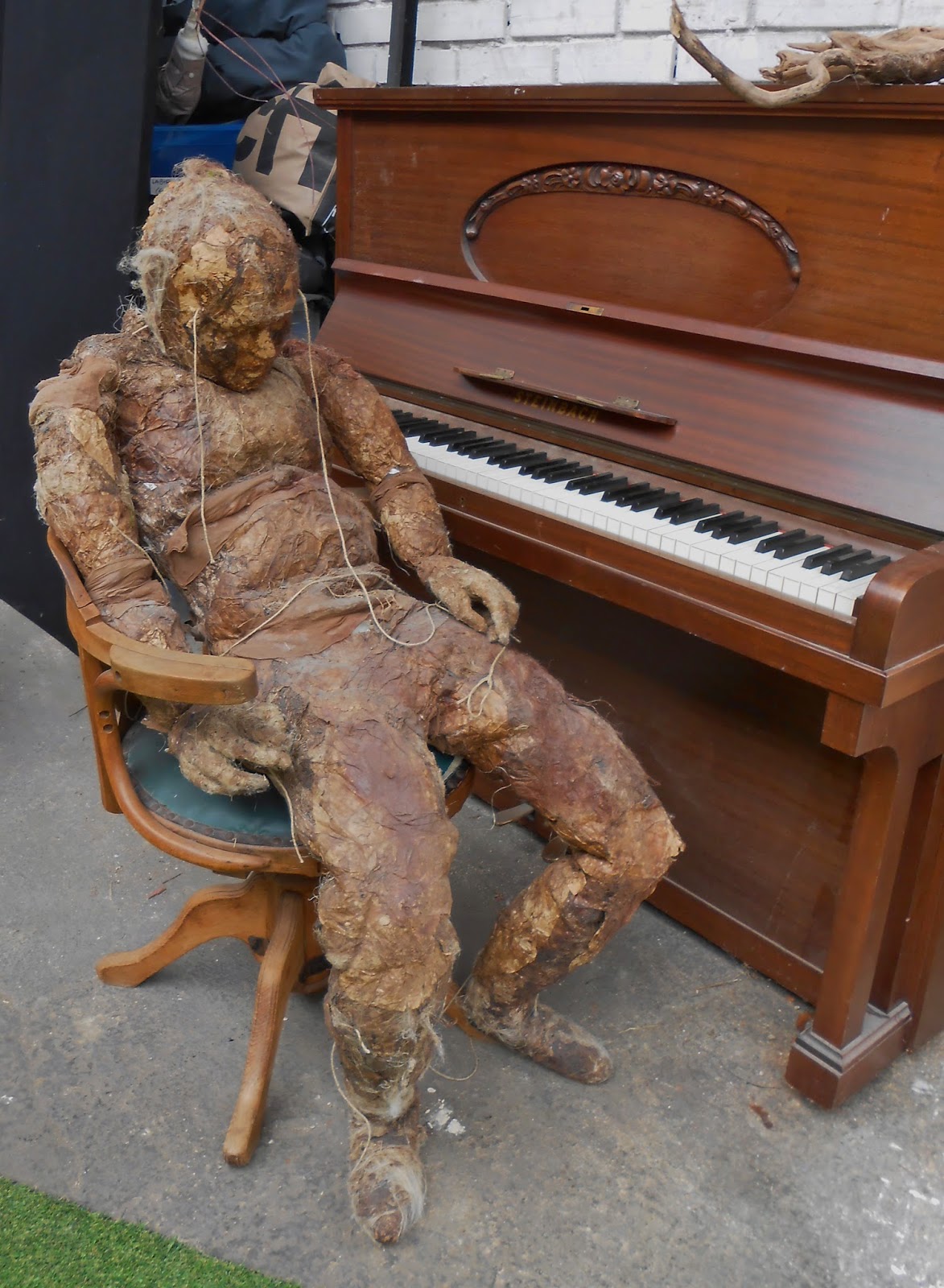 Some figures seemed to be utterly world-weary and indifferent to the proceedings, slouching with great insouciance, but still made me feel very ill at ease. 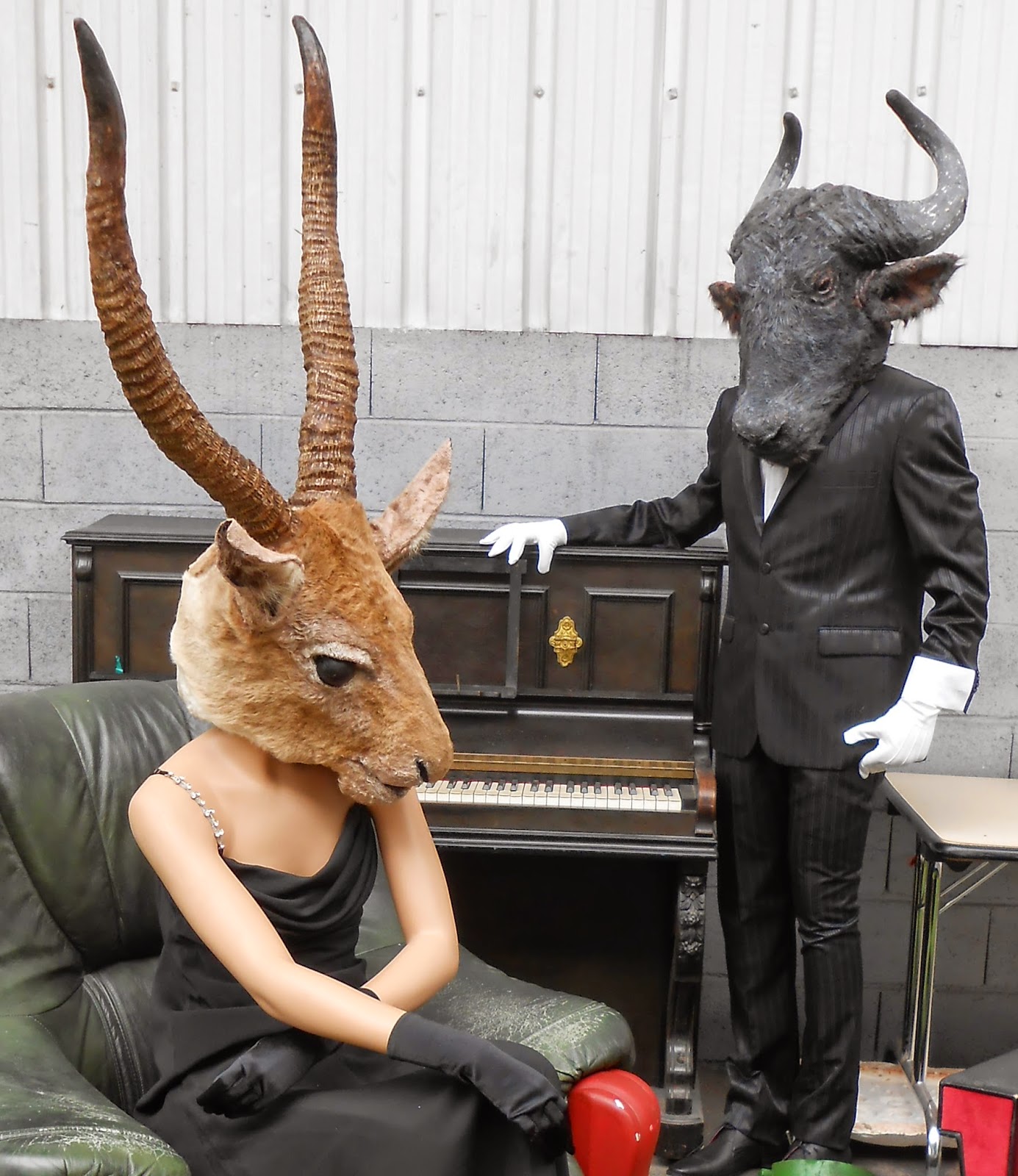 Other individuals offered a cool elegance yet still gave the impression that the visitor was intruding in this personal space and their caginess seemed to radiate off them. 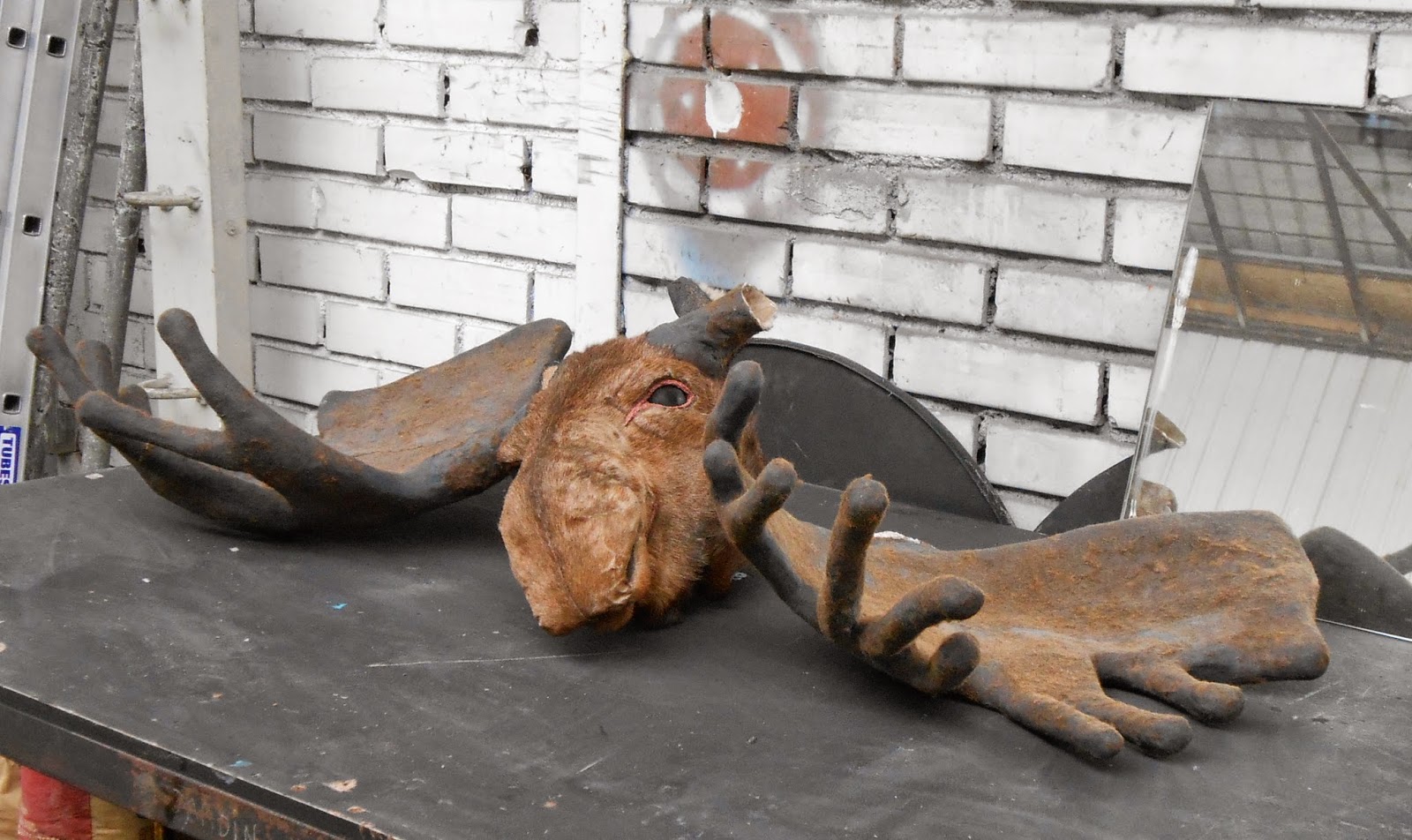 Finally I met a human who kindly showed me around the building and introduced me to the man behind Le Jardin Parallèle: David Girondin Moab. 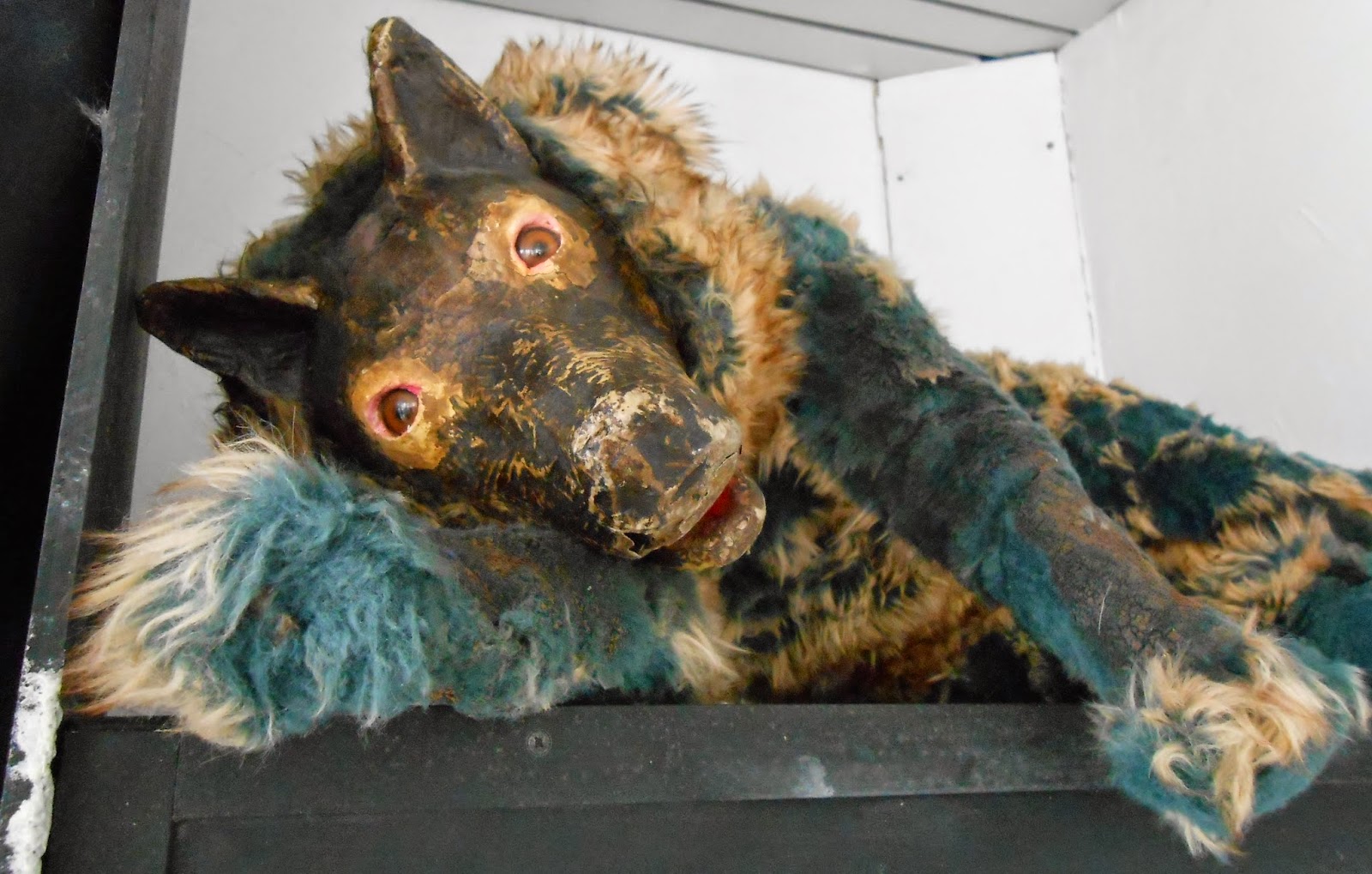 In fact, Le Jardin Parallèle houses La Compagnie Pseudonymo, which itself is vitally linked to other important artistic ventures in the universe of marionnettes and stage performances - le spectacle. 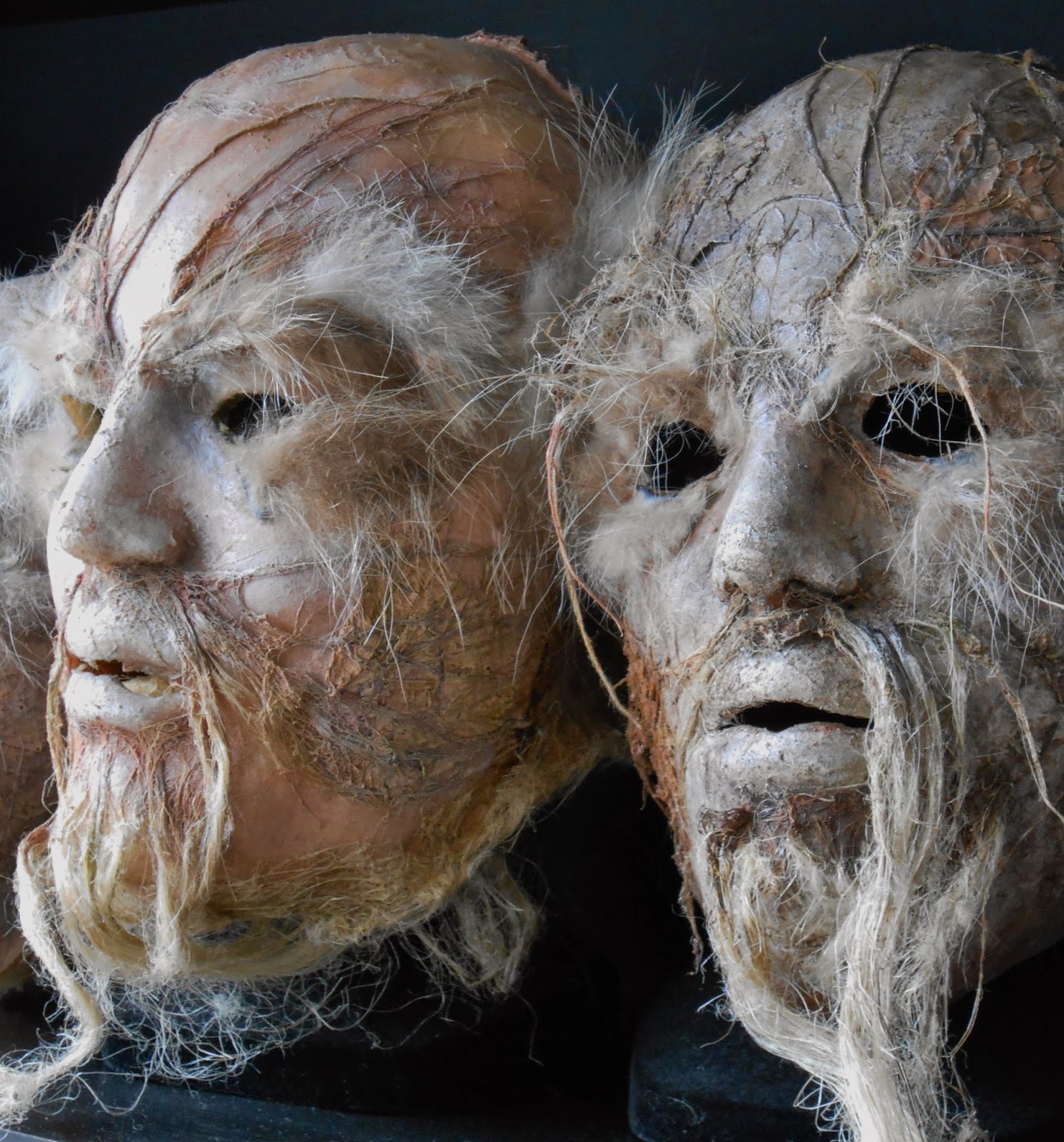 The company Pseudonymo, set up in 1999, is the work of  Moab, a former qualified student of the Ecole Nationale Supérieure des Arts de la Marionnette (L'ESNAM)  of Charleville-Mézières. 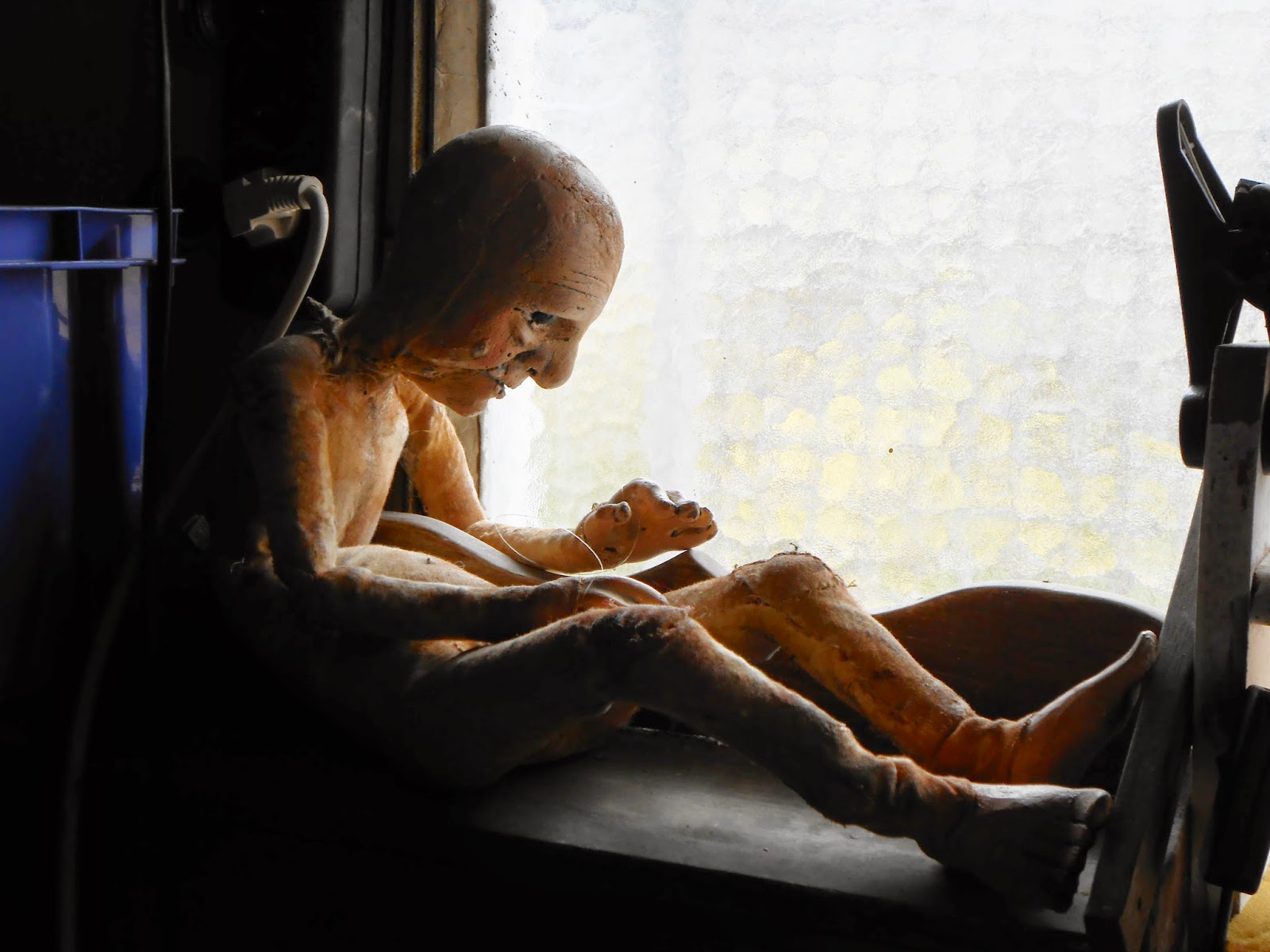 David Moab currently runs Pseudonymo, alongside Angélique Friant with the objective of helping and housing other marionnettistes of varying nationalities, often young graduates of l'ESNAM, to establish themselves both in the Champagne-Ardenne region and far further afield. 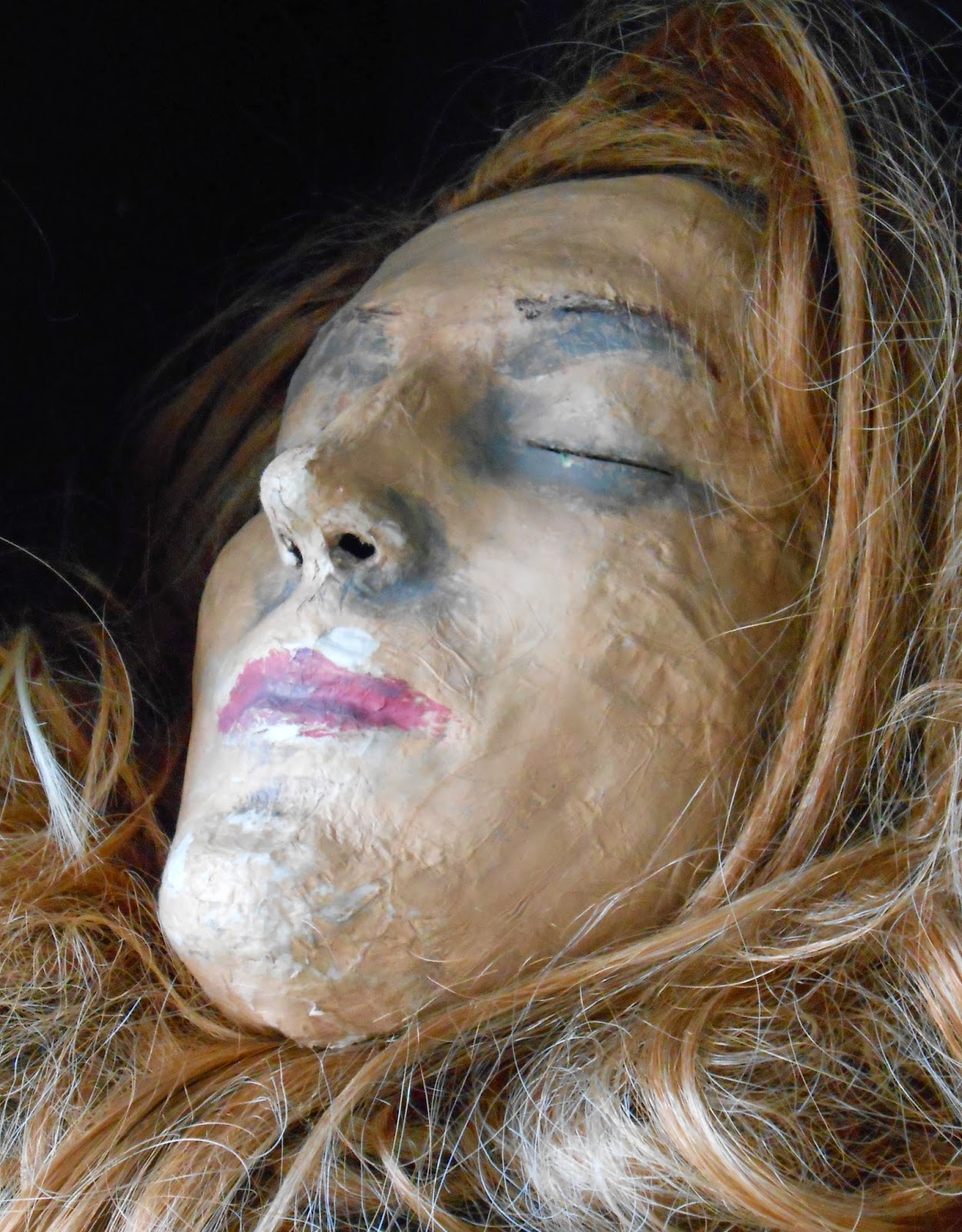 Now occupying the former Peugeot garage, Le Jardin Parallèle appears to be a world away from the prosaic practicalities of the automobile industry. However. Le Jardin is above all a "laboratoire marionnettique", dedicated to the creative mechanics of a universe that brings together all the arts. 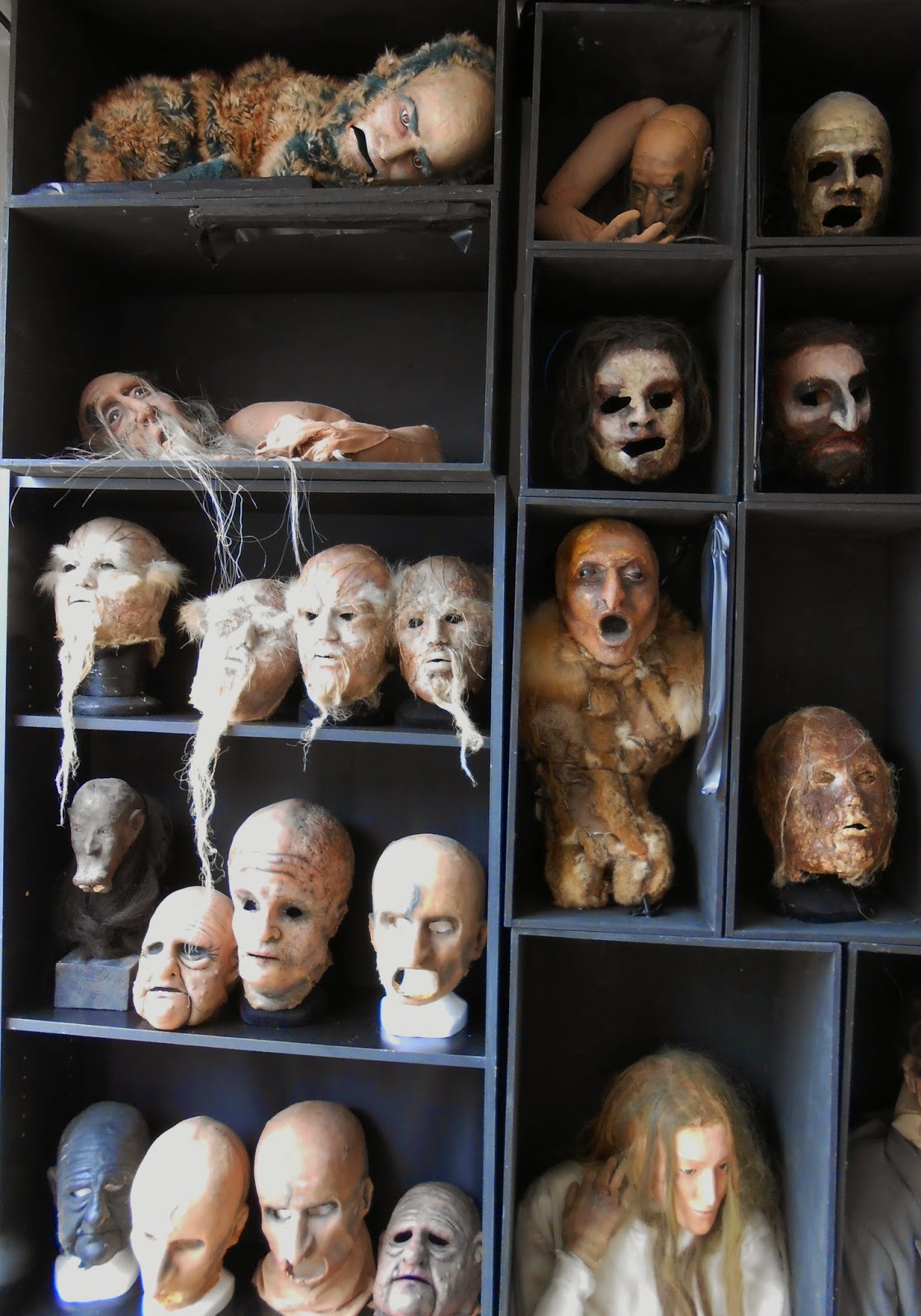 These all form a work composed of painting, sculpture, stage-sets, props, costumes, video, music and light, along with the marionnettes, of course. Each component plays an integral part of a whole, like essential cogs in some weird, organic machine. 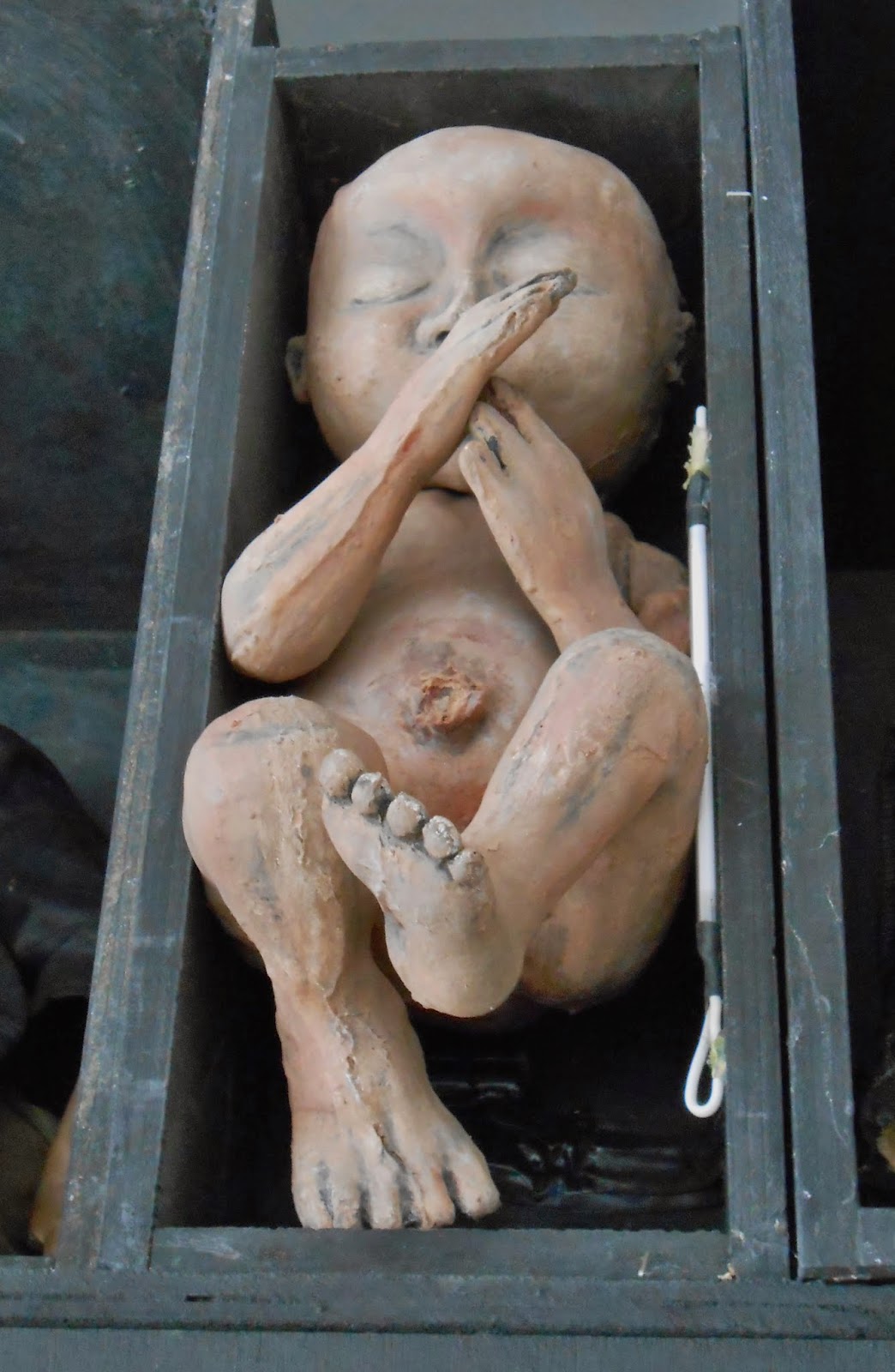 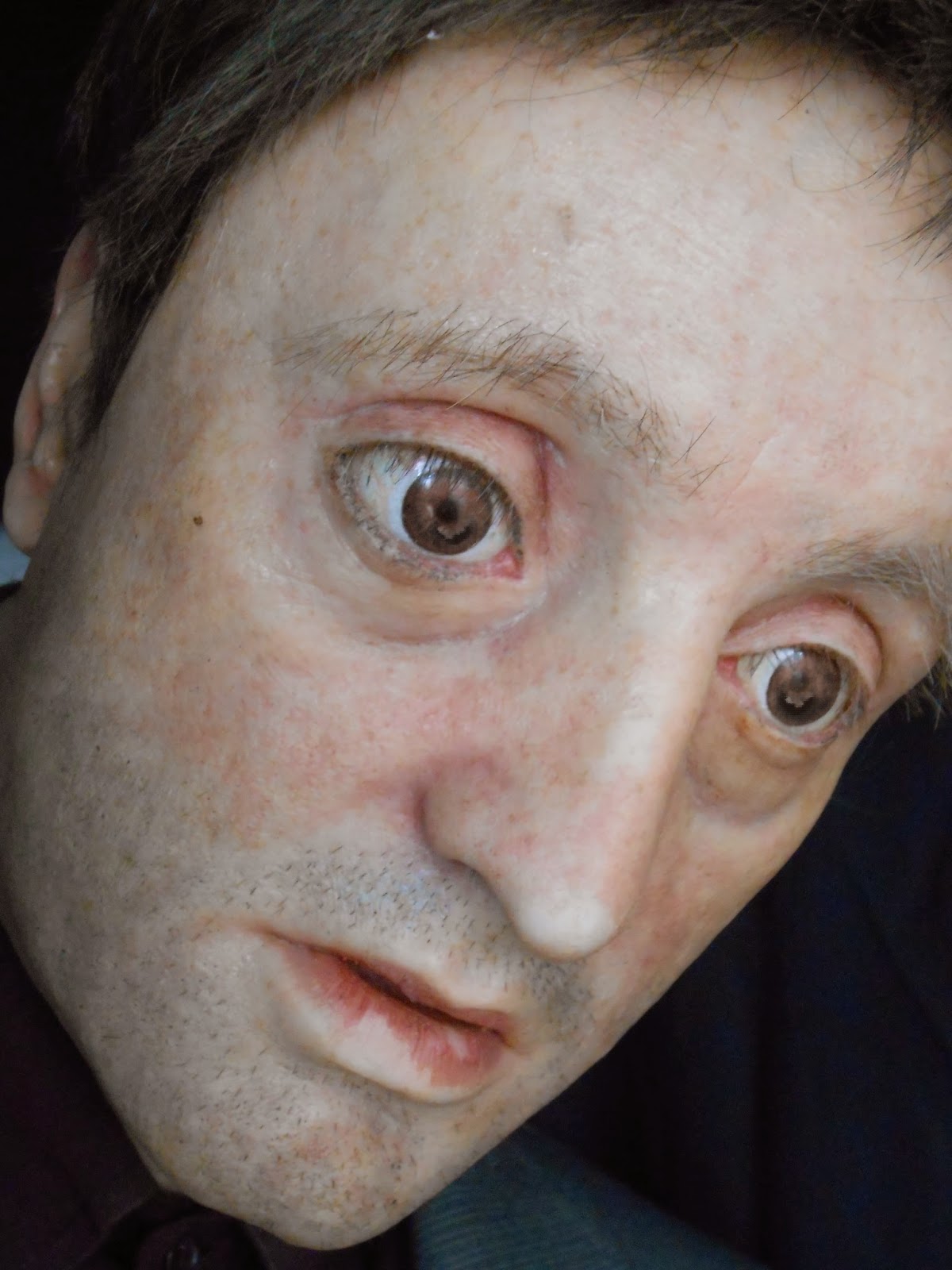 Not only does Le Jardin deal with the different facets of creativity in le spectacle, it also covers the adminstrative and technical aspects involved in the running of a marionnette company.

When I spoke to David Moab, he told me of the company's various projects to get young people aware of, and involved in, the world of marionnettes. And what a world... I wish I had known more about this as a child/teenager and had had my eyes opened to the possibilities of this rich, vast area of creativity. 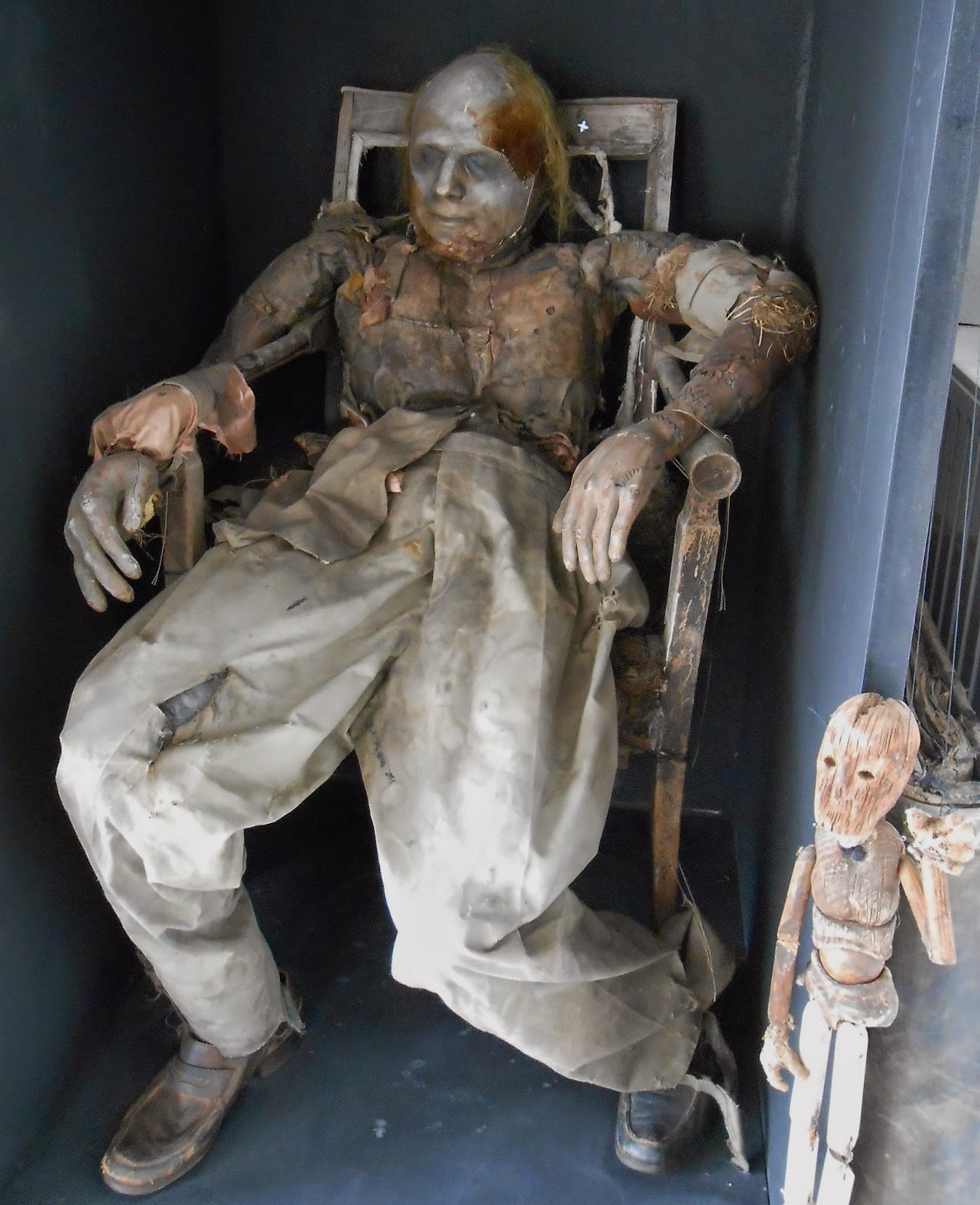 Unfortunately, my knowledge of puppetry didn't extend any further than the occasional Punch and Judy show and I certainly didn't know of the existence of an actual school, devoted to the marionnette. 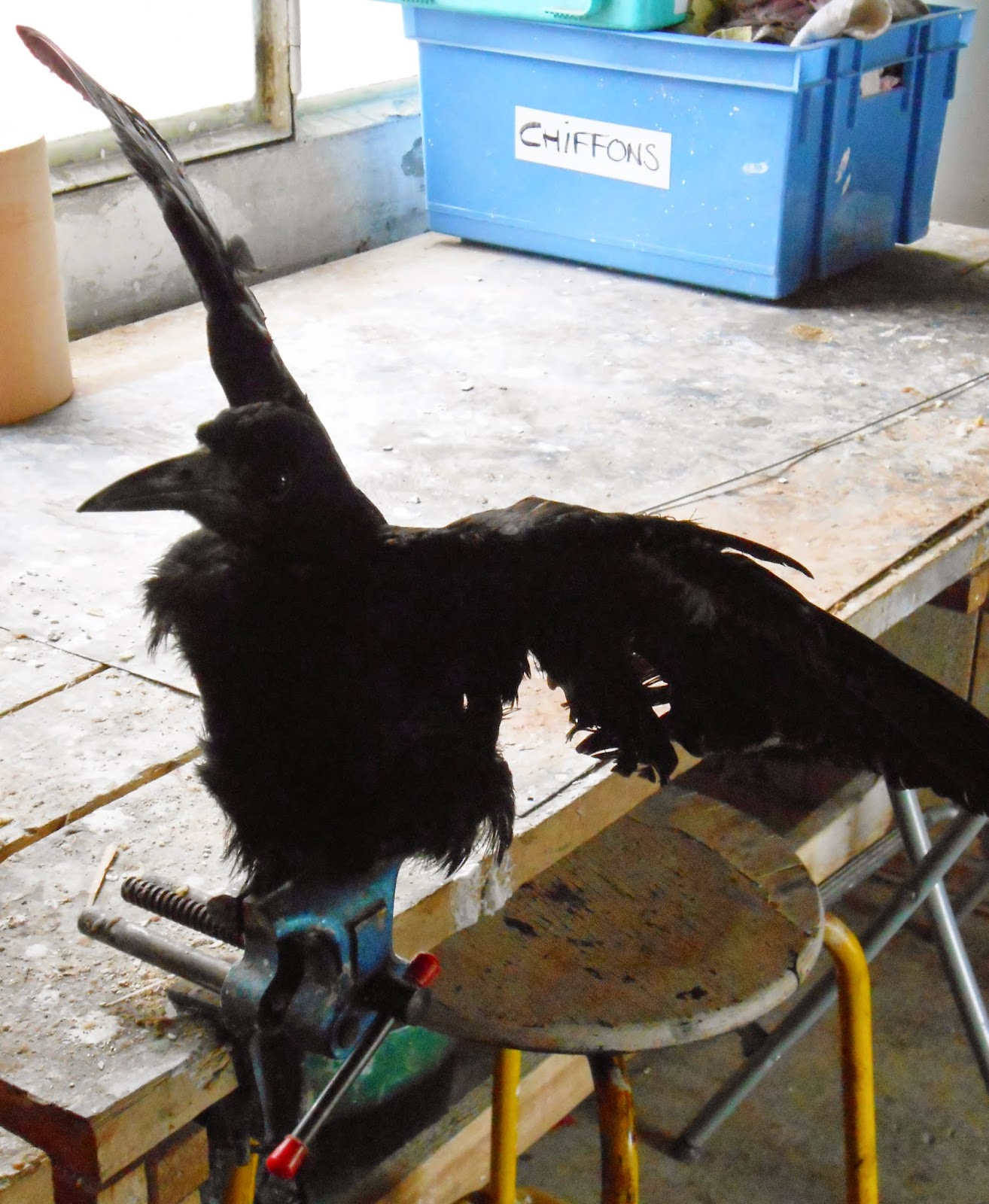 Over the past few years, I've been to the Festival Internationale de Marionnette at Charleville-Mézières and so have finally managed to get a glimpse of what this particular universe offers the spectators and the artists behind its creation. 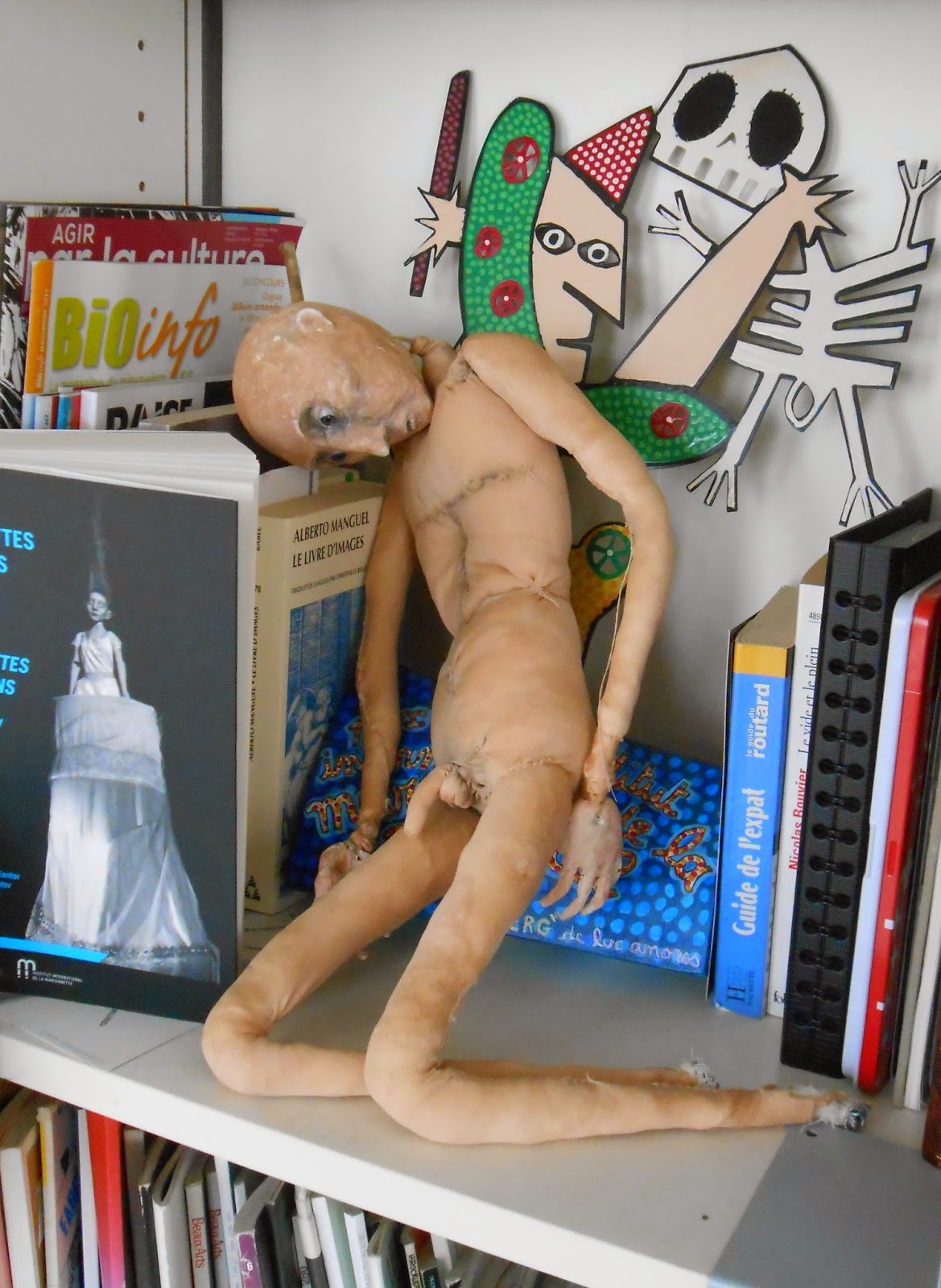 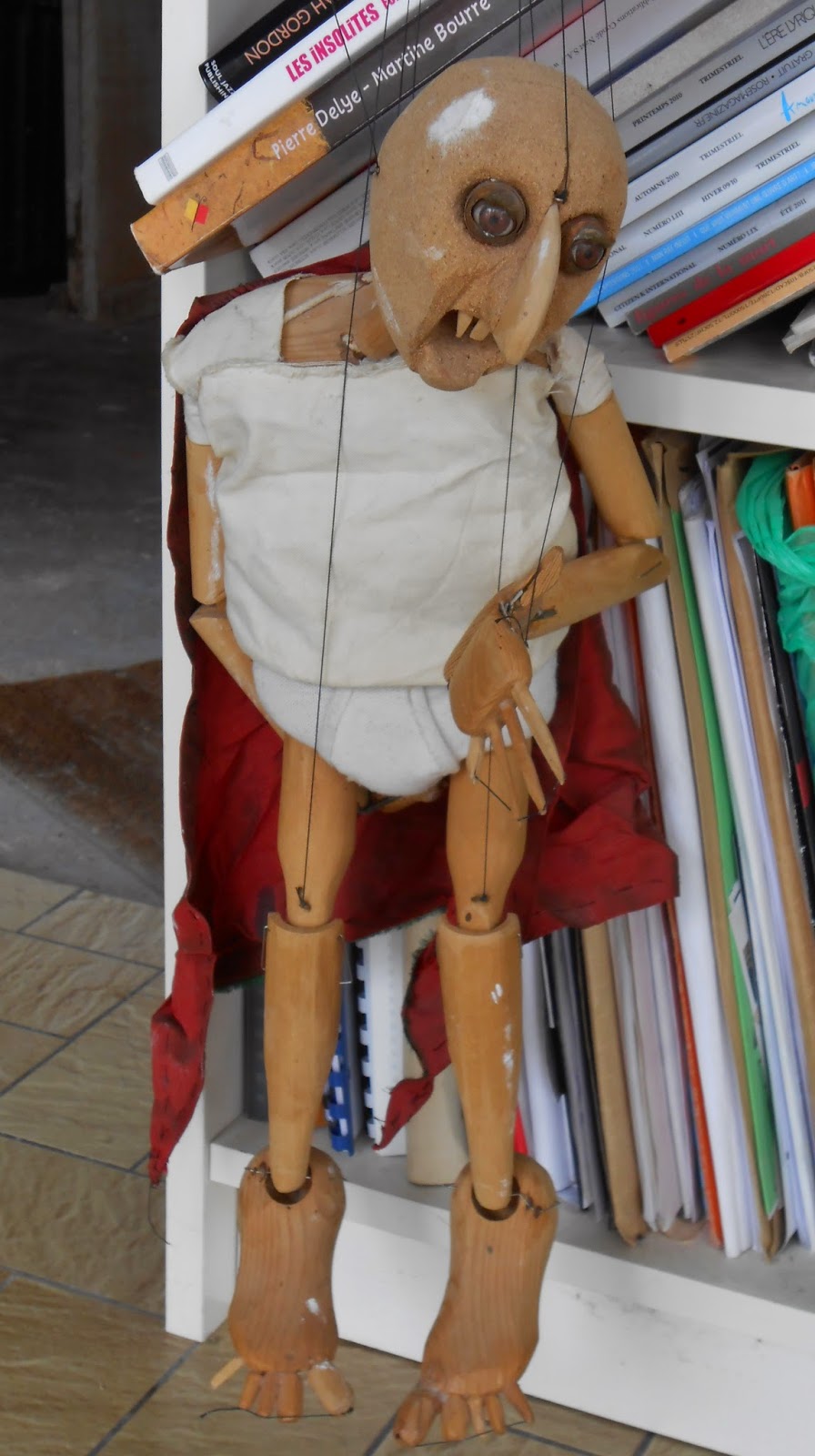 As mentioned, this art form draws on all the arts in a unique manner, creating a whole that plays on the senses and our apprehension of reality itself.


Here is a vast theatrical play of illusion as the real and unreal intertwine, leading us to question what is concrete and what is creation. 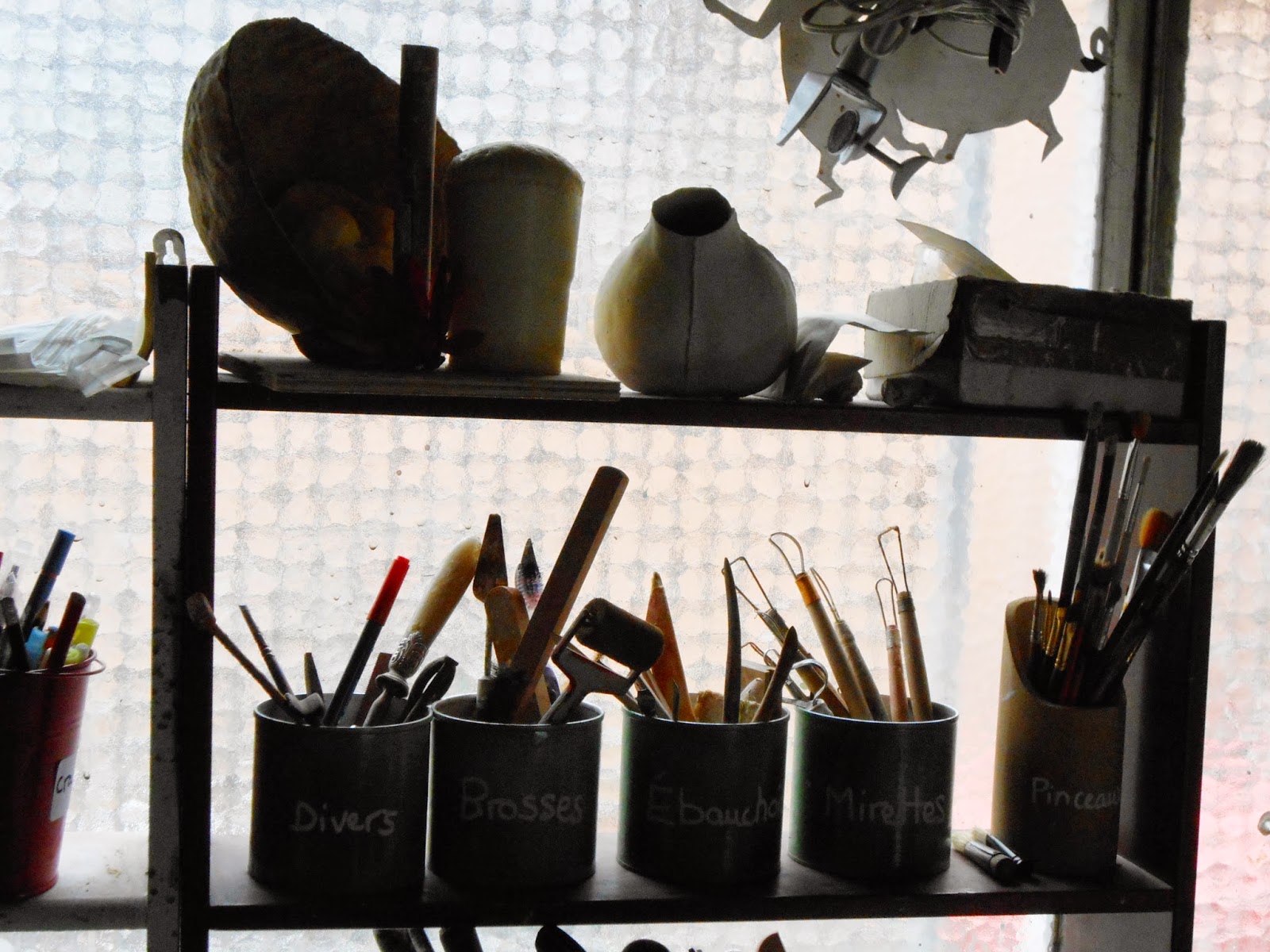 The factual, fictive and fantastic are woven together in le spectacle, often based on novels or short stories that draw on the blurred images of life, death and the ghostly middle ground between. 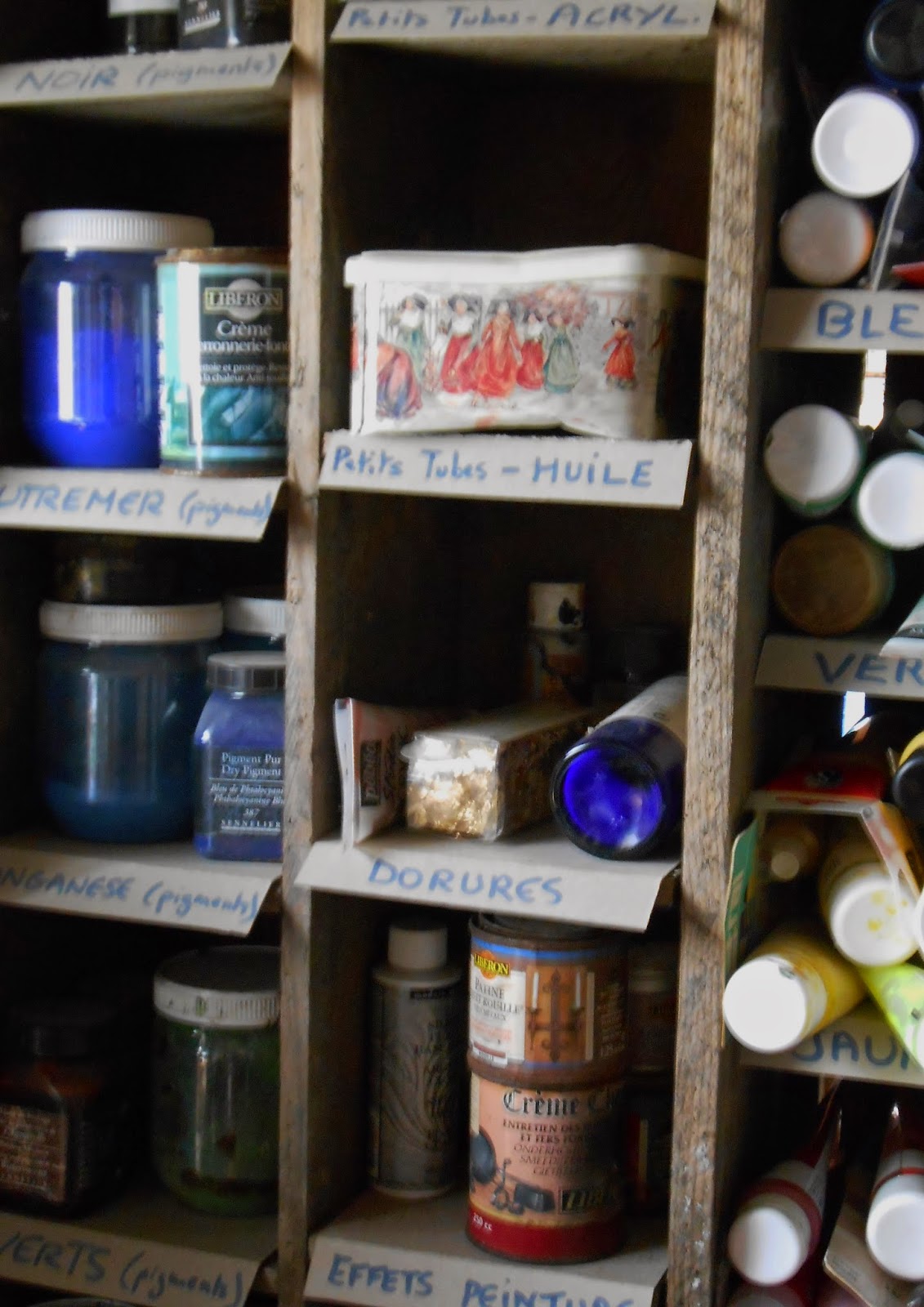 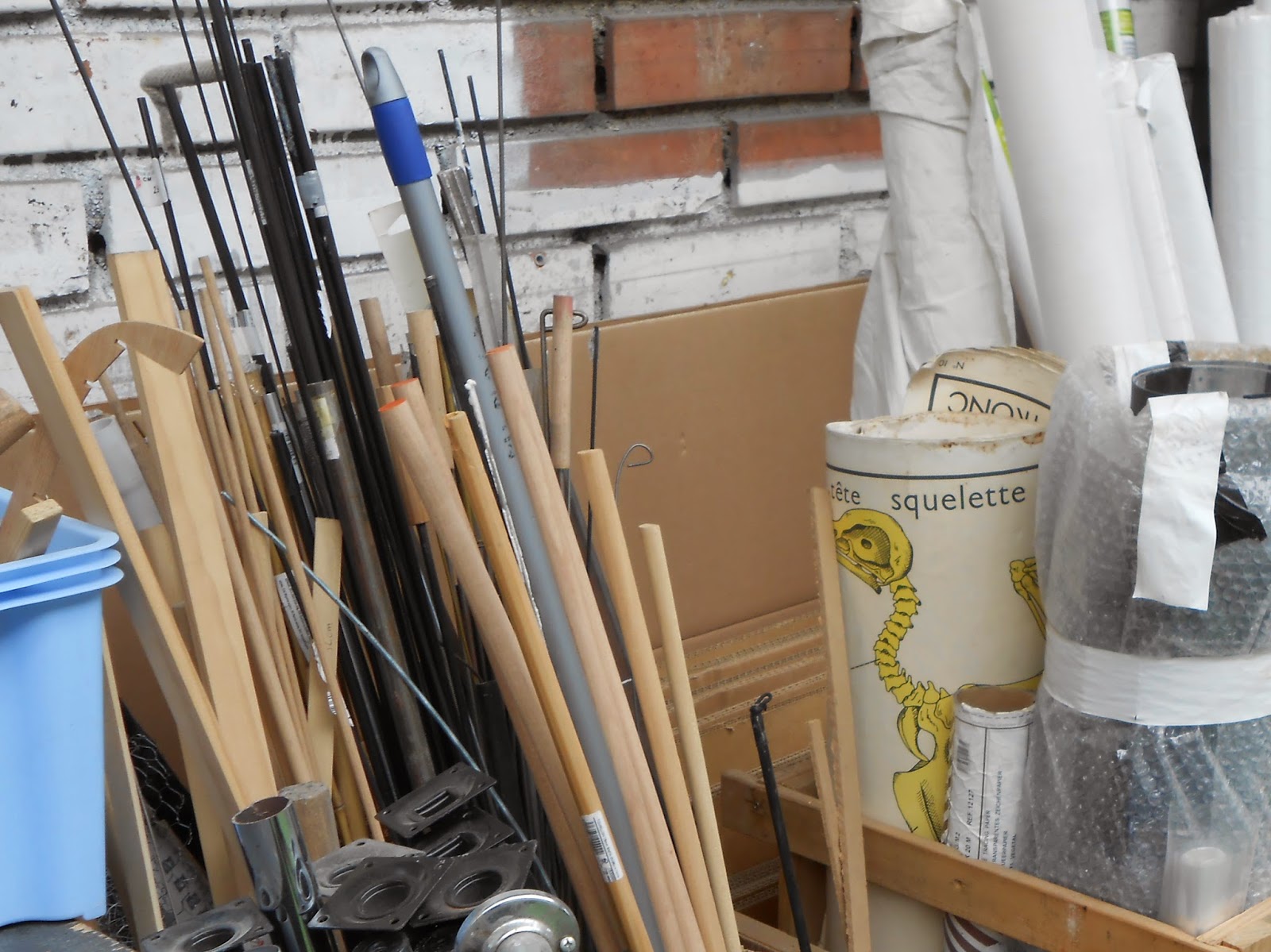 The representations and realities of Man's existence are mirrored, reflected and refracted in the marionnettes, "Ces demi-morts".

I was able to look around the atelier in Le Jardin, and here I did indeed see the eerie forms of the marionnettes which have a troubling realism. Animals, humans and the inbetween populate the shelves and storage spaces, in various stages of creation and finition... 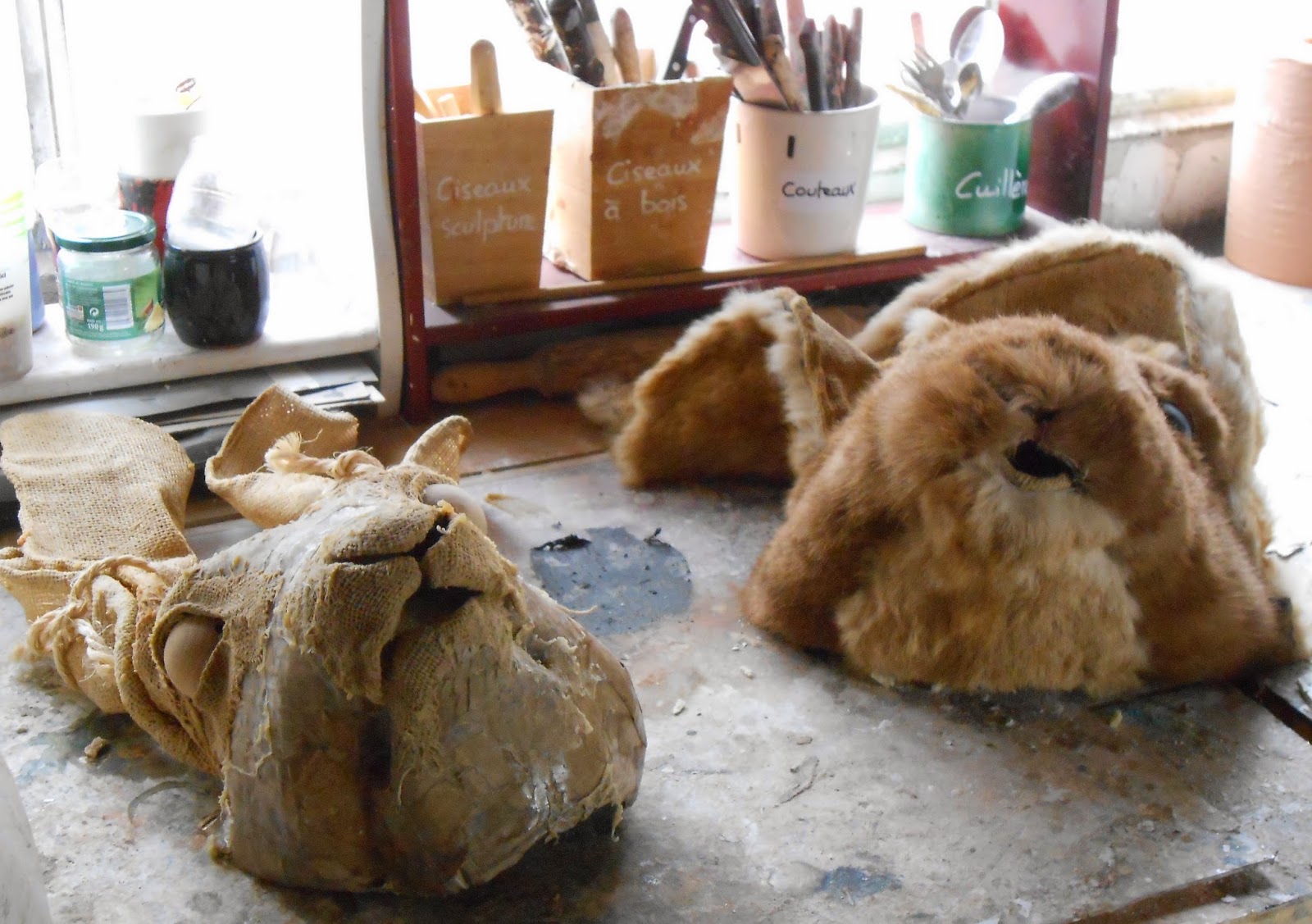 One of the most important displays of the le spectacle and the marionnette is the festival Orbis Pictus, again organzed by David Moab. Once more, the many shows that make up this festival took place in the Palais du Tau this year, with a certain number being held in the courtyard, overshadowed by the imposing cathedral, 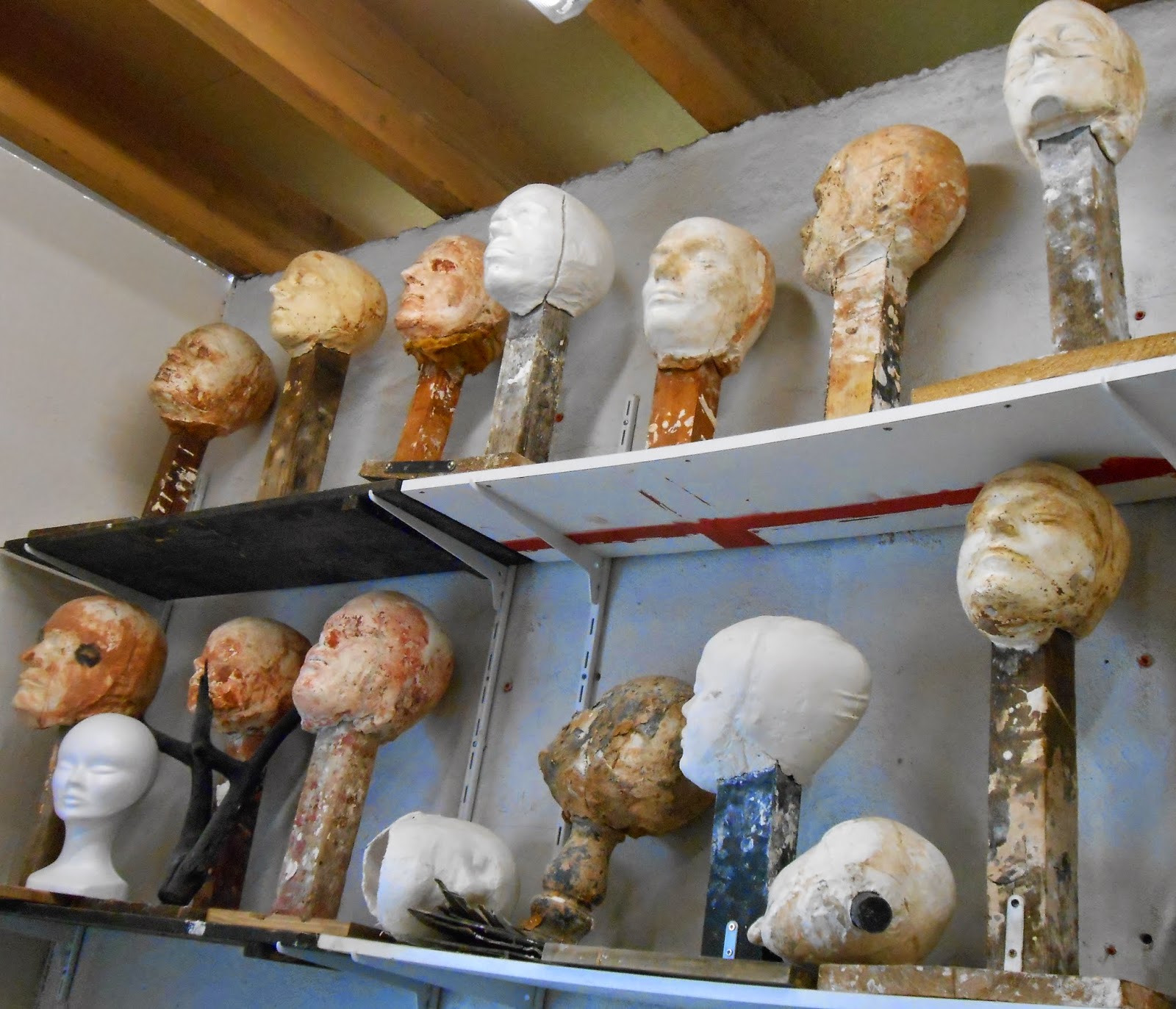 The name, Orbis Pictus, is a reference to the written work of this name - the title meaning "The visible world in pictures".


This book, dating back to the 17th century, was an encyclopaedia destined for children, in order to awaken their senses to the world around them... Seen in this light, the choice of name seems very appropriate... 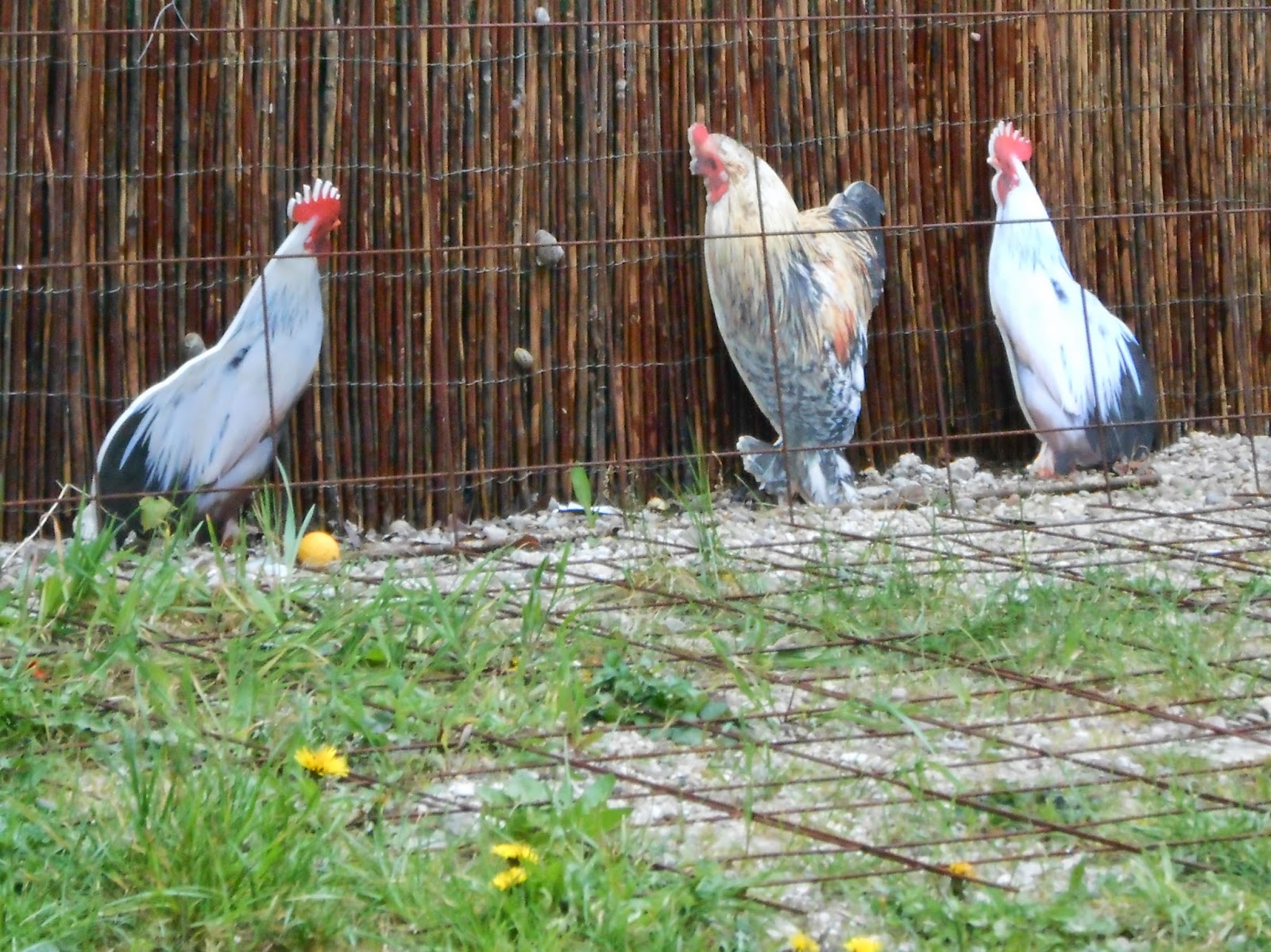 Back to Le Jardin Parallèle; I'll eagerly return for a visit next Spring, but I really can't wait to go back to the Orbis Pictus festival, and, of course, Le Festival Mondiale des Théâtres de Marionnettes. 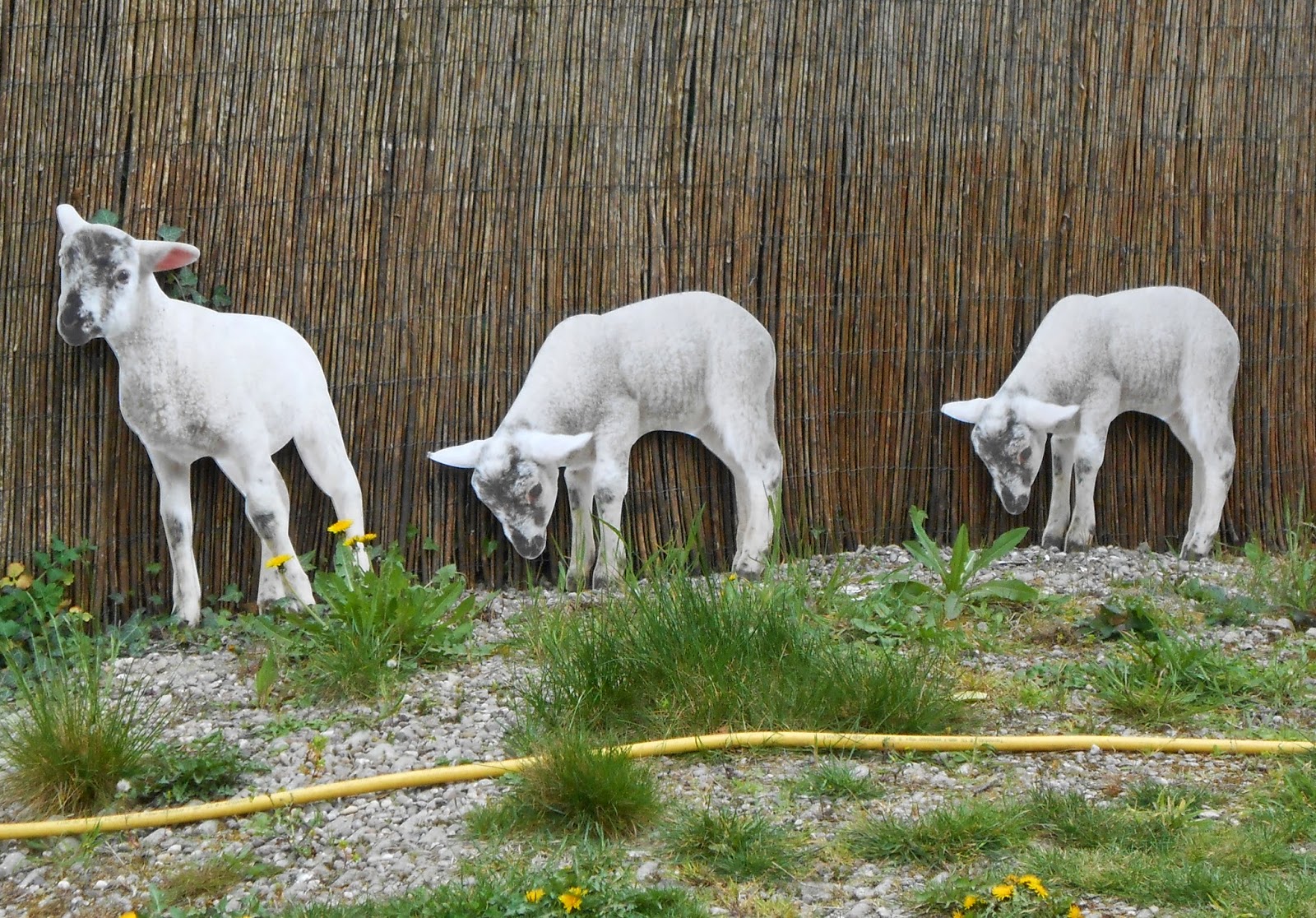