Krakow Szopki (Nativity crèches)... What to do with your Easter egg wrappings...

Ever since I can remember, I’ve loved the tinsel-like foil and jewel-coloured cellophane sweet wrappers that envelope such mixed goodies as Quality Street and Roses Chocolates. These I have coveted almost as much as the contents of such packaged treasures. While the pleasure of eating these chocolates and toffees is very fleeting (and the consequences less so) the magic of the rustling empty wrappers lingers on, always making me want to hoard this precious stash, Gollum-style. I find it hard to part company with this treasure and so usually end up indulging the ingrained hoarding instinct. Naturally the harvest of Easter eggs with their metal-foil covering has just added to the magpie dilemma and led to more pondering over the question of what to do with such riches. The magpie’s eye hasn’t brought me inspiration yet, but I think this year’s tinsel treasure will somehow be used with the filmy, filigraine butterfly napkins that I came across.
However the whole creative thought process reminded me of a truly magical exhibition that I saw here in Reims several years ago. Sadly this was before I had a digital camera, a computer or any notion of what a blog was, or any internet research, for that matter…  I don't have any photos of my own,  and don't want any trouble from 'borrowing' other people's so here are a few videos to give you an idea.

This mesmerizing Christmas exhibition featured the work of Polish craftsmen, and many children (past and present) who do know exactly what can be done with such under-valued domestic detritus. Their craftsmanship is largely brought to light precisely by elements of such recycled treasures that are generally neglected or meet total disdain in our squeaky-clean, one-use-only culture. These were the Krakow Christmas Crèches – the szopki – of all shapes and sizes and levels of sophistication. All demonstrated, of course, the skilled use of shiny scraps that seemed to replicate the jewel-like colours of the best stained-glass Gothic window from all over Europe. 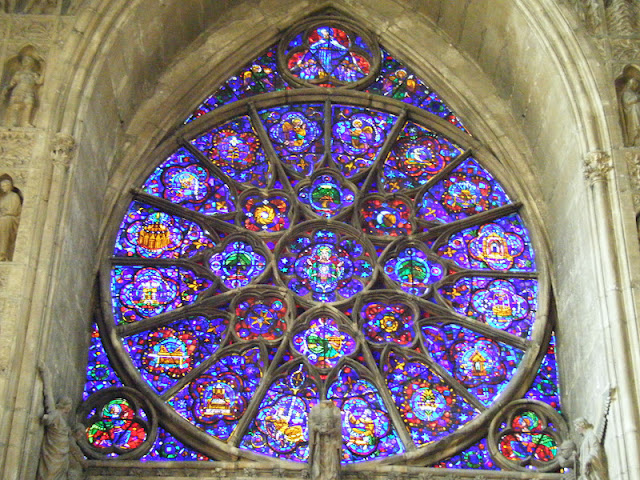 Even if many of our children don’t even notice these same lavish wrappers and coverings in their initial form, over the generations Polish children have coveted and collected theirs in preparation for the decoration of their szopka construction. This is largely in order to enter the annual Krakow Crèche competition, although, needless to say szopka creation is a long-established tradition in Poland and is one that has reflected, to varying degrees, the social, political and cultural fluctuations over the centuries.
The city of Krakow is considered to be the historical capital of Poland, both displaying and maintaining Polish culture. Wawel cathedral, often featured on the szopki, was considered to be one of the holiest places in the country and was the site for royal coronation, and burial for the majority of Polish kings. It was perhaps fitting then, that the Krakow crèche exhibition should be held in the banquet hall of Reim’s archiepiscopal palace - the Palais du Tau – next to the cathedral where French kings were crowned up to the reign of Charles X in 1824.
However, to see the largest and most beautiful examples of szopki you need to visit the historical museum of Krakow itself, in the Grand Square, or otherwise witness the Krakow crèche competition that takes place on the first Thursday of December, each year, around the statue of the Polish poet, Adam Mickiewicz.
On the traditional sound of the bugle call from the nearby Church of Saint Mary at midday the szopki are transported to the museum for inspection by the official jury. The beauty of the surrounding buildings is reflected in the szopki which seem to compete with the original architecture in their elaborate, ornate constructions. Nevertheless, these architectural references are but one element of these crèches on which symbolic characters from legend and actual history vie for a place amongst the more customary Nativity scene figures.


It is above all in this strange, ever-changing mixture of symbols and references that the Krakow crèche differs from any other.
In Poland the term jaselka, literally meaning ‘cattle manger’ was used to describe the Nativity scene portrayed in special presentations from the Middle Ages. These scenes were said to have originated in Italy in the 13th century through the influence of St Francis of Assisi. The jaselka took on a dual aspect for these could be either be the crib scene itself, shown in a set complete with figurines to recreate a visual impression of the birth of Christ or were pastorals which were acted out, accompanied by speech, song and dance as a ‘living crèche’. In this manner, the jaselka were not unlike the pastorals from Provence in the South of France. 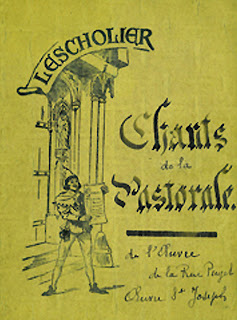 Indeed, like the Provençal version, the jaselka was expressed in local dialect and did not limit itself solely to the Biblical elements of the Mystery; figures of folklore and local legend play an integral part. However while the living crèches of Provence were largely replaced by inanimate model Nativity scenes following the suppression of religious expression in public presentations and Midnight Mass during the French Revolution in 1789, the early jaselka appear to have evolved in another manner. The Provençal crèche scenes were populated by santons (‘little saints’) – small figurines that decorated the sets that were used for personal viewing in each home as a vital element for the observance of Christmas. Both the sets themselves – often sprawling affairs that would bear landscape features – and the santons too – boasting such exotica as giraffes, reindeer and even a hippo - remained essentially static. The jaselka, meanwhile, was incorporated into sets that became increasingly elaborate and animate.

The initial key characters, once silent and immobile, were gradually replaced by animated ‘speaking’ rod puppets which inhabited the crèche sets which themselves evolved to incorporate mini stages. Such theatrical performances brought a new liveliness and vitality to crèche scenes, an aspect that was further enhanced when monks introduced humorous dialogues and stories to the usual Nativity presentation.
Like the Provençal scenes the jaselka would depart from the strict Biblical accounts through their gradual interweaving of secular and religious symbols, and the blurring between reality and the imaginary, the mixing of the serious and the satirical. The comic element of the jaselka reached a point where the performances were deemed unsuitable by the bishop and were banned henceforth. These irreverently flouted the liturgical mission of educating an illiterate congregation on the Mysteries of Christ, in the same manner as Gothic stained glass windows. The spread of lay material in the jaselka of the 18th century meant that the general public, faithful or not, came to the church in growing numbers to be entertained by sketches considered bawdy and inappropriate. Barred from the church, the jaselka evolved in order to satisfy the demands of the people and thus assumed a somewhat modified identity… 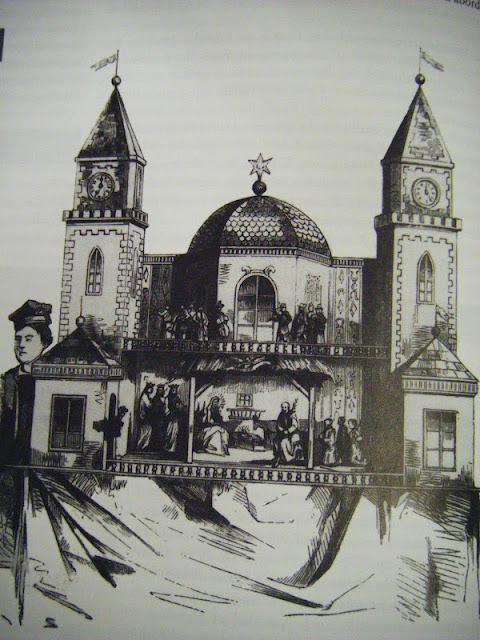 Freed from the rigor of ecclesiastical sobriety and the physical confines of the church the jaselka was changed in terms of material content and mobility. Enthusiasm for the performances was such that these were taken up by craftsmen and students who would use portable crèches to transport from village to village during their caroling ritual (kolednicy) between 26th December and 2 February.

Perhaps it could be said that it was during this period that the jaselka gave rise to the szopka – as the crib gave way to the shed construction that became ever-more elaborate. Whereas the initial Bethlehem crèche scene had been relatively modest (even when allowing for the puppet stage) this had been expanded to incorporate other aspects and elements. The set allowed for 3 levels – representing Heaven, Earth and Hell – all of which would be freely used especially in the demise of wicked characters, such as King Herod. Peripheral characters were now given space to perform on the puppet stage set as the original stable acquired a roof and an upper floor and then two church towers flanked the central construction. The key Biblical figures would open the performance, soon accompanied by characters such as Death and the Devil or heroes and beasts from Polish legends, folklore or local history. The Wawel Castle Dragon could find a voice next to Polish saints such as St Faustine or St Maximilien Kolbe, or noblemen such as Pan Twardowski, or rub shoulders with folk dancers, or vendors from Krakow’s Market Square. The scripts themselves tended to be freely improvised and were passed on orally, although some were later transcribed in the 19th century. 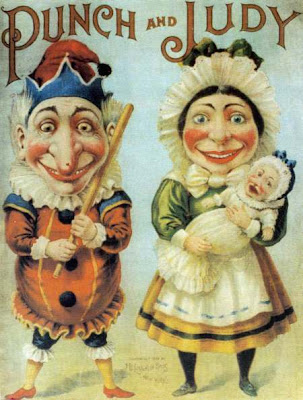 Like the original Punch and Judy performances or those of the French Guignol, the szopka puppets gave expression to themes that were of social and cultural concern, voiced in a satirical manner which offered a certain cover and protection and had a certain social role in the diffusion of ideas especially in periods of political unrest.
At this time the Krakow szopka came truly into its own, for although most regions had their own varieties it was there that the form reached the greatest level of sophistication. The Krakow szopka could take on such vast proportions that puppeteers manipulated the kukielka from below with rods or from above with strings.

The distinctive towers presented the Gothic tower of St Mary’s Basilica or the Renaissance-style dome of Wawel Cathedral and these finally gave the whole a castle-like form that developed even further over time. After the First World War the szopka was to evolve yet again - giving rise to a form that was no less impressive materially or aesthetically, on the contrary, but would lose its theatrical aspect as it largely abandoned the use of puppets. The Austrian occupying forces had banned the practice of door-to-door caroling with portable szopki due to the latent political content and when the country finally regained its independence in 1918 the socio-political mood had changed and had tempered the concept of the szopka performance.
In an attempt to revive the flagging interest in the szopka tradition of the city authorities decided to organize a szopka competition in 1937. Apart from the war years of 39-45, the competition grew in dimension and popularity over the decades to become the institution that it is today. The competition szopka has taken on its own distinctive character as form and construction have become increasingly complex and cultural references have become ever-richer. The traditional jaselka figures and other characters faithfully reappear each year, along with newer ‘guests’ such as Marie Curie, John Paul II or a perched eagle – symbol of the country itself. The former puppets have given way to immobile figures but the sets themselves now incorporate lighting, mechanized parts and other animated features that bring a modern breath of life into the szopka. None of this detracts from the magical fairy-tale quality of this art form of cultural expression. Complete with their shimmering, shiny surfaces, intricate detail and bright jewel tones the szopki recall the stained glass windows of their Gothic roots and continue to reflect the city itself. And finally ,just to finish, the tradition of jaselka performances – the living Nativity scene - is still treasured today, largely in schools while that of theatre puppetry was revived after 1956.

I wish I’d known all of this before seeing the exhibition here in France and certainly before actually going to Krakow and Warsaw many years ago! I did manage to visit Auschwitz, but that really is another story, and a very dark chapter in human history… 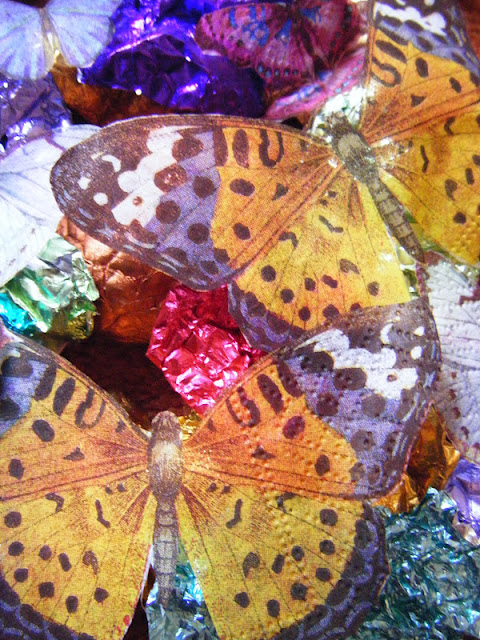