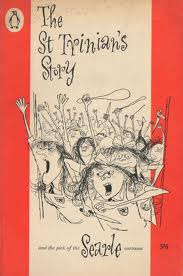 A thank you to Miss Simmonds for tagging me for a High School Playlist...
However, I do have to admit to a few things - the most important being the fact that I'm not exactly sure what period high school represents, but I assume it means the years leading up to 'O' Level exams, as they were known back then! 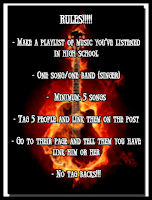 So I confess; firstly, as a dinosaur my 'high school' days date back to the later seventies and very early eighties; secondly and perhaps consequently, this is such a long time ago that the term 'high school' was rarely, if ever used except in American cults such as Happy Days and of course...... Grease; thirdly, I can't think of 5 people to tag for this because the last lot I tagged for their Seven Sins were otherwise occupied or were maybe above such things anyway; fourthly I couldn't limit myself to just 5 songs so I increased it to make up for the 5 people I won't be tagging! So here we go - although not necessarily in any correct chronological order.
As I was saying, the notion of high school was a weird amalgam of images revolving around bobby socks, boob tubes (Olivia Newton John style), bubble gum, bangs (alias a fringe), orthodontic braces (I did eventually get a much-needed one) and the Brady Bunch. High school definitely seemed to be an exotic American concept that was very far removed from our class of hybrid English roses from the all-girl grammar school, who, despite uniforms, socks and scraped-back hair bore little ressemblance to Britney Spears... St Trinian's, of the vintage late 1950's variety, does spring to mind even if we never had to actually wear a gymslip or hat.
Nevertheless, we did live through the Grease years first hand, though I don't think I really 'got' any of it at the time. Being about thirteen then must have been the equivalent to being about eight years old today, with even less pocket money, street credibility and wisdom, certainly in my case at least. All this was in the days before any mod-cons (videos/DVDs/CDs - YouTube) so it was really something to actually possess a copy of the (vinyl, of course) album. Somehow we did manage to follow the official clips with great devotion on Top of the Pops and religiously track the progression of the records on Sunday night's Top 4O on Radio 1! It makes me laugh to listen to the lyrics now, especially the ones to Look at me.... because I hadn't really got a grip on what virginity actually was. This was only two years after some street-wise girl asked me (fresh in from the country) whether I was "still a virgin" and I just couldn't work out at which point I was supposed to have actually started sharing a similarity with Jesus' mother. No, sadly I'm not making this up; my only knowledge of such terms was from hymns and Christmas carols (... "the Virgin's womb" and such like...). In the end I decided it was a safer bet to strongly deny being a 'Virgin'; I don't think she believed me! 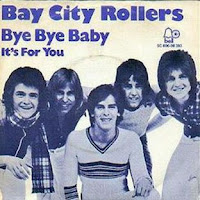 The result of watching Grease was that I was desperate to have a girlie 'sleep-over' (and sadly never did have one) and also pined for a baby-doll nightie (this I sadly did obtain). Some time before my Grease period I had a best friend who lived 'up country', well, actually in one of the nearest big towns in the county which wasn't so far away, but I had to get a train (alone!!) to get there. This girl was very pretty and incredibly 'with it' and went to a big comprehensive school, complete with boys, who needlessly to say, found her irresistible. She took me to a disco, and tried to teach me a few basic steps that TOTPs hadn't. This was when Bay City Rollers were still comparatively hot and my friend actually had a pair of the compulsory flared trousers with various scraps of tartan - the ultimate touch of cool. I don't think I really passed the test on any front and remember her face when she later enquired if I happened to know any girls who'd "got in the club" (ie pregnant). I asked what club she was talking about, thinking that whatever the club was, it had to be really cool....and that I ought to be in it.
Fast forward a few years and out came the single from Squeeze, 'Up the Junction' whose lyrics are quite moving in fact.
Go on a little further in time and there was a similar theme in another of my favourite songs - The Specials 'Too Much, Too Young' - a statement that could never have been applied to me.
The first real teenage record I acquired was Jilted John's 'Gordon is a Moron' whose novelty feature was the relatively daring use of 'rude' words on the BBC, and the funny dancing, of course...
The name Gordon reminds me of another great track a few years later by XTC - Making Plans for Nigel. This makes me think of a choice specimen of a Nigel who I used to observe in the church choir when I accompanied my friend to Sunday morning Mass. The observation was not out of admiration because he had certainly not been blessed in the physique department but because he was in among the other boys dutifully singing away (we were at an all-girls school so boys were obviously thin on the ground). We would try to catch the attention of the more palatable males while the offended and offensive Nigel would make most un-Catholic gestures at us when the priest wasn't looking!
Despite her relatively strict Catholic education my friend actually read NME (how sophisicated did that seem!), listened to Radio Caroline and generally seemed to be in know of all things trendy and introduced us others to such things in due course - a pattern of affairs she kept up for years. She was a big fan of the Boomtown Rats and I followed suit - severely lacking any capacity for such innovation myself. Nevertheless I can still rattle off all the lyrics to 'Rat Trap'...
If all else failed, we could always resort to parents' records if we thought it worthwhile - good taste not necessarily being one of the criteria. 'Werewolves of London' by Warren Zevon used to be brought out regularly from my parents' collection. The lyrics are so whacky...
My first choice of real album - 'The Kick Inside' by Kate Bush - was and still is of remarkably good taste and I play it now - preferably on my record player (replica) which faithfully picks up all the scratchy bits so that my ears anticipate the old jolts on the vinyl.

Just after I bought the album with my carefully-saved summer job money all those years ago it got warped in the sunlight, yet always managed to play (wouldn't really like to comment on the resistance of temperamental CDs). I thought Kate Bush's Wuthering Heights was magical, and have treasured her music ever since. We used to listen to all the tracks and marvel...especially at this one, Moving, with the whales' songs in the intro.

Another great female singer was Lene Lovich - my favourite was 'Bird Song'.
A little later I discovered Peter Gabriel with Solsbury Hill, and seemed to work my ways backwards from there as I came across his work with the old Genesis line-up. I loved the real weird, whacky lyrics, make-up and costumes...
In spite of lots of great music, being 16 years old was no fun - and I have a whole host of depressing memories based on nothing particularly substantial or specific, just teenage fog, mist and misery and would not wish to sample 'Sweet Sixteen' again. The year was hideous on all counts, but I did manage to get the necessary 'O' Levels and life after that was great! Funnily enough, in that last year of 'O' Levels the grammar school system (segregated sexes) was scrapped, but our classes still didn't get to share lessons with the boys!
I did vow dramatically at that age that my life's ambition was to live in France. I'd already been severely linguistically challenged by Plastic Bertrand's 'Ca plane pour Moi' (and still can't sing along to it) and then won over by Visage's 'Fade to Grey'.
So listening to Fade to Grey takes me right back to that period and then leads, logically, onto my final song - from Talking Heads - 'Once in a Lifetime' which in turn leads me to the present time with a few questions I may well ask myself....