Marionnette festival at Charleville-Mézières... Feast for the eyes!

Back in September we went to feast our eyes on the world capital in the art of puppetry – Charleville-Mézières. Only a short train ride away, Charleville is situated in the Ardennes département, in the Champagne-Ardenne region, approximately 2 hours north-east of Paris. 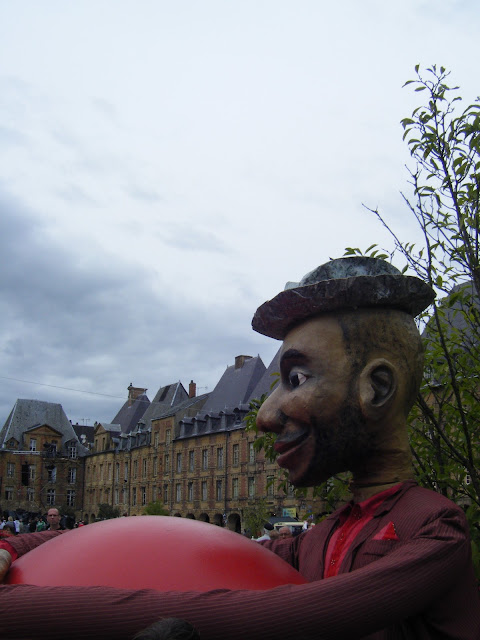 In fact the present-day town is composed of the two former communes, Charleville and, of course Mézières which were merged in 1966. 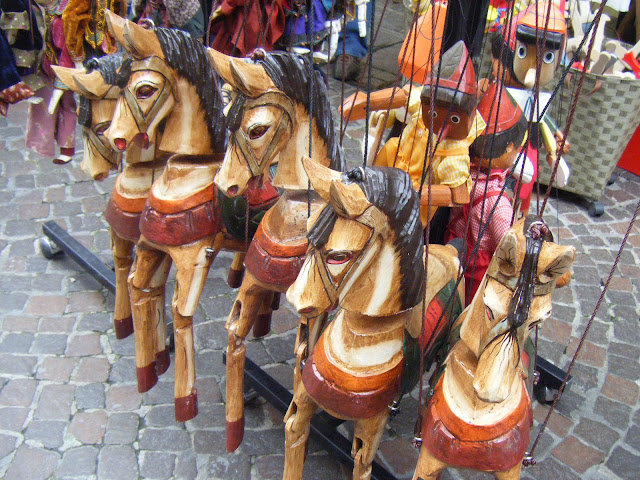 Entering the town we weren’t entirely sure which way to turn – there seemed to be activity in the form of stalls, stands and people everywhere, hardly surprising since around 150,000 visitors come to the festival which takes place in the latter half of September, over 10days (and two weekends). 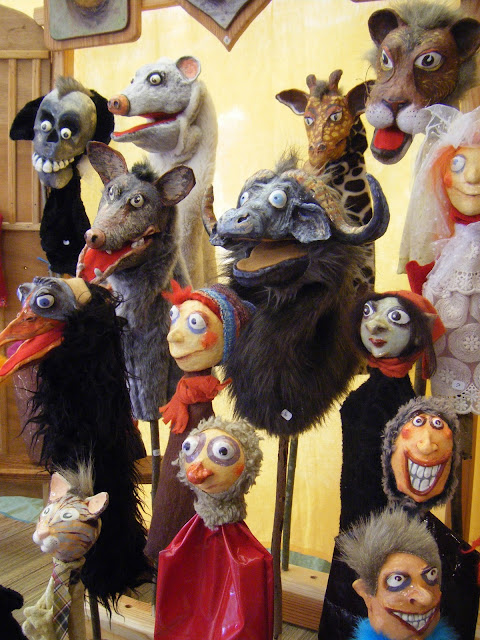 And then, naturally, there are all the companies presenting – 132 in all – from countries all over the world. It’s not given the title of Festival Mondial des Théâtres de Marionnettes for nothing !

Not only that, but the public, performers and puppets alike have to wait two years for the following festival since these only take place on a biennial basis (before it was once every three years). However, the year 2011 was particularly eagerly awaited since it commemorated the 50th anniversary of this great festival. 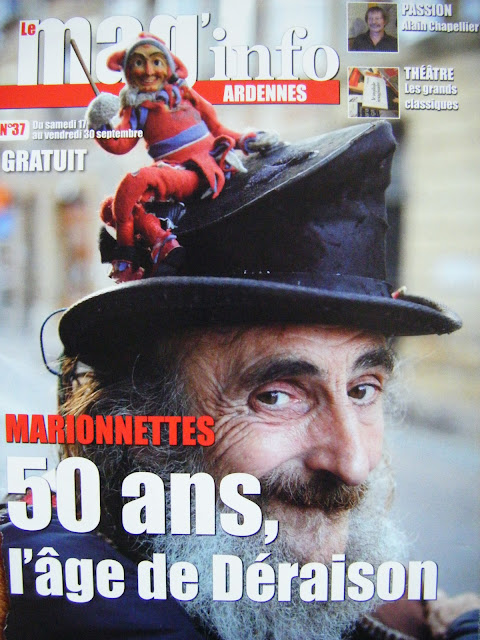 Nearing the town centre we came across the imposing figure of Charles de Gonzague who, in 1606, decided to make a new capital in the romano-germanic empire, one which would therefore be free from the taxation system of the French kingdom. Charles summoned the architect Clément Métezeau (brother of the renowned Louis, of Place des Vosges, Paris, fame…) to create a grand square to reflect the importance of the town.


The Place Ducale is indeed an impressive site, recalling its Parisian predecessor and as Charles looks down on us from his pedestal, his chest seems to swell with pride, a little like a majestic marionette himself!

During the frenetic activity of the festival period thePlace houses numerous puppets stands and platforms – going from the more traditional castelet, (reminiscent of Punch and Judy shows for the English and Guignol for the French) to more modern structures.

Although the Place thrums with spectators and spectacles these are not just limited to this part of town.


Indeed, the shows spread out throughout the whole town, tracing the grid pattern lay-out (hippodamier) that Charles had drawn up centuries before, though surely not with a puppet festival in mind.

The colours associated with Charleville-Mézières with its blue slates, yellowish masonry and red bricks and represented in the carolomacérienne banner.

The colourful backcloth of the twon meets competition in the vivid multi-colour displays that brighten up the town during this multi-cultural festival. 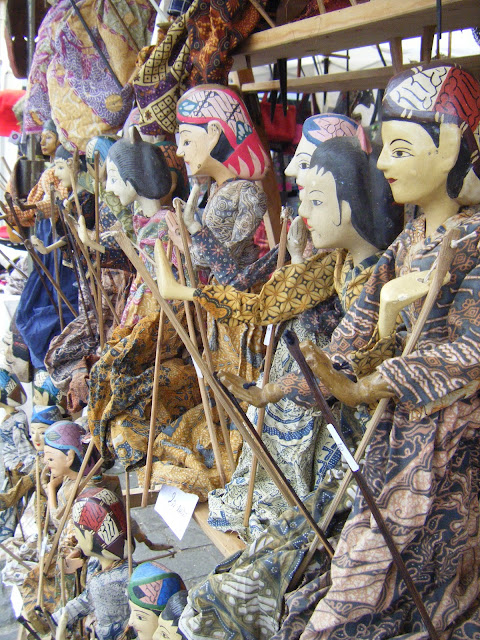 Today the most imposing figure of Charleville-Mézières, Charles de Gonzague notwithstanding, is to be found near the Place Ducale…


The Grand Marionnettiste presides over the Place Winston Churchill, and has been looking down onto spectators from the large clock on the façade of the Institut de la Marionnette since 1991. In this manner we have the impression that the Great Puppeteer is guiding or orchestrating time itself; the twelve hours of each day and night and the twelve months of each year...
Throughout the day, on the hour, the 10 metre automation reveals scenes based on 12 tableaux which are taken from a medieval saga of the Ardennes, the Four Sons of Aymon.

The Grand Marionnettiste draws our attention to the fact that Charleville-Mézières is not only the stage for the international festival....


Indeed, the town is also home to a unique establishment of higher education, devoted to the art of puppetry - the Ecole Supérieure Nationale des Arts de la Marionnette (L’ESNAM). 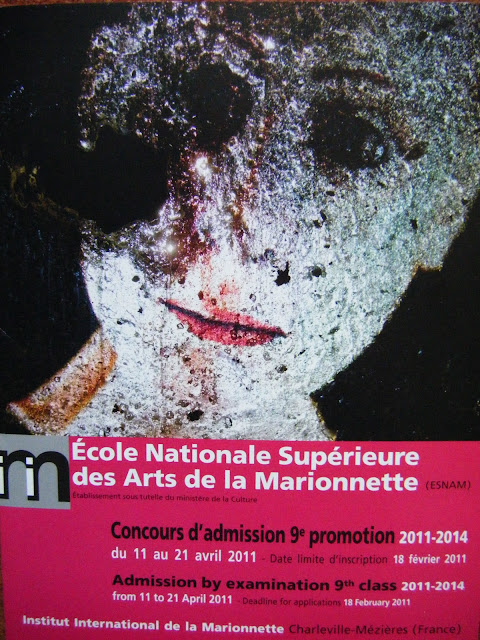 Every three years 15 international students are taken on to study, train, create and explore all elements of the world of the marionnette for three years intensive study. 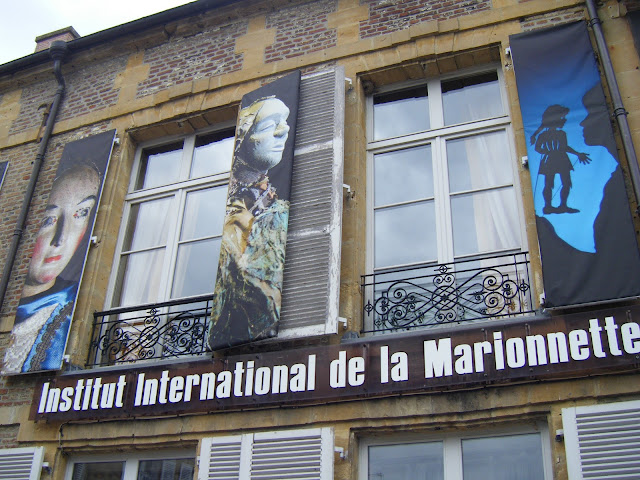 Whilst the first students of the school tended to concentrate on the plastic art aspect of their studies, today’s students are fully involved in every dimension in a training technique which is called the ‘cinq doigts de la main’; theatre, manipulation of puppets, voice, body and construction.
The town also has the above-mentioned Institut de la Marionnette - principally a resource centre for the world of puppetry- but is also the heart of other vital associations and activities relative to this specific field. 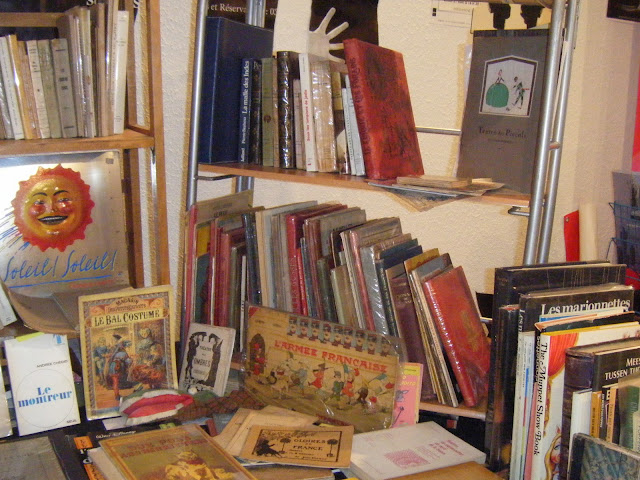 The AVIAMA (Association des Villes Amies de la Marionnette) is an international network which unites all the towns and cities which promote and develop the world of puppetry. 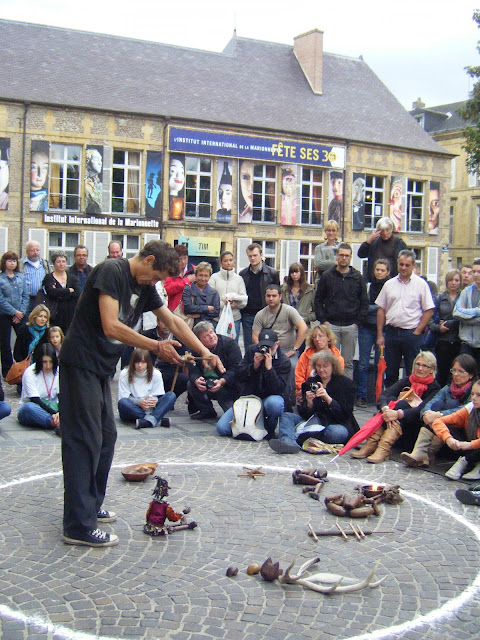 The association AVIAMA seeks to defend the art, and its performers; to set up partnerships between various establishments – schools, companies, museums and festivals – and finally to fully promote each of the member cities on an international dimension. And there are certainly many towns and cities! 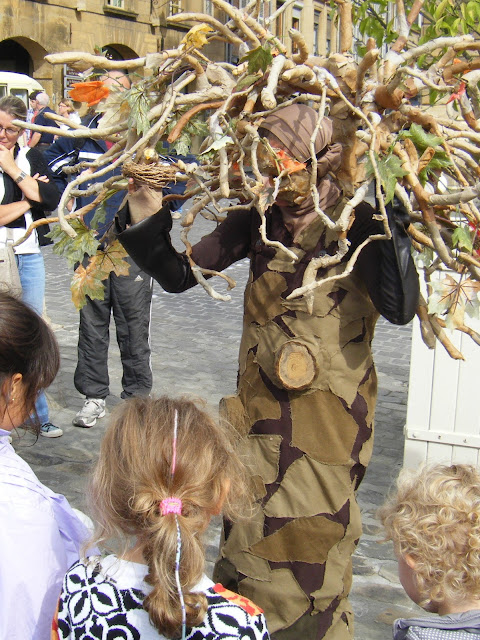 So why is Charleville-Mézières the capital of this ever-growing empire of marionnettes? It all started by a chance meeting of two individuals which would act as a catalyst to a creative spirit still evolving today. Jacques Félix, an inhabitant of Charleville (not yet Charleville-Mézières) met Géo Condé (1891-1980) as a teenager in 1941, in the city of Nancy. Condé was already an established painter, sculptor, musician, writer, but above all a marionnettiste and he transmitted his love of puppetry to the young Jacques Félix.

This theatrical art form was especially attractive during these difficult war years which otherwise offered little entertainment to children and young adults alike. Indeed, Jacques was a scout, but as this activity had been banned by the Nazis he sought other diversions. 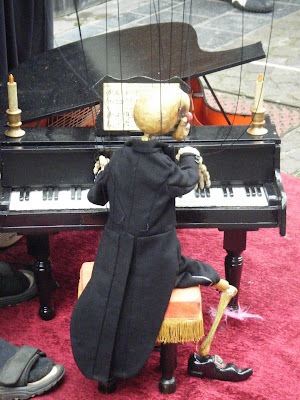 Puppetry proved to be a perfect outlet for the frustrations of the period and was a source of enjoyment for young and old. More than than, the marionnettes enabled their puppeteers to voice opinions and ideas that would normally be silenced under enemy rule. In this manner these early marionnettes en chiffon– made of wool and scrap material – relate back to their ancestors – with Mourguet’s Guignol informing the public of the social issues of the day.

You can read up about Guignol and his creator on the following page:

Félix and Condé set up the the company Petits Comédiens de Chiffons in 1945 and devoted themselves to creating shows and travelling all over France. One of their shows was Les Quatre Fils d’Aymon, shown in 1954, the same theme that can be seen presented on the Great Clock on the Institut de la Marionnette.
When Félix returned definitively to his native Charleville he brought back his passion for puppets and developed the idea of a festival that would take place in his home town. After its foundation he then worked on the Union Internationale de la Marionnette of which he was president from 1976-1991. 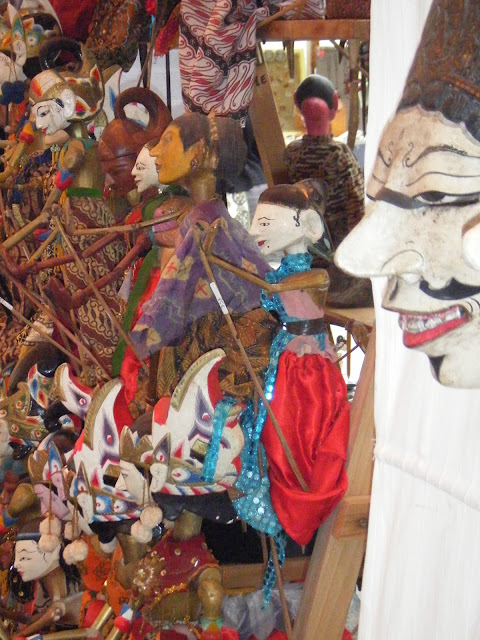 Marionnettes are no longer seen purely as children’s entertainment, or a childish, naïve art form; their art goes far beyond this aspect but incorporates these elements too. The world of the marionnette offers a huge diversity of creativity and theatricality and not least in the variety of the puppet itself.


At Charleville-Mézières there are both street performances and ‘proper’ shows in the theatres, all presenting diverse puppets – stringed, glove, shadow, body. The puppets may be speaking, or communicating solely by mime and gesture, nevertheless they all bring their audiences together, audiences composed of many age groups and therefore many levels of interpretation and comprehension. So here we have an opportunity for global humanization through international marionnettes rather than widespread de-humanization through the ill-effects of globalization!
Here's a link to see a marionette scene from the film Being John Malkovich. The film itself questions the whole notion of being - who's pulling our strings and the power of a great puppeteer - totally whacky and great to watch!

The next rendez-vous is on the 20-29 September 2013 - Charleville-Mézières!
To which a certain English puppet personage would certainly respond - Oh no it isn’t! -
Oh yes it is!!!! 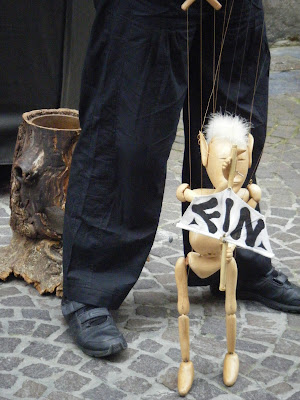