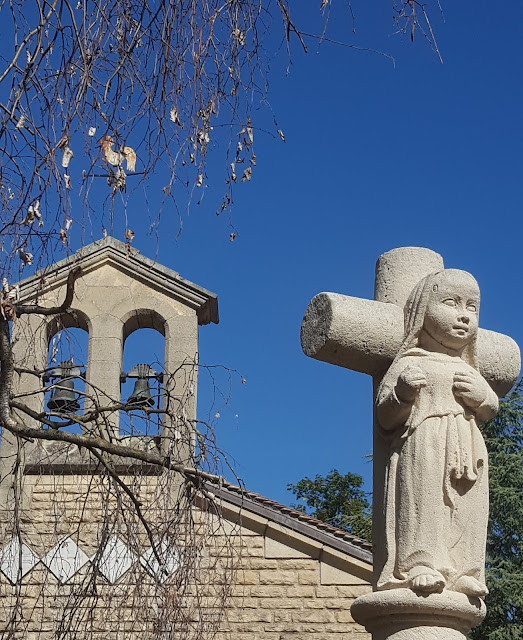 I finally managed to visit La Chapelle Foujita, Reims, before its closure for the year. What a beautiful, bright day it was, both inside and outside this remarkable little edifice, whose decoration was the last project of the Japanese-born artist Tsuguharu Foujita (1886-1968) who spent a large part of his life in the country of his adoption, France. 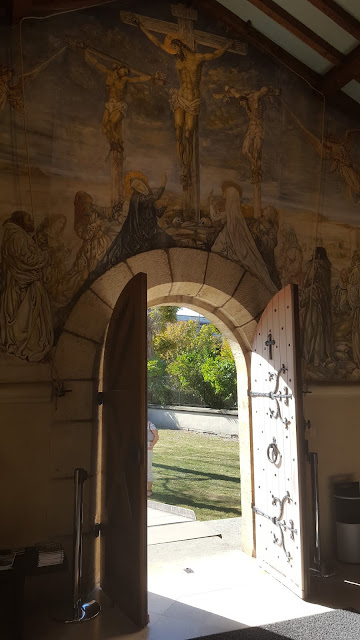 The chapel, known as Notre Dame de la Paix, was a symbol of his conversion to the Catholic faith and a reference to the message of Peace on Earth issued by Pope John XXIII in 1963, with its emphasis on human dignity and equality.

The Romanesque architectural style of the chapel reflects the desire of the artist to recreate an evocative atmosphere of purity and tranquility, whilst allowing Foujita to express the Christianity that was central to his life in later years. Indeed, following a final trip to Japan in the late 1950s, he experienced a mystical enlightenment in the Basilique Saint-Remi in Reims and was baptised at the Cathédrale Notre-Dame there in 1959, some 60 years ago. 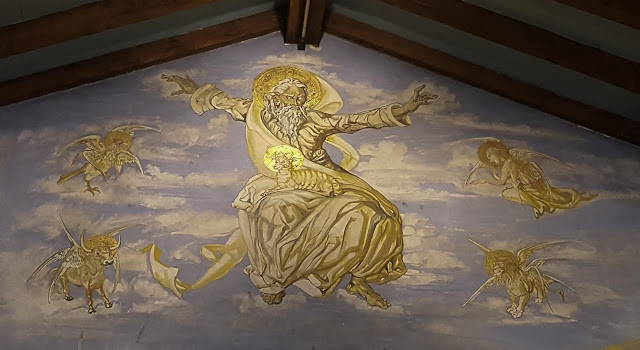 He had already obtained dual nationality in 1955 and his art came to symbolise the meeting of Orient and Occident. Spiritual themes are explored throughout the little chapel, with vast mural paintings and stained glass windows depicting scenes from the life of Christ. 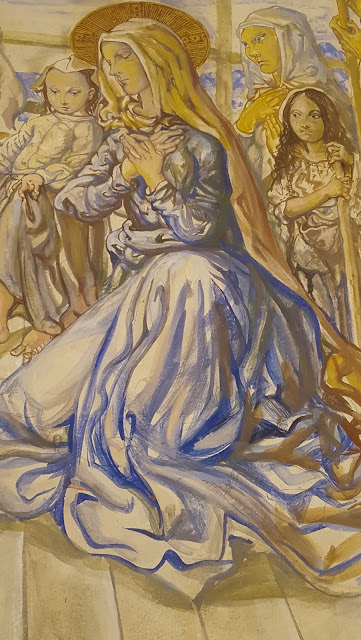 "I built this chapel to atone for 80 years of sin" declared Foujita – who took on the name Leonard at his conversion, in honour of Da Vinci and a Japanese Jesuit martyr, Léonard Kimura. 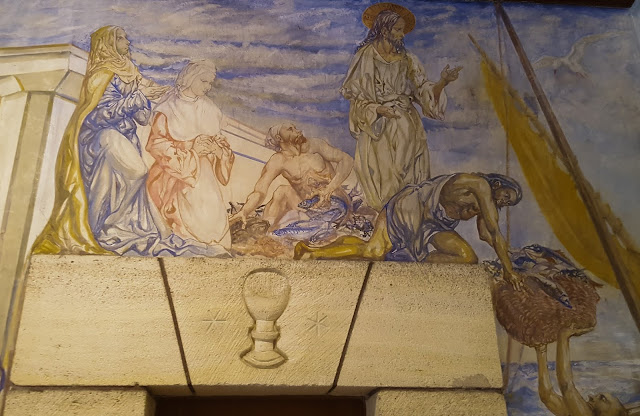 Yet beyond the expression of faith and penance, I would say that this sacred place indeed seems to be above all a testiment to his own love of Life and all its living forms, from the spiritual to the most profane. 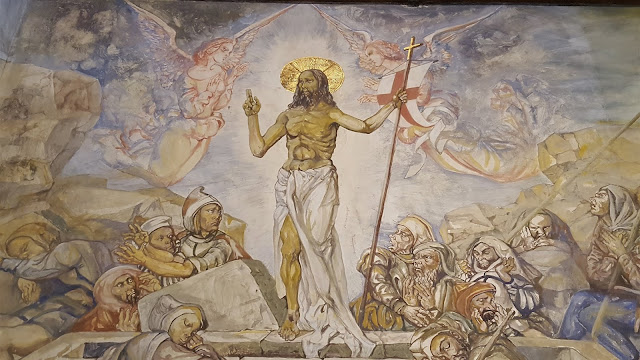 The last years of Foujita’s life were spent in the rural setting of Villiers-le-Bâcle, where a ruined country house was carefully transformed to become home and workshop. Designed to his own specific plans, the house allowed Foujita to devote all his time to his final work – the vast preparation of the chapel. 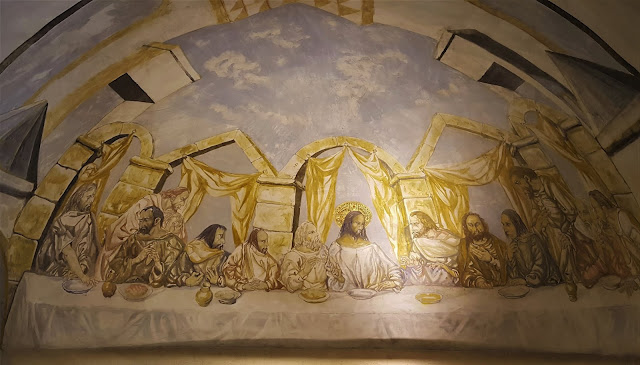 Far from cloistering himself away in cold, austere surroundings, however, in this deeply spiritual period of his life, Foujita seemed to have taken as much pleasure and inspiration from aesthetics as he ever did. His home, now the Maison-Atelier Foujita (awarded the title Maison des Illustres in 2011), is decorated with a wide collection of artifacts and art that were lovingly picked up during his travels, or designed and fashioned by himself. 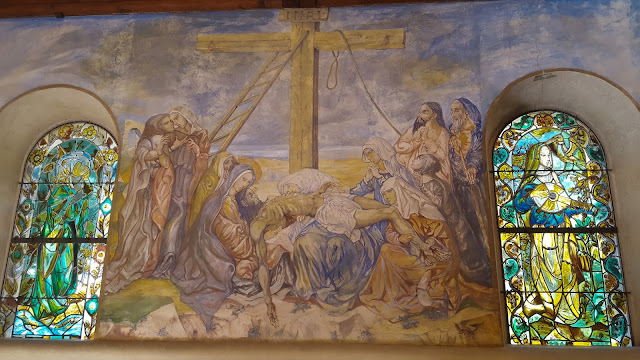 These were not selected for any specific monetary value, but were dear to him, satisfying and stimulating the artist’s eye and hand. Thus, furniture, furnishing, crockery, curtains were all confected by this keen craftsman, and found their place next to the eclectic objects and oddities that had caught his eye, such as the door to a Spanish monastery or a Peruvian jar… 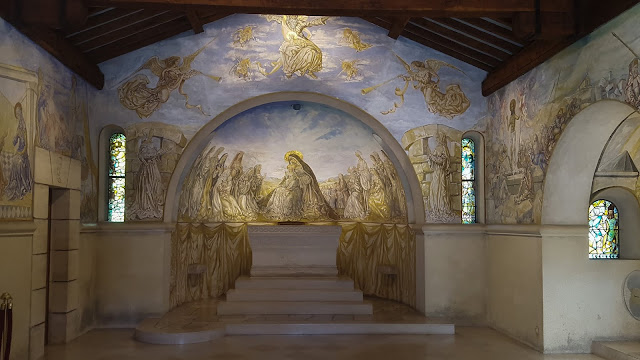 As a unrepentant magpie, I find this quality admirable and endearing especially in today’s climate wherein pleasingly aesthetic treasures tend to be dismissed as pointless clutter, so that many homes today resemble bland showrooms for Ikea. Worse still, magpies are made to feel guilty or inferior for their desire to covet and collect… 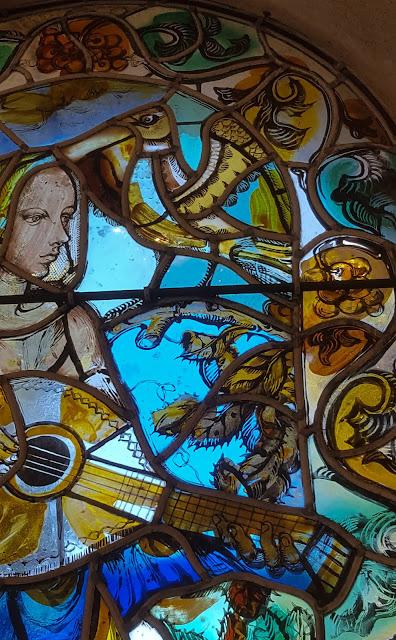 Already admired for the multi-facetted nature of his talent since the early Parisian years of Les Années Folles, Foujita continued to apply his far-reaching magical artistic and aesthetic touch up to the very end of his life. Referred to as ‘the Lewis Carroll’ of painting by Jean Cocteau, Foujita had been an important figure in the avant-garde art movement, the Ecole de Paris, in 1920s Montparnasse, yet had not limited himself to merely drawing and painting. 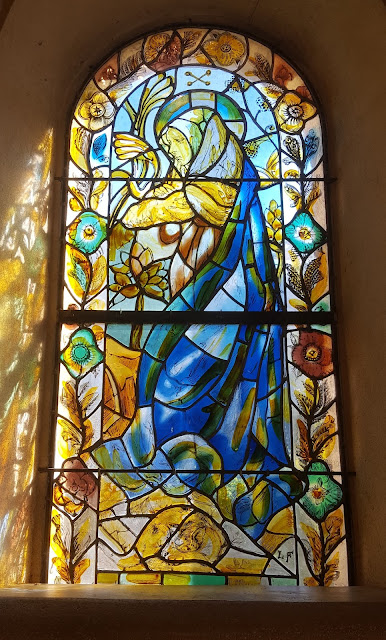 Indeed, throughout his life, Foujita continually turned his attention to an array of different activities; engraving, book illustration, sculpture, ceramics, photography, fashion design and the cinema. His very appearance was an art form in itself and his unique style of clothing and grooming made him a highly distinctive, influential figure. The round glasses, earrings, moustache, basin haircut and eye-catching sense of dress left its mark on the café society that artists and writers frequented in the between-war years. 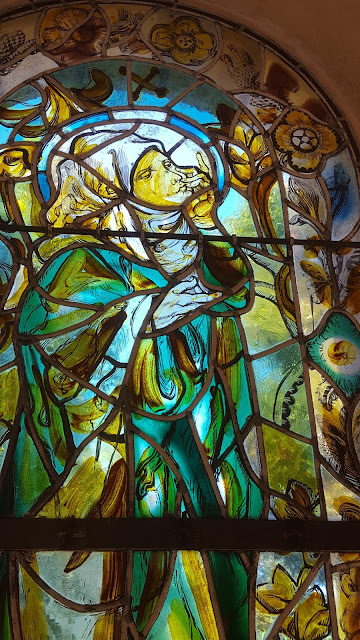 Women were instinctively drawn by his feline grâce, Asian reserve and a certain dandified sophisitication. The name Foujita is often associated with the artists’ model and muse, Kiki de Montparnasse and naturally with the many studies of nude female forms for which he become famous due to the opalescent luminosity of his depiction of feminine flesh. 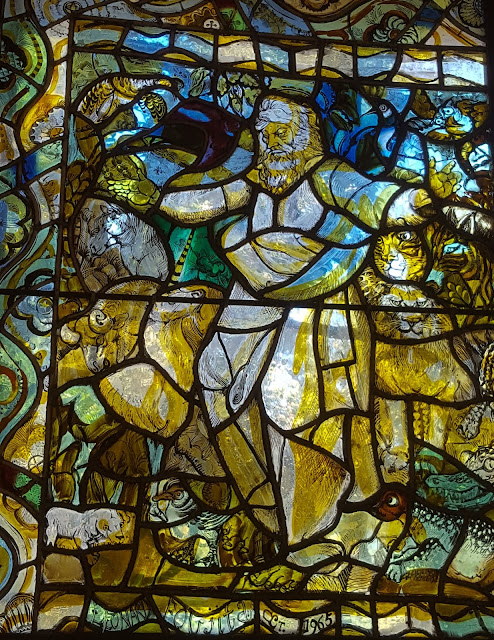 Nevertheless, his work on cats is also highly valued for its expressiveness and fluidity of the draughtsmanship that convey the softness of feline fur and form. His innate ability to use the rigour and discipline of traditional Japanese linework in drawing and painting was combined with the fluidity and freedom of the Western artists from whom he drew inspiration. 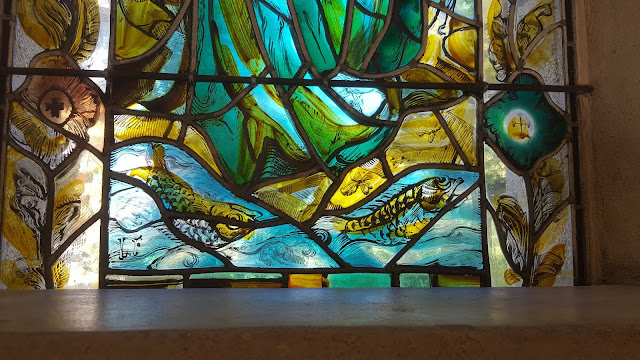 Such influences spanned the centuries – from the great Classicist masters such as his name-sake Leonardo da Vinci to contemporaries like Matisse, Picasso or Modigliani or those much further-afield such as the Mexican muralist, Diego Rivera. 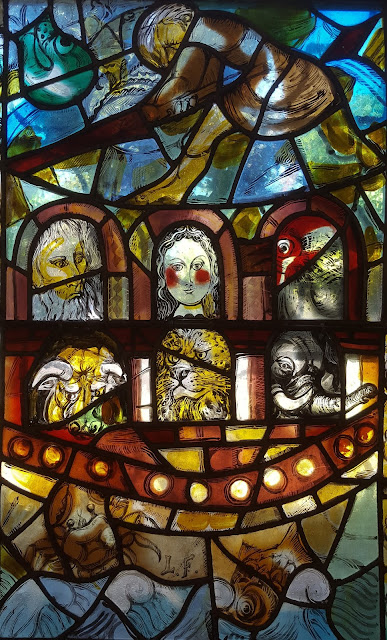 In fact, the chameleon quality of the franco-japanese artist is observed in the extensive body of his work, all of which bears the imprint of the multitude of influences left from his travels, studies and encounters. One constant however, remains Foujita’s love of cats. 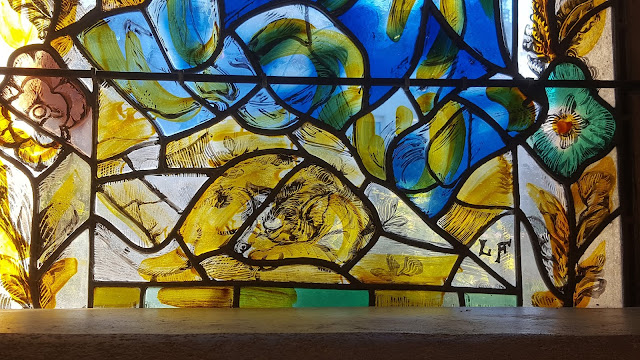 Feline forms appear in his work and life, either as detail or main subject, in paintings, drawings, photos and even as a tattoo on his fore-arm. I don’t know if this feline fascination is a particular Japanese trait, as the present-day author Haruki Murakami shares a similar love. Admiration of cats is certainly nothing new in French art and literature – the lives and works of Art Nouveau painter and printer Théophile Steinlen (1859 – 1923) and poet Charles Baudelaire (1821-1867) famously reflect this… 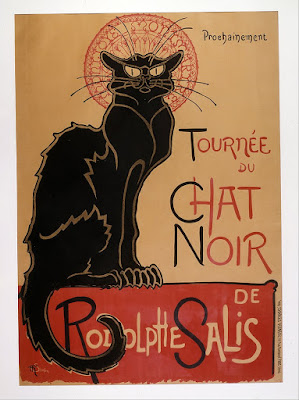 Miké, the stray tabby cat with a protuding canine that Foujita is said to have found around the Parc Montsouris, appeared in numerous self-portrait paintings and photos. For Foujita, this cat as all felines, artfully combined the qualities (often contradictory) that Foujita admired and ultimately embodied himself; fussy and fastidious in grooming yet resistant in hardship, fierce but gentle, both wild and tame, haughty yet warm, approachable yet unattainable at the same time.

He also observed many of these same traits in the females that occupied his life and art and noted that they displayed the same fascinating tendency for duplicity. "I believe that felines were given to Man so that he could learn through them how to behave with women". One of his most famous works is the Bataille de Chats from 1940, that is an allegory of war itself, painted just before Foujita was obliged to return to Japan.

Here in the Chapelle Foujta, the frescos, stained glass and ironwork all focus primarily on scenes from the Bible. References are also made to Kimiyo Foujita, his wife, who is now buried next to Foujita in their final resting place; the chapel itself. 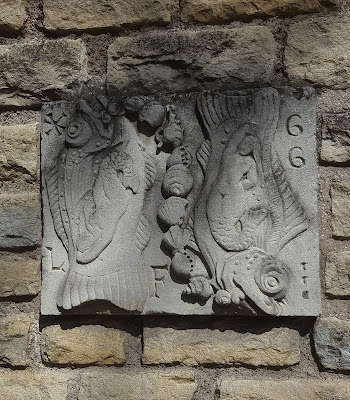 The mermaid plaque at the entrance of the building honours her, and she also figures in a portrait in a fresco scene. 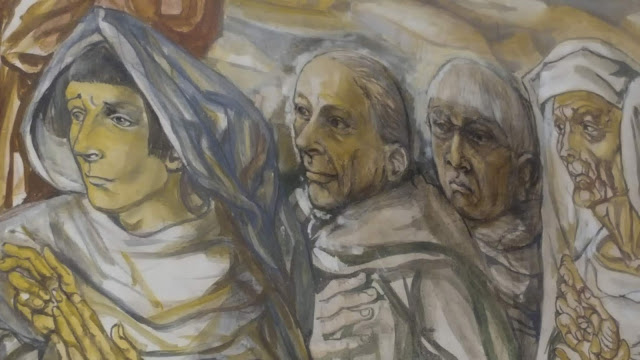 Foujita himself is also presented, as was the commissioner of the work, René Lalou, President of the champagne house Mumm. 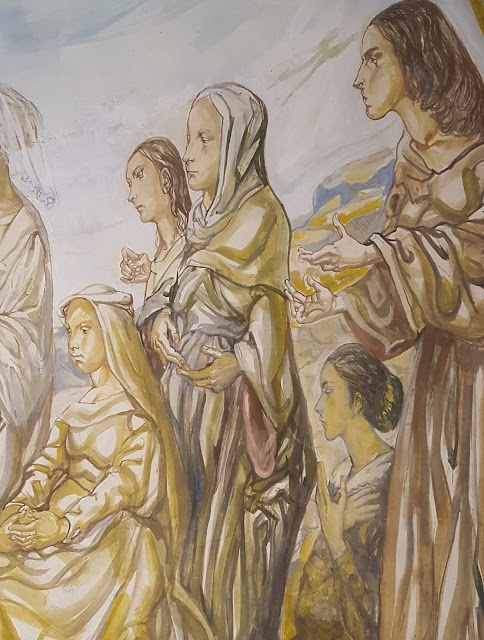 The cathedral of Reims, basilica of St Remi and the surrounding vineyards of the Champagne region are also featured. 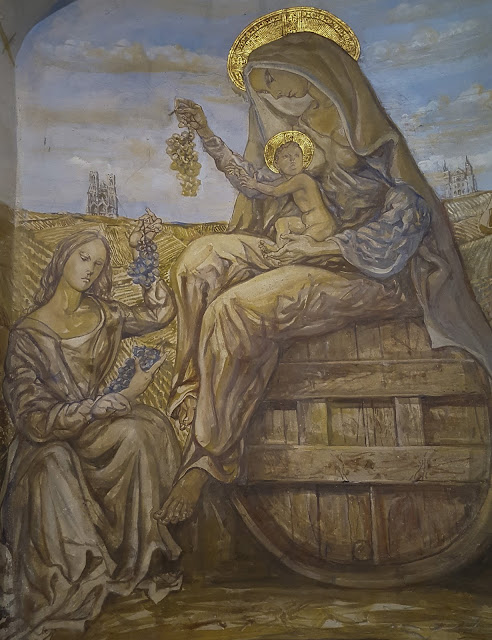 Throughout the chapel, each decoration – be it mural or window – bears some reference to nature in small but significant detail. Beyond floral decoration, insects, butterflies, fish, warm-blooded animals of all types emerge from the vast surfaces and the smallest too... 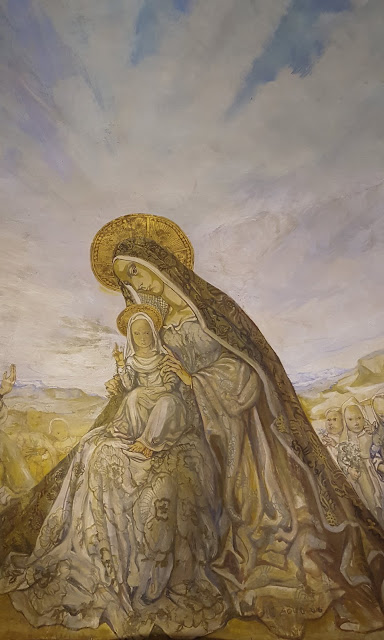 Foujita may have devoted his last years to his reverence of Mary, his spiritual beliefs did not exclude the other keystones to his existence, and they actually appear to have embraced these too. Even the small mouse encountered during the painting process and subsequently fed by the artist, appears on a fresco! 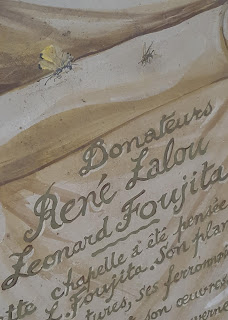 The decoration of the chapel was finished remarkably quickly – within two months after the completion of the building itself – with Foujita himself climbing the scaffolding in order to paint his frescos on an area of almost 200 m2. This was no mean feat since he was already advanced in years (80 years old) and would die less than two years later in 1968. 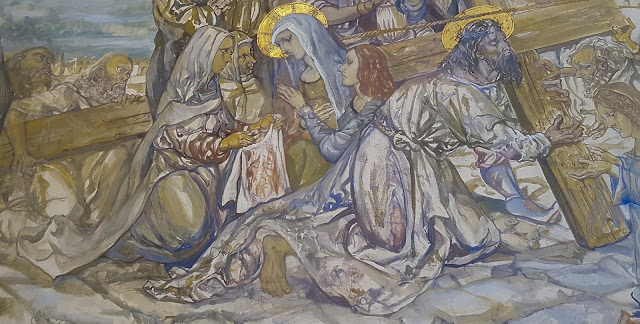 Once started, a mural study would have to be finished that same day which meant that execution of the work allowed for little error or hesitation and demanded deft, light work. The chapel radiates love, light, warmth – even more so when the sun illuminates the natural brightness and colours of the murals and its rays shine through the stained glass, casting beautiful jewel-like colours on the wall and floors. 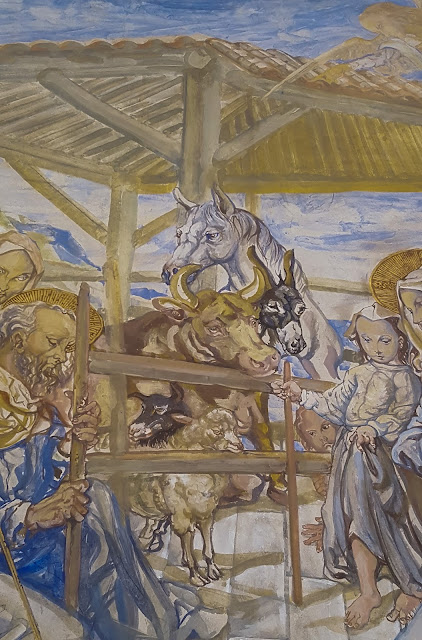 The people studied are alive with emotion and movement – with expressions and hand gestures that seem inspired by the elongated forms of Mannerism, for example. The eastern-looking eyes however, are unique to Foujita as is the will to include the collection of creatures that look out at us… 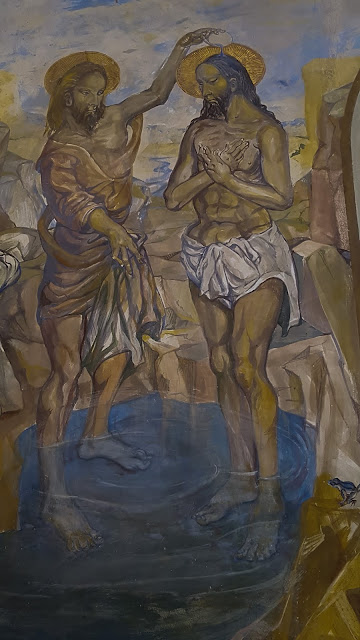 This again, is one of the aspects that I probably appreciate the most about Foujita – the fact that any admiration of the animal kingdom does not need to be explained or somehow apologized for. The love of cats, or any other beast, does not make us any less human ; it makes us more humane. Love for life on Earth does not detract from spirituality – in Foujita’s work it is part of its expression. 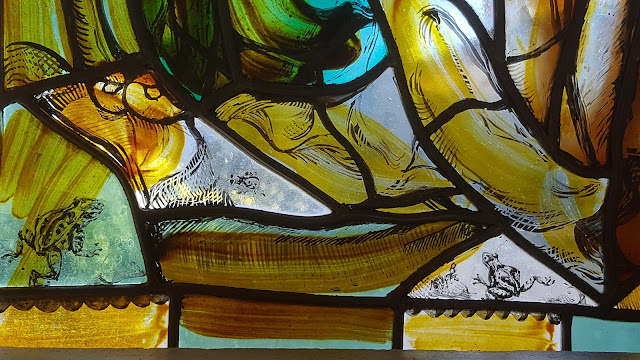