A Blessing of Unicorns... 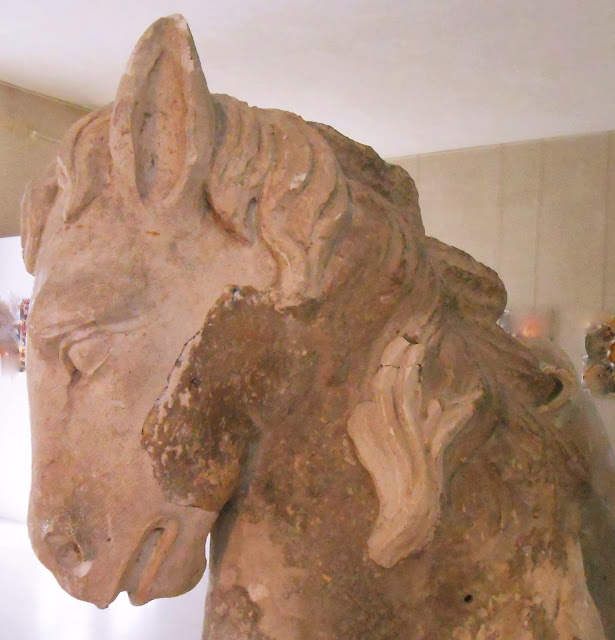 The month has run out on me, so no time to write anything to accompany these beautiful, beguiling beasts - the mythical unicorn - symbol of purity, incarnation of Christ. Or so the legends go.
This fine specimen is in the Palais du Tau in Reims, the Palace of the Archbishop, in which the kings of France resided before their coronation in the cathedral Notre-Dame de Reims. 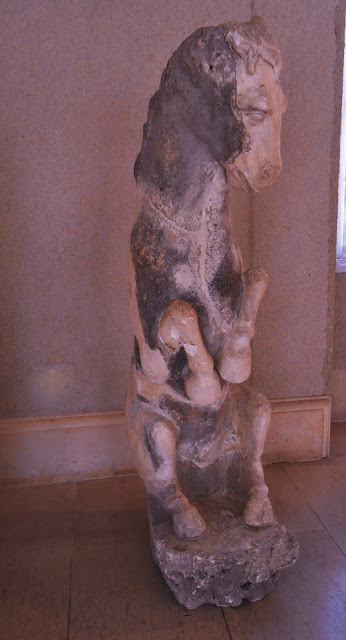 In fact, the sculpture dates from the 19th century, part of Eugène Viollet-le-Duc's restoration project of Medieval buildings and is set alongside the customary lion figure. The relationship between these two noble creatures has been highlighted in many myths, the most famous of which is surely the Lady and the Unicorn in the Musée de Cluny (Paris). The unicorn here in the Palais du Tau no longer has its spiralling horn but assumes the standard 'begging-dog' position. As for the regal lion, he seemed more mealy-mouthed than majestic, but nevermind! 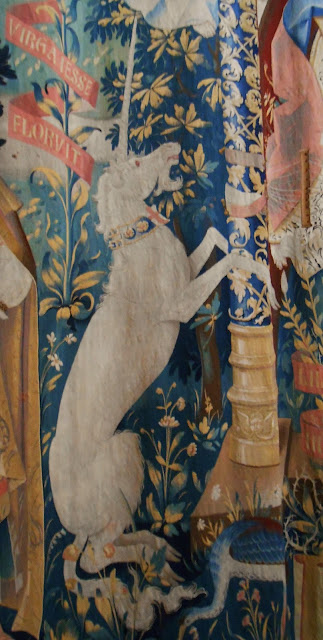 The vast tapestries that cover the walls of the Palais du Tau are from the 16th century. These are full of intricate detail with symbolic meaning that is largely lost on us today, but are well worth discovering. Although we probably cannot really relate to the piety of the menfolk, the quirky expressions of even the humblest of the animals displayed are still revelant today. None of us have had the privilege of actually seeing a 'blessing' of unicorns, but how magical is that term of venery? That led me to look up other, equally unusual terms for animal groupings and I was not disappointed:

A pitying of turtle doves, a phalanx of storks, a parliament of rooks, a wisdom of wombats, a scream of swifts, a scurry of squirrels, a scourge of mosquitoes, a cackle of hyenas, a convocation of eagles, a crash of rhinoceroses, a charm of magpies, a kit of pigeons, a lamentation of swans, a scold of jays, a skulk of foxes, a shrewdness of apes, a flight of swallows, a flamboyance of flamingoes, an army of frogs, a murmuration of starlings, a sloth of bears, a mess of iguanas, an unkindness of ravens, a gaze of raccoons, a bellowing of bullfinches, a bouquet of pheasants, a barrel of monkeys, a labour of moles, an ostentation of peacocks, a pandemonium of parrots, a puddling of mallards, a pounce of cats, a fluther of jellyfish, a bloat of hippopotamuses, a business of ferrets....
and the list goes on....