The Paintings of Jean Marrel...Nature in Art, Art in Nature... 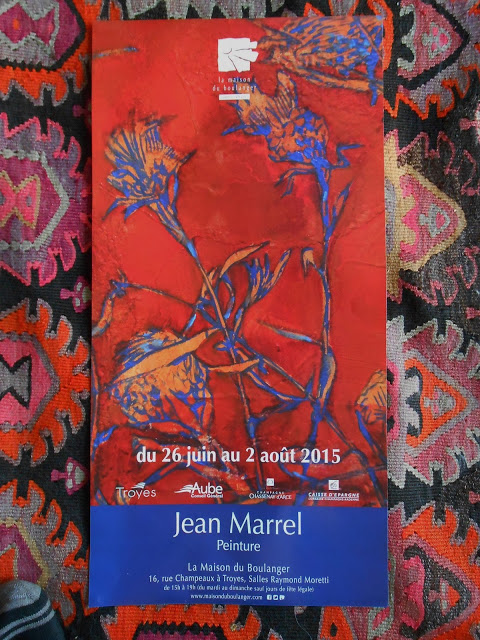 While visiting the town of Troyes in the Champagne-Ardenne region at the beginning of July, I noticed a poster for an art exhibition that literally made me stop dead in my tracks. I often see things that make me pause, but the total stand-still moments are a little rarer. The vivid colours and evocative forms in the poster reproduction of the plant painting caught my attention straight away. 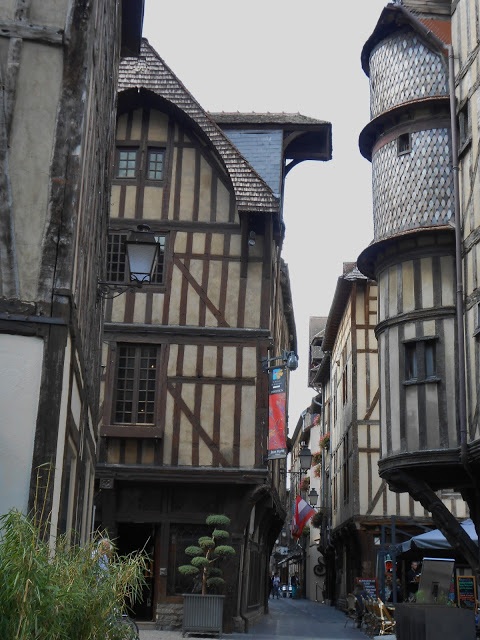 I was very pleased to see that the exhibition was still being held at the Maison du Boulanger, one of the many Medieval buildings in the heart of the old town. Unfortunately, the opening hours being incompatible with my timetable, I wasn’t able to see the amazing work of the artist in question; Jean Marrel. 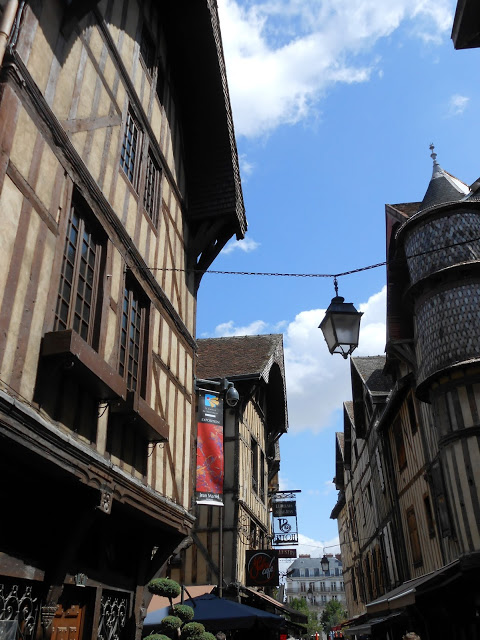 To say that I was disappointed is an understatement, but I vowed there and then that I would come back before the end of the month just before the final days of the exhibition… That project lost a little momentum as I went back to England, but then I resolved to return to Troyes as soon as I got back to Reims. And indeed, this was a trip that I certainly did not regret, despite a wait of 6 hours for the exhibition opening (3pm)! 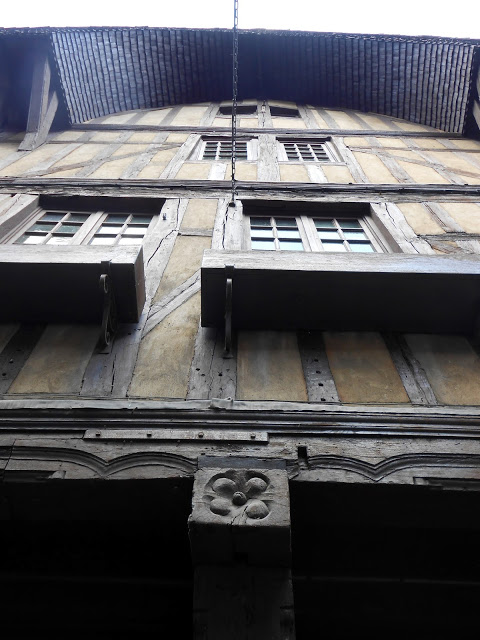 Troyes is a town simply full of the most incredible churches, edifices and museums, whilst the whole of its historical centre is crisscrossed by streets and meandering alleys composed of buildings that date back to the Middle Ages.

With its typical colombage troyen, the Maison du Boulanger is a suitable setting for any exhibition; calm and peaceful, with its centuries-old wooden beams creating a unique atmosphere.

Access to the first floor is at the back of the building, via a wooden staircase that overlooks a tranquil courtyard and leads onto the subdued lighting of rooms illuminated in this case by the colour of these works.

The poster that so mesmerized me on my first encounter was but one of this artist’s many studies of floral and vegetal forms to be seen at the Maison du Boulanger. More of Jean Marrel's work can, of course, be seen on his site (www.jean-marrel.fr).
Most of the photos below in this post are details of the full paintings. As the original works themselves are often quite large, that magical quality is magnified all the more.... 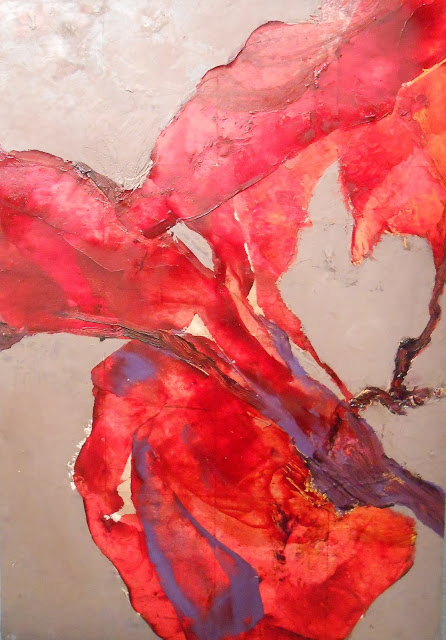 The imposing forms of exotic amaryllis and iris lead onto flurries of nasturtium, the ‘stencilled’ starkness of flowering courgette, the dense bodies of ripe figs and the dramatic stalks, leaves and petals of other more unassuming plant types. All of these seem to vie for your attention; their bold contours and colours drawing you in. At this point, you are caught by a strange quality.

Indeed, while these works are realistic in that you can ‘sense’ the vital essence of each plant, this is no slavish, faithful reproduction of the each detail. However, this is no impressionist approach either; it goes beyond a fleeting impression of vitality.

While I could not appreciate this quality from the street poster alone, I was able to 'live' it in the exhibition. Be it the spindly roots of a radish plant or beet; the twisted, convoluted leaves of garlic; the radiating stalks of an umbel; the bulbous forms of quince fruit or the pitted skin of a lemon, each study makes you ‘feel’ the life of the subject both from a distance and at close quarters.

Viewed from afar, the essential shape of each subject with its defining characteristics is rendered. This is just as valid for the plant studies as for those of the farmyard chickens, for example. Sadly, the latter were not part of the exhibition, but can be seen on the artist’s site.

As you will see there, Jean Marrel’s paintings of hens truly capture the busy, bossy, no-nonsense aspect unique to such birds, intent on going about their business, head cocked, feet strutting… and yet without a single discernable feather!

Apparently the artist does not seek to represent a 3-dimensional reality that is reliant on perspective and detail, but instead leans towards a more 2-dimensional approach that recreates the vital essence of the subject, be that flora or fauna. 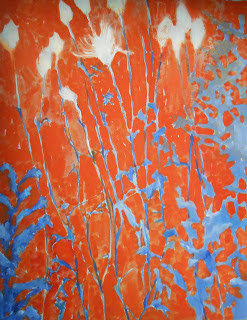 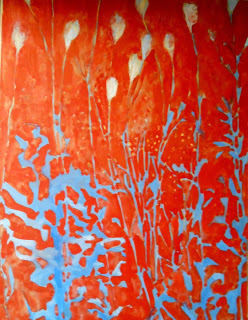 In some ways this reminded me a little of the Japanese woodblock art that Baudelaire termed “the Asian image d’Epinal technique” with its evocative forms and blocks of colour.


However, that would not be sufficient to fully describe the studies here.

Apparently, Jean Marrel frequently presses his plants and flowers to produce a 2D view that he then recreates on a given medium. Dramatic contours, sinuous lines and bizarre shapes are captured in the flattened version of the original subject, but this process also releases a new energy and creates new forms that may lead onto other interpretations. 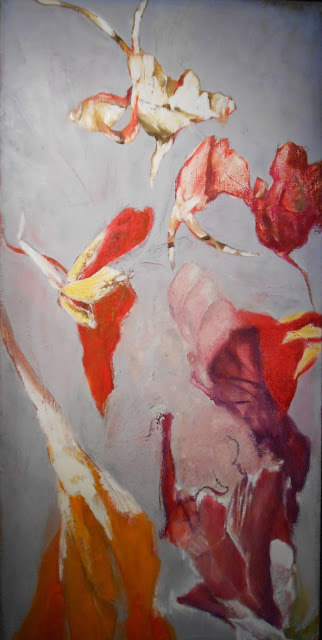 Far from being caught prisoner on canvas, with their life suspended, the subjects seem to germinate and metamorphose. They indeed grow outward, with the rustle of intertwining shoots and leaves, a flourish of petals that float and dance and often seem to assume the billowing outlines of human forms or the flight of birds. Rather than a dull study of nature morte, these paintings ultimately have a poetic force of their own, like a form of static electricity that catches you unawares.

Although the English term, 'still life', is more appropriate than the French nature morte, it still falls short as a description of this work…. This is no trompe-l’oeil to show the transience, futility and Vanity of our existence. Indeed, this deceptive ‘flat’ approach produces a depth that serves to emphasize the hidden existence of all things in the natural world and their gradual growth and transformation towards new forms and movements.

Central to this process of contemplation and recreation, is the actual technical aspects of the creative process. Jean Marrel’s work does not simply create an overall image of vitality at a distance, which dissolves into a seemingly haphazard group of paint strokes and layers when seen up close. Indeed, here the painting technique become an essential part of the subjects’ vitality.

The paint work and its reworking, the contrasting textures, effects and responses of the materials used, are at the heart of this organic process of creation, and thus seem to become a living part of the organism studied. In this manner, the rough surface acquired by several applications of paint or from scraping, scratching or worrying the paint layers, may either be harnessed to reflect the essential vitality of a living form, or may actually ‘lead’ the artist in his design.

Rugged edges followed by smoother patches may represent silky petals with their strange veins and markings; ridges may become essential in the portrayal of stalks; cracking, spotting and stress may highlight leaves, seeds and pods… Likewise, the texture of the paint itself seems to emphasise the vitality of the colours employed. In this way, smooth liquid paint seems to bring out the fluid vibrancy of certain tones; chalky mediums highlight contrasting colours; dull milky layers of paint underline the enameled shine of other areas. It goes without saying that the colours themselves are just beautiful…

The whole of this approach creates an art that I thought was really unique and I spent quite some time looking at these works, from near and afar, appreciating their skill. These works make the viewer ‘feel’ the vital tension within, and the life force that radiates out. The whole visual experience stimulates other senses; in a strange form of synaesthesia, I suppose. As I love some of the weirdly beautiful forms to be found in the plant world, precisely for this same quality, this exhibition was really interesting.

Jean Marrel’s art seems to have no dark undertones. However, the hidden vitality of his subjects, their capacity to assume almost human forms and above all the disconcerting ability of the art to mimic life and the organic living process reminded me a little of the novel by the fin-de-siècle writer J.-K. Huysmans (1848-1907) – A Rebours – which was published in 1884. It must be said that the morbid, extreme aestheticism and the premise of the supremacy of cold artifice over Nature of Huysman’s writing finds no trace in the paintings of Jean Marrel; quite the contrary.

Nevertheless, Against Nature (the English title) is a novel well worth reading, with the ultimate message that you cannot go against the current of the life forces of Nature or those of (the Catholic) faith; these will all inevitably overpower you. The story focuses on the withdrawal from bourgeois society of its protagonist, Des Esseintes, into a world of Decadence. This universe of mystical symbolism, aesthetic and intellectual (over)stimulation eventually implodes, leading the anti-hero to flee this stifling, bewelled anti-life…

Below is part of the description of the exotic plants Des Esseintes has chosen precisely for their ability to go ‘against nature’.

This wonderful art had held him entranced for a long while, but now he was dreaming of another experiment. He wished to go one step beyond. Instead of artificial flowers imitating  real flowers, natural flowers should mimic the artificial ones.
He directed his ideas to this end and had not to seek long or go far, since his house lay in the  very heart of a famous horticultural region. He visited the conservatories of the Avenue de Chatillon and of the Aunay valley, and returned exhausted, his purse empty, astonished at the strange forms of vegetation he had seen, thinking of nothing but the species he had acquired and continually haunted by memories of magnificent and fantastic plants.
The flowers came several days later.
Des Esseintes holding a list in his hands, verified each one of his purchases. The gardeners from their wagons brought a collection of caladiums which sustained enormous heartshaped leaves on turgid hairy stalks; while preserving an air of relationship with its neighbor, no one leaf repeated the same pattern.
Others were equally extraordinary. The roses like the Virginale seemed cut out of varnished cloth or oil-silks; the white ones, like the Albano, appeared to have been cut out of an ox's transparent pleura, or the diaphanous bladder of a pig. Some, particularly the Madame Mame, imitated zinc and parodied pieces of stamped metal having a hue of emperor green, stained by drops of oil paint and by spots of white and red lead; others like the Bosphorous, gave the illusion of a starched calico in crimson and myrtle green; still others, like the Aurora Borealis, displayed leaves having the color of raw meat, streaked with purple sides, violet fibrils, tumefied leaves from which oozed blue wine and blood....

As I said, this decadent vision of Nature is far removed from the world view that sems to emerge through Jean Marrel’s work. The artist here appears to view Nature as a means to embark on an almost spiritual quest of vitality, using art to embrace life in all its changing forms.

Again, if you want to see the 'real thing', just check out those chickens! 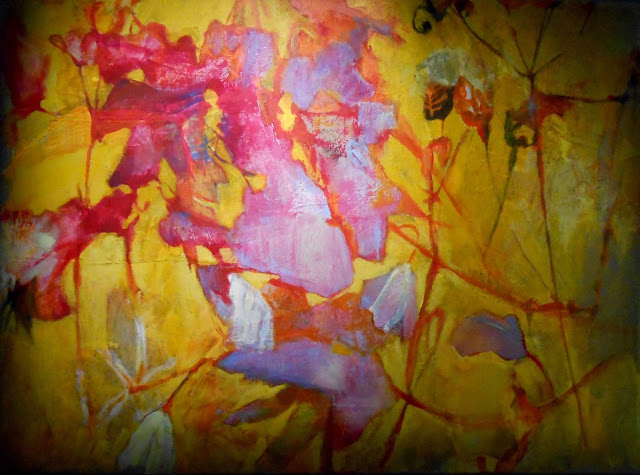