Over the years I had been dying to watch the televised adaptation of Winston Graham's saga, Poldark. This was broadcast in the mid-seventies, to great acclaim, and yet I never got to watch a single episode. I can't remember the exact reasons for that, but I do remember being the only person in class who had no idea who Demelza and Ross were, let alone the nature of their relationship. 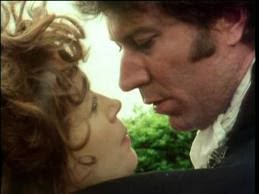 Perhaps it was precisely because of this romantic twist that I wasn't allowed to follow the series, although I used to hear about the latest gripping episode on Monday morning at school.


Either way, it was only in January of this very year that I finally managed to see what I had missed out on in my early teenage years. I ordered a second-hand box set of the Poldark TV series and wasn't entirely sure what to expect...

This was 70s viewing that offered a heady mix of heightened emotions, excessive ambition, material greed, base instincts, and honorable duty... not to mention those romantic storylines interspersed throughout.

All this costumed melodrama burst onto modest television screens at a time before the arrival of the soaps-and-series formats that are so familiar today and in a era when television offered only three channels. Even Dallas had yet to be created. This meant that every Sunday night Poldark held onto a captive audience that was entranced by the swashbuckling action, larger-than-life vilains and beautiful, virtuous beings.

They were fascinatined by the passion and drama that crashed around the plot much like the waves that opened each episode, and were likewise ensnared by the cliffhanger event that marked the end of each weekly fix of Poldark titillation. No wonder I felt left out in the cold!


Watching the series almost forty years after its creation, I anticipated a quaint but staid bodice ripper, with a bit of gritty social realism offered by the hardships suffered by the mining/fishing-cum-smuggling communities, thrown in along with the usual potboiler staple ingredients. However, despite a few outdated filming techniques, the occasional 'wooden' stage set and clunky sub-plots, I was surprised to see how well the series has stood its ground. Above all, I enjoyed the dynamism of many of the actors, and yes, the dynamics of Demelza and Ross's relationship that were so well brought to life by Angharad Rees and Robin Ellis.

Set in 18th century, the story certainly offered the scriptwriters a rich opportunity to introduce a wealth of idiosyncratic characters from all different milieux - all brought together by the Poldark name and the feuds that drove the family onwards, through pride and ambition and yet inevitably seemed to split its individual members apart. The baudy behaviour of rascals such as Ross's housekeeper Jud is set in parallel with the lecherous dealings of the reptilian Reverend Osbourne, brilliantly played by Christopher Biggins, both entertaining and shocking in equal measure. Their worldly antics are offset by the cold-blooded treachery of the brooding and beetle-browed George Warleggan, Ross's vengeful arch enemy. Alongside this is the love-interest element, largely focused on Ross, his thwarted love for starchy ice-maiden Elizabeth and of course the woman who occupies the other corner of the triangle, Demelza. From the wildcat wench who features in the first episodes, she becomes the fiesty female of fiery hair and temper - transformed but not entirely tamed by Ross. Other romantic sidelines are pursued in the plot, to greater or lesser degree and success, but the keystone to the plot remains the Poldark family relations.
The setting for all of this breathtaking drama, was one of equally stunning nature; the rugged moorland and spectacular coastline of Cornwall. It was mostly this that drove me to watch Poldark - the desire to view landscape that had been familiar to me and in so doing, escape the cityscape around me here in the present. Coming from Cornwall, though not actually Cornish, I wanted a hefty fix of homeland. The Poldark series 'delivered', though I wish even more had been shown of the land and sea.  However, I was also dying of curiosity to see the scene that I had witnessed in person, back then as a child in the mid-seventies...

Living in the countryside, in an old converted farmhouse with its battered barns, us children were drawn to the activities of a full film crew that was shooting in the churchyard just across the fields. Of course, we had never heard of Poldark, but the filming seemed interesting enough in the drizzly winter weather of the school holidays. Better still, however, was what the crew left behind at the end of the shoot. Indeed, the scene dealt with the burial of a family member, showing the mourners gathered around the open grave... a grave that had apparently been dug especially for the filming of the episode. It was convincingly deep, and was covered up with wooden planks at the end of filming. This in itself was tantalizing and needless to say, called for closer inspection.

Never a tomboy, but always ready for a bit of action, and perhaps rightly labelled a 'scallywag' by a neighbour across the valley, I didn't need persuading to jump down into the grave with the boys.

It was a great; authentic skeletal remains protruded out of the soil on the sides of the hole. What wasn't so great, was the attempted ascent out of the depths. The boys shoved and hoisted each other up and out, but left me in there, scrabbling against the earthy flanks, trying to get a hold, but merely filling up my boots with dislodged soil. Finally they relented and hauled me out, and nothing more was said about the event, or indeed the filming, although we heard later that the farmhouse of one of the boys from school had been used as Nampara - Ross's home.


It was naturally a true pleasure to see a few fleeting images of our old church in the Poldark series, but more remarkable still was to see the funeral scene, filmed from down inside the grave, just as I had experienced it! My children weren't impressed, but I did feel honoured to have been there.


We moved away from the country in 1976. We left behind the farmhouse, hill walks, mine-shaft dodging on the moors, treks across muddy fields, past herds of menacing cattle to go to school or over towards St Ives in favour of relatively 'glamorous' townlife. 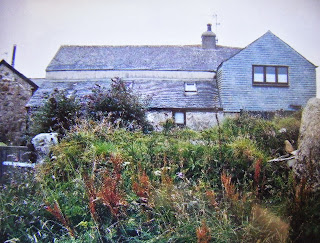 As much as I was excited to live in a 'big' town, in a 'real' house, and had been counting the days till we would leave, I can remember swearing to myself then that one day I'd come back and buy our farmhouse. I've followed the changes the old place has undergone over the years, but it makes me sad to see it now.


It has become a holiday let, and is barely recognisable. It can even be viewed on the internet, but try as I might I can't find in these glossy images any remains of the old ramshackle house which itself dated from the 18th century - the Poldark period. The only thing that hasn't changed over the years is the house name, which I won't mention, for obvious reasons, and the distinctive chimney which us children would clamber up to escape from punishment merited by our latest escapades. I don't remember if we even told our parents about our grave affair...

Well, just for good measure for my virtual memory box - this post - I'll include a weird video clip of a wedding I attended as a child. This has absolutely no relevance to Poldark. I was the one fidgeting and flouncing around in the pink checkered dress. I don't know how the cow came to be there, but this was the wild seventies, after all.


Since buying my DVD set of Poldark, I have noticed that the whole series has been uploaded onto YouTube, so this might give rise to another generation of Poldark fans.