Collage and scraps, bits and pieces....

Holiday time, however the days have been eaten into by colds, flu and good old school work so that there have only been scraps of vacation time to savour, and strong doses of cabin fever to tolerate in between times. Despite all that, there have been some very healthy positive moments, Spring is on its way and the blackbirds have started to sing in the early morning.

Over the last few days my attention has also turned to scrap effects since I am a 'sucker' for things related to collage effects/altered art imagery and mixed media visuals. In addition, I've been looking into the world of digital scrapbooking....
This appears to be a marvellous garden of virtual delights just waiting to be explored and cultivated - computer-savviness permitting (or rather the lack of it...).Copies of Victorian cut-out sheets of scrapbook flowers, animals and insects seemed to be quite commonplace when I was little and available enough for me to take a rather blasé attitude to them. How I wish I'd held on to some of the more exuberant and decorative ones today!
These in turn seemed to influence collage-themed decorated boxes and packaging. Although I keep hold of the Crabtree and Evelyn box above mostly for its sentimental value, I used to love its design which enclosed a beautiful heart-shaped soap...many years ago. 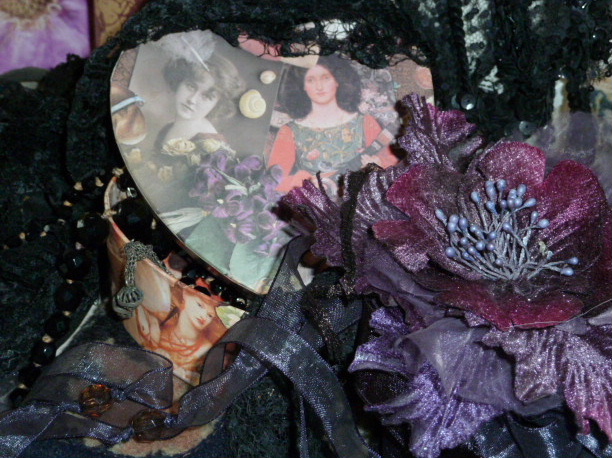 At the time they simply seemed to be just scrap...I can't now remember where I obtained the card butterflies in the first photo, but they seem to go well with another childhood staple - embossed tin insect badges. Apparently they were made in Japan; the specimens here have followed me around for years now.

I recently decided to use some vintage-style scraps that I'd collected in order to do a collage. Had I known that my favourite haunts for picking up scrap supplies were going to cut down on their stocks due to changes in taste and the economic climate I would have hoarded far more. My magpie instinct certainly failed me this time!


My last remaining ivy scraps I used up to decorate the collage as I love ivy in all its forms. Apparently it had its own language and signification in the Victorian period....Namely eternity and fidelity. 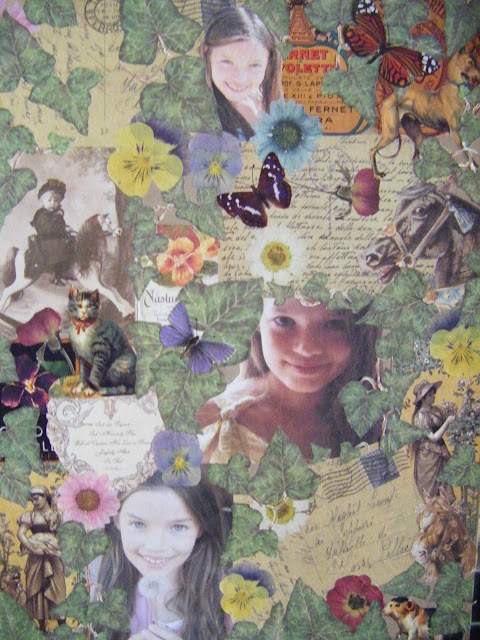 Perhaps we tend to think that scrapbooking was 'invented' by the Victorians as an appropriate genteel pastime for young ladies, thus providing a livelier alternative to embroidered samplers. However, scrapbooks have a far older, and more varied history.  Indeed the precursors of the scrapbook date back to the 15th century with the 'Commonplace books', used as a means to gather material such as recipes, verses, quotes etc. These books gradually led to the emergence of 'friendship albums' and took on a more personal tone as texts, illustrations and souvenirs were included.

Interestingly, what is considered today to be a largely female pursuit was initially established by male figures in history - some of whom being well-known individuals.... It was a certain James Granger who encouraged personal annotations in books in 1775 with his publication of a historical book bearing blank pages at the end to be used by readers to record their own personal history. This is said to have set off a trend for books with extra pages, labelled 'grangerizing', as people took an interest in tracking their life stories.


The first 'real' scrapbooks of the early 1800's did not preserve or embellish  photographs since the camera was yet to be invented. These albums could thus be collections of scrap mementos, calling cards, religious verses, newspaper cuttings, engraved images, sentimental poems and letters... Thomas Jefferson, no less, is said to have been one of the first famous scrapboard enthusiasts, filling his albums with newspaper clippings tracing his term of office as president. In 1825 'The Scrapbook' was published and offered advice on how to use one's scraps to fill an album. It was to be yet another man, a certain John Poole, who was to leave his influence on the development of the scrapbook through his publication 'Manuscript Gleanings and Literary Scrapbook' in 1826. As interest grew in scrapbooking albums were printed in order to meet market requirements and likewise differing scrap was produced to satisfy this enthusiasm. These scraps were generally highly decorative illustrations and texts that could be cut and pasted into place. 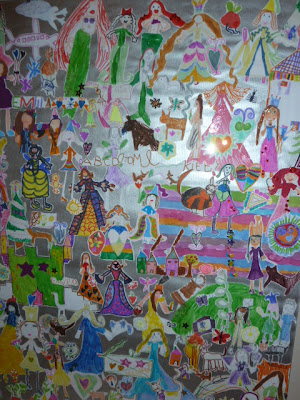 We may know Mark Twain for his 'Adventures of Huckleberry Finn', from the latter part of the 19th century, however it was his patented invention 'The Mark Twain Adhesive Scrapbook' with its pre-glued pages that was to be one of his most popular books and proved to be a highly lucrative venture. Victorian scraps were brightly coloured lithographs that replaced earlier scraps that had been black-and-white engravings tinted by hand. Many later models, often from England and Germany were pre-cut sheet designs, sometimes relief stamped and embossed to produce a certain texture and realism. These images would generally have different themes and the pre-printed pages in the scrapbooks would encourage enthusiasts to collect more scraps to fill their own albums.

Naturally it was the advent of the camera, and its subsequent entry into mainstream social practices that would truly personalize the scrapbooks of each individual scrapbooker. Although photography was introduced by Louis Daguerre in 1837 with his daguerréotype, this photographic process took some years to establish itself. The introduction of paper photographs in the latter part of the 1800's and the mass production of the Kodak Brownie camera with its roll film at the end of the century democratized photography, making it more accessible to the masses. Not surprisingly the photograph was to be an integral part of the scrapbooking creative process.


Interest in scrapbooking grew and evolved right up to the First World War when interest declined a little and the economic situation in the aftermath of the war years was such that many scrapbook-associated businesses went bust. This slump in scrapbooking activity was reflected in the Second World War when enthusiasts declined in number again.

Today, of course scrapbooking has a worldwide popularity and is multi-facetted since a myriad of possibilities has been opened up by old techniques that have been updated and revamped combined with all that digital representation has to offer, alongside the internet. I just can't wait to experiment a little!